Game Changer Wrestling closes out Homecoming Weekend this Sunday and it promises to be a fitting conclusion to said weekend’s festivities. Part 1 of GCW Homecoming sees the company’s titles, including its top prize, being put on the line. GCW Homecoming 2022 Part 2, live from The Showboat in Atlantic City, New Jersey, has its own action to present. Included in said action are two company debuts from international stars. This event will be open to the public, so for those that are in the area, consider making the trip to see the show in person. The action will also air live on FITE. Here’s what to expect as GCW Homecoming Weekend comes to a conclusion. 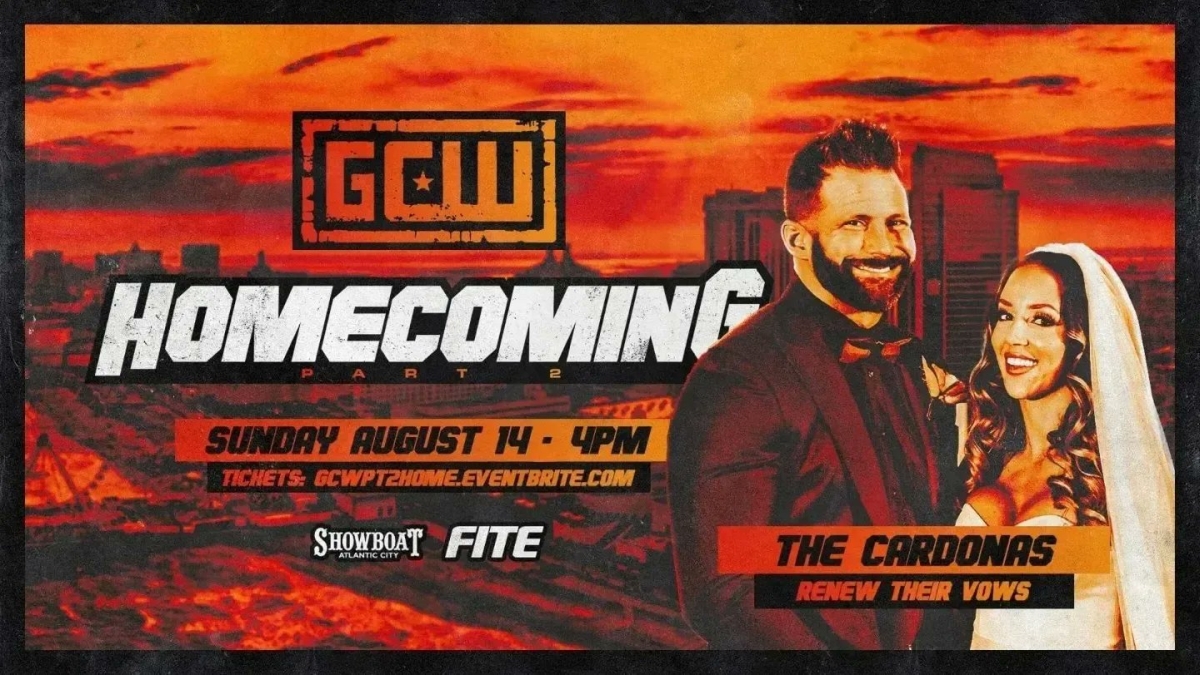 The Cardonas Renew Their Wedding Vows

If there are any two wrestlers that can raise the ire of the GCW faithful with minimal effort, it would be The Cardonas. Ergo, when Matt Cardona and Chelsea Green take to the ring to renew their wedding vows this Sunday, expect nothing short of a vitriolic response from the crowd. Keep in mind that this situation can be considered one where the participants return to the scene of the crime. At last year’s Homecoming event, Cardona became one of the most hated men in wrestling when he captured the GCW World Championship from the defacto face of the company, Nick Gage. Since then, Cardona and his group continued to appear at the promotion’s various events, whether it was to compete or simply rile up the fans in attendance.

At GCW Homecoming 2022 Part 2, The Cardonas renew their vows, though this isn’t to say that it promises to be a peaceful affair. Even if no wrestlers interfere, it would be wise for the couple to be cognizant of airborne beer cans, pizza cutters, and other foreign objects from the crowd. Throw in the fact that the original WWE Tough Enough winner, Maven, will be officiating the ceremony and this promises to be a segment not to miss. 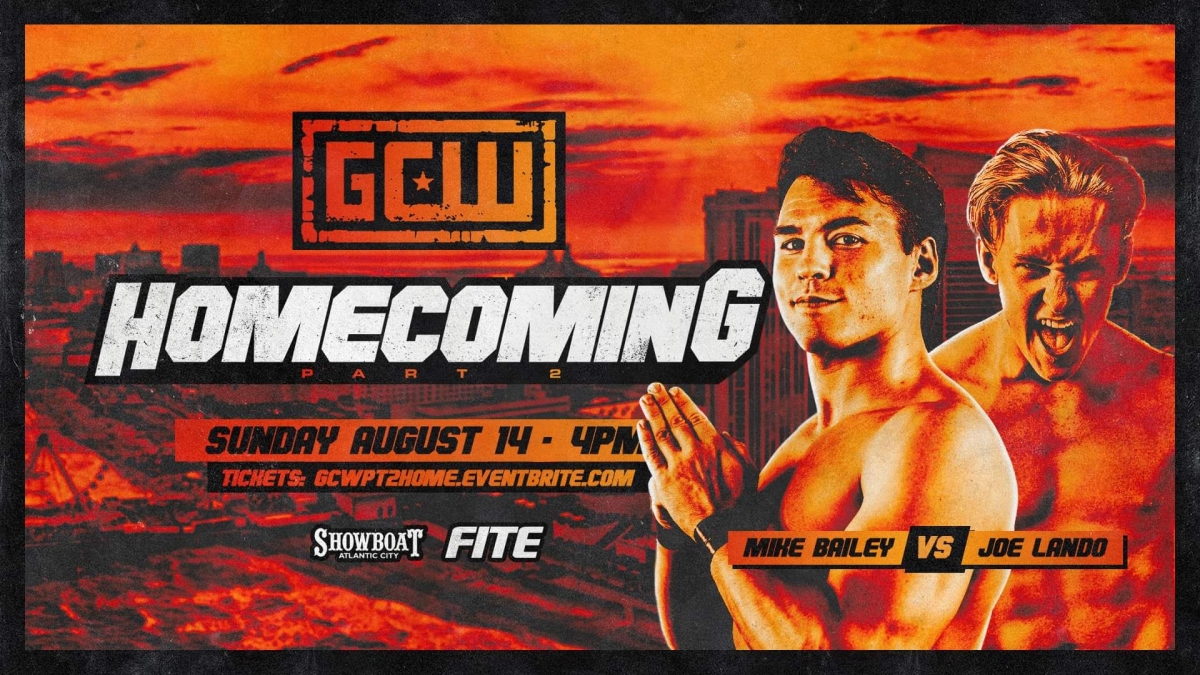 In one of the Game Changer Wrestling debuts set for GCW Homecoming 2022 Part 2, English-born wrestler Joe Lando steps into the promotion for the first time. Known for his fast-paced, high-flying style, he’s made an impression in the United Kingdom and abroad in short order. If he isn’t catching opponents off-guard with lightning-fast strikes, he can be seen taking to the skies with techniques such as his Shooting Star Press. 2022 has been a particularly busy year for Lando, as he’s competed in such promotions as Revolution Pro Wrestling and PROGRESS Wrestling. Not only does this upcoming match mark his GCW debut but it will be the first time he competes on American soil. Furthermore, he has a tall challenge ahead in the form of “Speedball” Mike Bailey.

Anyone familiar with the current independent wrestling scene with undoubtedly be familiar with Bailey’s extensive work. Even those that may not follow indie wrestling as closely may have seen him on IMPACT Wrestling programming, where he’s not only a staple of the company’s X-Division but stands as the reigning IMPACT X-Division Champion to boot. This doesn’t even begin to touch on his work in organizations including REVOLVER, Black Label Pro, and of course, GCW. Bailey may be respectful toward his new opponent, but this doesn’t mean that Lando is guaranteed a victory. Keep an eye on what promises to be an encounter taken at breakneck speed. 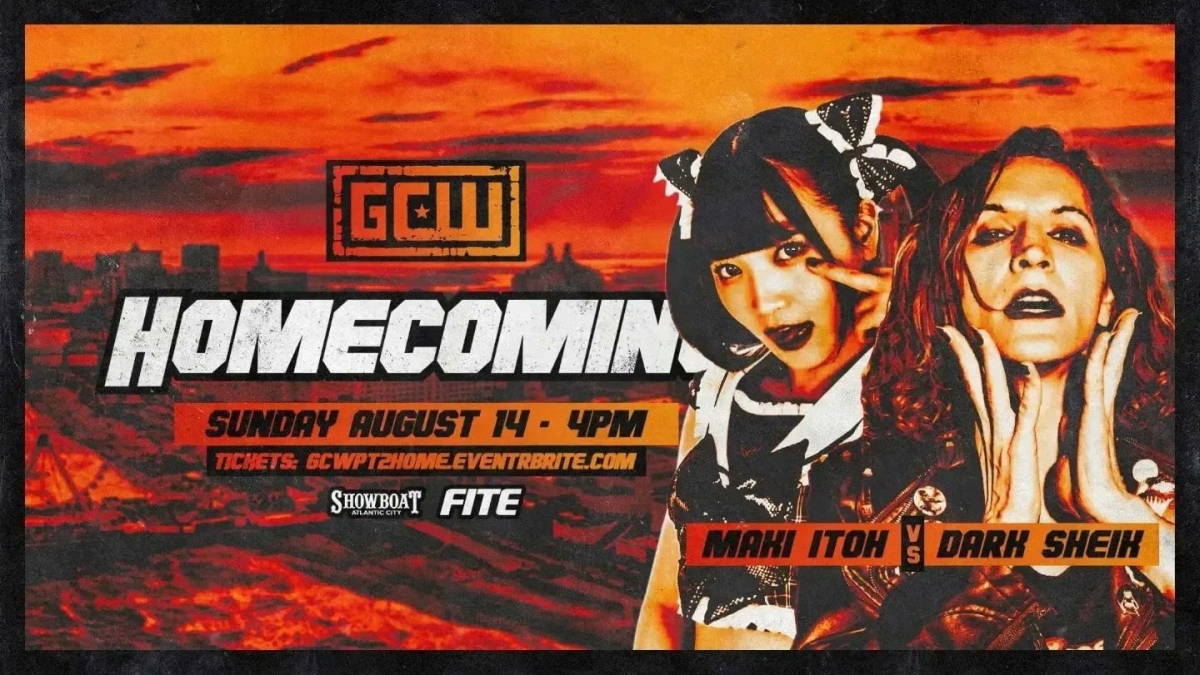 Another individual set to make their GCW debut is none other than “The Fired Idol” herself, Maki Itoh. As her moniker suggests, Itoh initially found fame as an idol performer in Japan before eventually making her way to the colorful world of professional wrestling. She’s one of the top stars in her home promotion of Tokyo Joshi Pro-Wrestling, where she’s a 2x International Princess Champion. However, she found fame worldwide due to her undeniable charisma. Whether it was through her pre-match musical performances, gutsy battles from bell to bell, or even her social media presence, “Itoh-chan’s” popularity on a global scale can’t be denied. It may have taken Itoh quite some time to get to GCW, but there’s no doubt she will be more than welcome by the company’s passionate fans.

2022 has been another strong year for Itoh, not only due to her work in TJPW but her continued appearances for such organizations as Pro Wrestling NOAH and All Elite Wrestling. However, this Sunday, she will have to focus on her GCW debut as she takes on a veteran in the form of Dark Sheik. This promises to be a unique first-time encounter, largely due to the contrasting in-ring styles of the competitors involved. Sheik is known for being a high-flying star, unafraid of taking to the skies to seize victory. Furthermore, she comes into this match with over 2 decades of experience under her belt, which dwarves Itoh’s nearly 6-year wrestling career. Can experience lead Sheik to victory, or will Itoh make her GCW debut a successful one at Homecoming 2022 Part 2?

Stay tuned to the Last Word on Pro Wrestling for more on this and other stories from around the world of wrestling, as they develop. You can always count on LWOPW to be on top of the major news in the wrestling world, as well as to provide you with analysis, previews, videos, interviews, and editorials on the wrestling world. GCW Homecoming 2022 Part 2 is set to air Sunday at 4 PM EST on FITE. Tickets are also available via Eventbrite.