Tokyo Joshi Pro Wrestling (TJPW) has been getting pretty popular with the western audience lately and some of that success is down to the social media popularity of one of their stars. The foul-mouthed fired idol Maki Itoh has been quickly growing in popularity since debuting in 2016 but just who exactly is she?

Well, Maki Itoh was first introduced to the world as an idol back in 2012 debuting for LinQ, an idol girl group based in her hometown of Fukuoka, Japan. While she didn’t make her official debut until later on, she did compete in DDT on occasion. This would be in various battle royals and other special attraction matches, mostly to promote her idol group. Even back then, it was clear to see that Itoh had a large personality, getting a lot of camera time by using the tricks we know her for such as flipping people off and even using her signature headbutt.

Originally Maki joined Tokyo Joshi Pro part-time to gain more popularity as an idol and eventually made her debut against future rival and tag partner Miyu Yamashita in late 2016. Her outlandish attitude quickly won over the crowd, which is almost unheard of for someone that has just debuted. After just three months, Maki soon used this cockiness to her advantage, challenging Mizuki, a new arrival to TJPW to a match. Although her confidence couldn’t get her the win against the far more experienced Mizuki, she went with the old saying “If you can’t beat them, join them.” That is exactly how the Itoh Respect Army was formed, creating many whacky moments that TJPW is known for.

During her time as an idol for LinQ, she wasn’t the most popular member, even her management team lacked faith in her. This caused her segments in shows to get reduced or cut entirely. Behind the scenes, she had to sell a certain amount of tickets or she would be fired. Despite reaching that threshold, she was still fired from the group. Maki found this out via social media when her name wasn’t included in the official lineup announcement.

What brought her more attention was her reaction to the news. During her match with Takigawa in an Idol Lumberjack match, the LinQ music began to play until Itoh ran out yelling. She shared that she had been fired and was no longer an idol, which she found out earlier that day. This wild act earned her the number one trend on Twitter in Japan and was the first of many times she would end up going viral in her career.

With her idol career now behind her, Maki had the chance to focus more on professional wrestling. She would have more matches in both TJPW and DDT. Maki and Mizuki did turn the Itoh Respect Army into an idol group briefly. They sold CDs and even had a music video. For the next year, she was only growing even more in terms of popularity despite her in-ring success being up and down. International fans were starting to notice Maki as she was learning English; fans found her use of all kinds of profanity outrageous.

2019 was a huge year for the fired idol as Maki finally got her biggest shot yet. During WrestleMania week, DDT held their first-ever show in the United States. The card included Maki taking on Miyu Yamashita. Despite not picking up a victory, she won the hearts of the fans. She even showed up at WrestleCon’s Penis Party, also during Mania week. Throughout the rest of the year, she went on to fight the likes of Aja Kong, went past the first round of the Tokyo Princess Cup, and got a few reigns as DDT Iron Man Heavy Metal champion. 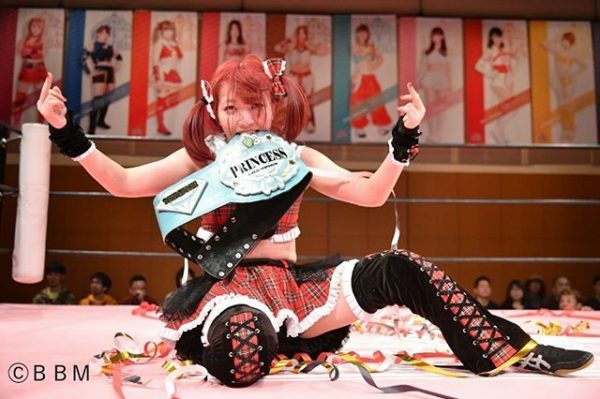 With all eyes on her, it made complete sense for Maki to start looking towards some gold. The perfect crown was the newly created International Princess Championship. At the time held by ex-TJPW star Yuna Manase. The co-main event was set for October 19th and in a hard-fought battle, Maki finally picked up a championship in the promotion. Throughout her 78 day reign she had two successful defenses; against British wrestler Nightshade and Up Up Girls’ Hikari Noa.

For the ups, there are also downs: 2019 saw the Itoh Respect Army fall apart. Mizuki and Maki had a match signifying the break up however, all is not lost. Soon after, Maki formed the NEO Itoh Respect Army with DDT star Chris Brookes which helped boost her international presence, especially with Brookes repping the NEO Ito-Respect merch in the UK.

While she had the second-longest reign in the championship’s short history, it was about to come to an end at the start of 2020. On January 5th, she and NWA World Women’s Champion Thunder Rosa were the main event for the International Princess Championship. These two had been going back and forth since Rosa debuted in TJPW. This put an end to their rivalry with Rosa picking up the win and taking the title from Maki.

Despite losing her title, Maki had another crack at the international scene. She appeared at Pro Wrestling: EVE in London, UK to take on Irish freelancer Session Moth Martina. This match is very accessible to the English speaking market, once again turning Maki Itoh into a viral star within the wrestling community. During the global COVID-19 pandemic, TJPW continued to run shows. Maki spent the time getting better than ever in the ring, making it to the semi-finals of the Tokyo Princess Cup 2020 and being involved in a huge tag team match alongside WWE’s Sareee to face Aja Kong and Miyu Yamashita.

To say all of her hard work in the past four years has paid off is an understatement. While at times she hasn’t been the most polished wrestler on the roster, she has proven she can hang with the best of them. Her Jan 4, 2021 match with her long-time rival Miyu Yamashita was touted as arguably the best match of her career. While she didn’t get the win, she received the respect of Yamashita.

To continue what is set to be quite possibly her biggest year yet, All Elite Wrestling announced Maki Itoh as one of the eight Japanese women featured in their upcoming tournament. This title eliminator tournament is to crown a number one contender for Hikaru Shida’s AEW World Women’s Championship, with eight women from Japan and eight from the US battling it out. Whether you love her or hate her in the ring, there’s just something so amusing about her antics on social media that you just can’t help but wonder what nonsense she will tweet next.