This upcoming episode of ChocoPro may be the most stacked yet. For the first time ever, Gatoh Move Pro Wrestling will hold a double main event show, where matches will feature competitors for the AEW Women’s World Championship Eliminator Tournament. As if this wasn’t big enough, one match will be officiated by the current AEW Women’s World Champion herself. If you aren’t convinced that this is a show to watch, here is a more thorough rundown on the action to come. 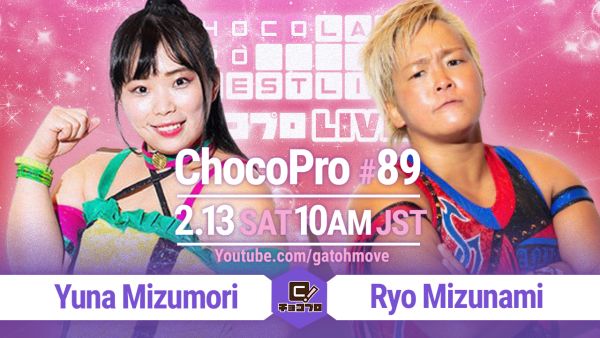 Affectionately known as “Aniki” to many, Ryo Mizunami was one of the many competitors announced for the AEW Women’s World Championship Eliminator Tournament. She made her first AEW appearance at their inaugural pay-per-view in 2019, Double or Nothing. On this night, she teamed with future AEW titleholders Riho and Hikaru Shida. They picked up a win over Emi Sakura, Yuka Sakazaki, and Aja Kong, all of whom will be involved in the tournament as well. These days, Mizunami remains a prominent component in SEAdLINNNG as part of MAX VOLTAGE. Mizunami will also be making her first ChocoPro appearance since this past November, when she battled and defeated Lulu Pencil on episode seventy.

Mizunami’s opponent will be none other than Gatoh Move’s “Pineapple Girl,” Yuna Mizumori. Her last ChocoPro appearance took place on episode eighty-six, when she teamed with fellow idol An Chamu in a winning effort over Pencil Army‘s Lulu Pencil and Emi Sakura. It’s important to note that this won’t be the first singles encounter between Mizunami and Mizumori, either. In July of 2019, despite a spirited effort by Yunamon, it was the former two-time Regina Di WAVE Champion in “Aniki” that picked up the victory. Now, over one year later, will a more experienced Mizumori emerge supreme? 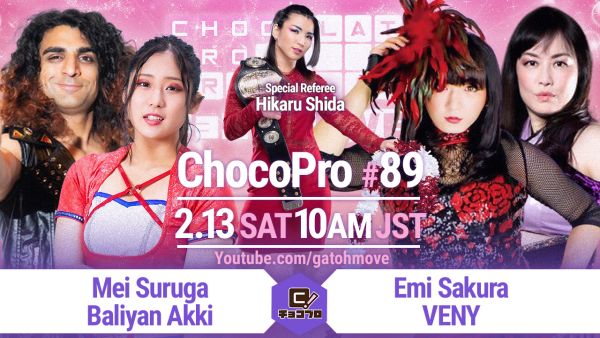 Luck has not been on the side of Best Bros, the Asia Dream Tag Team Champions, as of late. Case and point, on the previous episode of ChocoPro, Mei Suruga and Baliyan Akki battled the duo of Emi Sakura and Cherry. After twenty minutes of competition, the match ended in a draw, no clear winning team being declared. Suruga was another competitor announced for the aforementioned AEW women’s tournament. Thus, it would stand to reason that she would desire to build as much momentum as possible. On this upcoming episode of ChocoPro, Suruga and Akki may be able to do exactly that, though not without a fight.

Emi Sakura may have trained Suruga, but since she is also part of the AEW women’s tournament, the current AEW star won’t be looking to simply hand her protege a victory. This is especially true given the guest partner she has brought in for this episode. VENY, also known as ASUKA, was one of the more surprising names announced for the tournament in question. “The World’s First Genderless Professional Wrestler” has been incredibly successful during 2020, whether in Dramatic Dream Team, Diana, or elsewhere. She is set to make her first ChocoPro appearance since this past August, when she bested Yuna Mizumori on episode forty.

As if this main event couldn’t feel any more important, Sakura announced that it would be officiated by a special guest referee: Hikaru Shida. The current AEW Women’s World Champion is currently in Japan to help produce matches for the tournament. Not one to miss revisiting her old stomping grounds, Shida accepted Sakura’s invitation to return to Ichigaya Chocolate Square, where she will serve as the special guest referee for Best Bros’ match against Sakura and VENY. With all the talent involved, this will be one ChocoPro encounter not to miss.