ChocoPro #210 is a rarity in that this show will air at 7 PM in Japan, which means that fans of the show should prepare accordingly. In any event, this should prove to be yet another enjoyable show, featuring two tag team contests. Gatoh Move Pro Wrestling recently announced its return to live events this May, but for those that have grown to love ChocoPro since its inception in early 2020, rest easy knowing that this long-running YouTube show has no end in sight. Here’s what to expect heading into the latest episode. 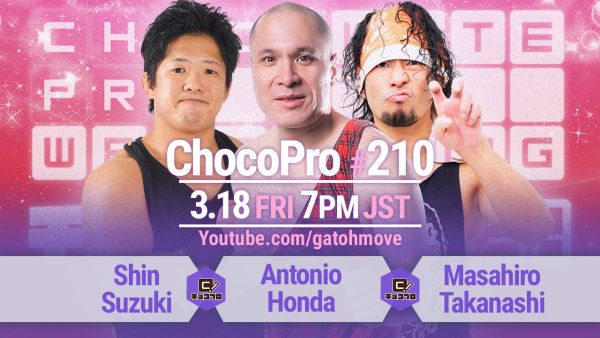 Boasting solid athleticism and healthy enthusiasm, Shin Suzuki enters ChocoPro #210 with one of the greatest challenges in his career ahead. This is especially true when one considers that Suzuki has lost his previous three matches in Ichigaya Chocolate Square, his most recent being a loss alongside Yuna Mizumori against the former Asia Dream Tag Team Champions, Best Bros. Suzuki has kept himself fairly busy outside of ChocoPro, competing in the DISCUS PSYCHO 20th Anniversary event earlier this month. With Gatoh Move’s aforementioned return to live events looming, a victory on this episode would be invaluable.

To win would be a tall task, however, as he faces Antonio Honda and Masahiro Takanashi in a three-way encounter. The beer-loving Takanashi has been enjoying considerable momentum since capturing the Asia Dream Tag Team Championship alongside Chris Brookes, though his formidability as a singles wrestler can’t be ignored. Meanwhile, this marks Honda’s first ChocoPro match since Episode #207, which saw him fall in tag team action against Calamari Drunken Kings. Gatoh Move’s resident “Honey Hunter” is as tricky as they come, so one would be wise to keep an eye on him. 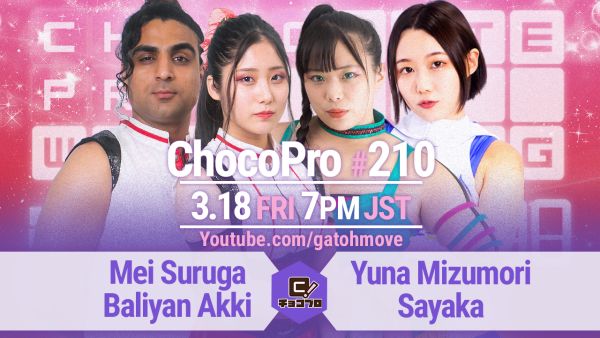 In the main event of ChocoPro #210, the former Asia Dream Tag Team Champions will be in action. Despite losing their titles to CDK last month, Mei Suruga and Baliyan Akki have been doing their best to rebound. This was evident on the previous episode, which saw “Mei-chan’s” in-ring return to Ichigaya since losing the titles. On said episode, Best Bros overcame the team of Shin Suzuki and Yuna Mizumori. Their business with “Yunamon” isn’t done yet, however, and Gatoh Move’s “Pineapple Girl” will find herself teaming with a new opponent this time around. Depending on how this contest goes, the Asia Dream tag team title picture could change.

If there’s anyone that should be familiar with the Asia Dream Tag Team Championship, it would be Mizumori. Keep in mind that she is 2x titleholder in her own right, not to mention one-half of the inaugural One of a Kind Tag Team Classic winners alongside TropiKawaild partner SAKI. Meanwhile, the up-and-coming Sayaka has been making more of a name for herself in the world of wrestling, recently competing at World Wonder Ring Stardom’s New Blood 1 event. Participating in this event, even if it resulted in a loss, has only been a benefit to her confidence. If she picks up a win alongside “Yunamon,” expect Sayaka to be in the tag team title discussion as well.