It’s time to crown a new champion – at least in the interim – on this upcoming edition of ChocoPro. Furthermore, this will be done by pitting four of the hungriest competitors in Ichigaya Chocolate Square against one another. With the current champion out of commission for the time being, Gatoh Move Pro Wrestling is without a clear singles titleholder. Though the competitors involved on this show can make a case for themselves walking away the champion, only one will make this a reality. Without any further delay, let’s take a look at what’s to come on ChocoPro #170. 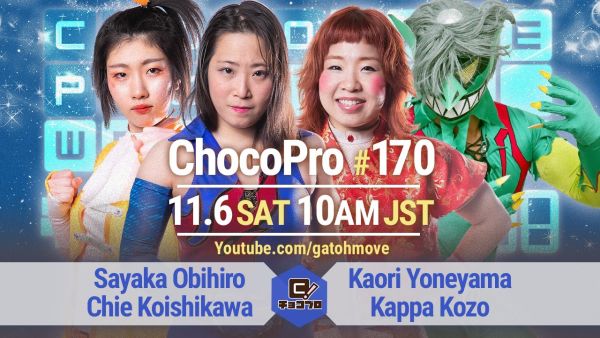 On ChocoPro #170, Sayaka Obihiro makes her return to competition. Though she appeared during the Halloween Battle Royal on the previous episode, it’s here where she will step back into Ichigaya Chocolate Square for a more competitive contest. Her last traditional match took place this past June at a DDT Ganbare Pro event, where she bested Yuna Mizumori, who will be in action later in this show. Now, “The Blue Heart” of Gatoh Move will step back into Ichigaya, teaming with Chie Koishikawa. The girl with “Too Much Energy” had an eventful Halloween, to say the least. After all, she was the one that emerged victorious in the aforementioned battle royal.

Their opponents make for an interesting combination indeed. One of the opponents in question is the wily veteran, Kaori Yoneyama, who last appeared on ChocoPro back on Episode #160 this past September. It was here when she teamed with Tokiko Kirihara in a losing effort against “Yunamon” and Actwres girl’Z star Ayano Irie. Teaming with Yoneyama will be Kappa Kozo, making his second-ever ChocoPro appearance on this episode. Back on Episode #165, the green grappling “Yokai” fell to Masahiro Takanashi, who had Obihiro in his corner. It would seem that Kozo and Obihiro have been involved in a grudge. Expect this to reach greater heights come ChocoPro #170. 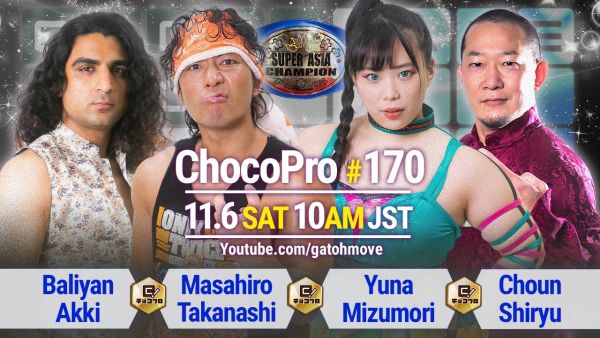 This is among the most unique bouts in the history of ChocoPro. Currently, the Super Asia Championship, Gatoh Move Pro Wrestling’s sole singles title, is held by Minoru Fujita. However, he’s currently out of action due to illness. For the uninitiated, Fujita worked a number of Colega Pro Wrestling shows this past September. It was this series of shows that saw a COVID outbreak and Fujita’s case was so severe that he had to be admitted into the hospital. While he’s been steadily recovering, he hasn’t been cleared to return to action. Thus, it was decided that an interim Super Asia titleholder would be decided in Fujita’s place; once Fujita returns, he will face the interim champion in a match to determine the true titleholder.

This ChocoPro #170 match stems back to a number one contender’s bout that took place on Episode #163. On this episode, Yuna Mizumori battled Chon Shiryu to determine who would be next in line to challenge Fujita. Both competitors gave it all, neither willing to give into the other. Ultimately, they ended up fighting to a 20-minute draw, resulting in a post-match dispute. Not only did Baliyan Akki, one-half of the Asia Dream Tag Team Champions, lay claim to becoming the interim champion, but even Masahiro Takanashi made his own case. Simply put, the competition in ChocoPro is fierce.

As such, on ChocoPro #170, Akki, Takanashi, Mizumori, and Shiryu will face off in a four-way match to determine an interim Super Asia Champion. From there, they will continue to hold said distinction until Fujita is cleared to return to action. As far as the aforementioned four competitors are concerned, any one of them would make for a valiant champion. Could Akki, who once challenged Fujita for the vacant title, realize a goal? Will the winner be “Yunamon,” a 2x Asia Dream Tag Team Champion in her own right? Perhaps we will see a veteran competitor in either Takanashi or Shiryu emerge victorious. Regardless, the stakes couldn’t be any higher heading into this episode.