In the main event of ChocoPro #100 Day 2, Baliyan Akki faced Minoru Fujita for the vacant Super Asia Championship. Given that the title in question had been vacant since 2019, this was a monumental match in Gatoh Move Pro Wrestling history. With Gatoh Move being without a singles champion for almost two years, the stakes couldn’t have been higher. Following a grueling fight between two game competitors, it was Minoru Fujita that ended the match holding the blue championship high. 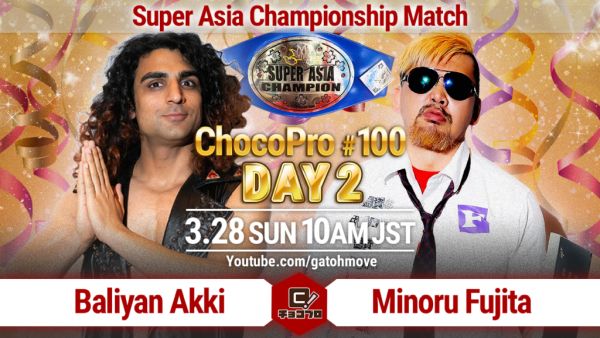 Going into this Super Asia Championship match, there was no clear-cut winner, either. On Day 1 of ChocoPro #100, the veteran duo of Fujita and Emi Sakura battled Asia Dream Tag Team Champions, Akki and Mei Suruga, collectively known as Best Bros. Despite a formidable effort from the veterans, the up-and-coming duo of Akki and Suruga emerged victorious. This shouldn’t take away from Fujita’s own accolades, though. Outside of Gatoh Move, he is a deathmatch specialist, currently holding titles in Tokyo Gurentai, Ryukyu Dragon Pro Wrestling, and Pro Wrestling FREEDOMS. Adding a fourth title to his collection wouldn’t have been unfathomable.

The ChocoPro #100 Day 2 main event between Akki and Fujita began with technical maneuvers, each man trying to ground the other. From there, Fujita took control of his younger opponent, punishing him with strikes. Not one to let his destiny be denied, Akki fought back with strikes of his own. In the early going, it was clear that this Super Asia Championship match was going to be grueling for both men.

Akki focused on the legs, cinching in a bow and arrow lock and attacking the lower half on Fujita. However, Fujita dodged a flying knee strike, fighting back against the Asia Dream Tag Team titleholder. Fujita followed up with a basement running splash against the wall, though Akki stayed in the fight, utilizing his trademark quickness to his advantage. Fujita countered a Namaste Splash from Akki, sending him back into the center of Ichigaya Chocolate Square.

Following an exchange of strikes, Akki attempted the Namaste Splash again, only for Fujita to raise his knees to block the aerial attack. Fujita hit an exploder suplex, though Akki kicked out at two. Once again, Akki fought back, focusing on Fujita’s lower half with a heel hook. Though the pain was grueling, Fujita was able to break the hold.

After hitting each other with strikes, once again, Fujita nailed a spear for another two-count. Fujita followed up with a spinning neckbreaker from the windowsill and a tombstone piledriver. Once more, Akki kicked out, though Fujita would follow up with an ankle lock before transitioning into a stretch. It seemed that Akki was fading. Fujita went for the cover, though despite his weariness, Akki kicked out.

Akki countered a tombstone piledriver attempt from Fujita for a pinfall attempt of his own. Fujita attempted a running strike, but Akki caught him with a dropkick. Akki hit a tombstone piledriver of his own before, finally, landing the Namaste Splash. However, Akki was unable to get the cover due to both men rolling off Ichigaya’s brown mat, thus negating any pinfall attempt.

After another exchange, Akki hit a hurricanrana. Fujita rolled through for another near fall. Fujita countered another hurricanrana attempt before hitting a running double knee strike on Akki. Physically drained, both men exchanged forearm strikes, chops, kicks, and lariats alike. Akki rolled up Fujita afterward, though the deathmatch specialist kicked out. Quick on his feet, Akki grounded Fujita with a dropkick before landing another Namaste Splash. Rolling through, however, Fujita caught Akki with a surprise tombstone piledriver for the final cover. For the first time since 2019, a new Super Asia Champion had been crowned.

Post-match, a physically spent Fujita sat down beside Akki, who was just as drained from the Super Asia Championship main event. The two men exchanged words, and while the match didn’t go the way Akki had anticipated, he showed respect to the new titleholder. Though Akki may not have attained his “destiny” on this show, the future remains bright for the self-proclaimed “Ace” of ChocoPro.

Leading to ChocoPro #100, the Super Asia Championship had been vacant since June 2019. The first, and only, titleholder, was Riho, who won it on September 22, 2017. Riho held the Super Asia Title for a total of 620 days, defending it against up-and-comers such as Mei Suruga and legends such as her mentor, Emi Sakura, and Command Bolshoi. Until now, a second champion was never crowned, as Riho vacated the title once she became a more consistent performer with All Elite Wrestling.