Game Changer Wrestling‘s time in Detroit comes to an end this Thursday with GCW Guilty Conscience. One night prior, the promotion will have teamed with Horror Slam Wrestling for the aptly named event, Horror Slam vs. GCW. As we inch closer and closer to GCW’s The Art of War Games in only a matter of days, one can argue that Guilty Conscience is something of a prelude to the havoc to come. Running through this show’s card, it’s evident that there is a Team MDK vs. 44OH underpinning, albeit in singles encounters as opposed to tag team bouts. Whether you’re planning on watching from home or attending live at Knights Of Columbus in Detroit, Michigan, here’s what to know ahead of Guilty Conscience. 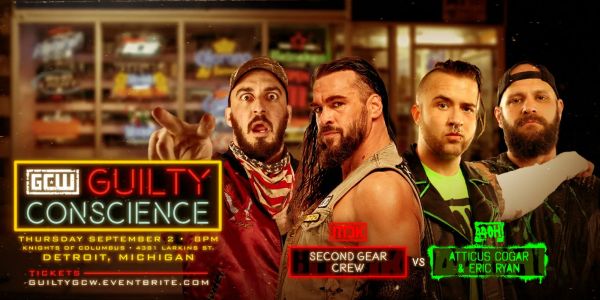 At GCW Guilty Conscience, tag team gold will be on the line. The reigning GCW Tag Team Champions, Matthew Justice and Mance Warner of Second Gear Crew, will be taking on 44OH’s Atticus Cogar and Eric Ryan. Justice and Warner won the titles back in July at Homecoming Part 1, upsetting the chaotic duo of Jimmy Lloyd and G-Raver for the gold. This is only the first GCW Tag Team title reign for the Second Gear Crew duo, and only being a little over one month into this reign, they will be looking to keep their titles by any means necessary. Given their reliance on weapons, foreign objects, and brutal offense, they are more than up for the task. Similar leanings toward hardcore wrestling are shared by their opponents at Guilty Conscience.

Atticus Cogar and Eric Ryan of 44OH will enter this GCW Tag Team Championship match with momentum on their side. Earlier this month, at GCW Off the Rails, their group saw a huge victory. Alongside Rickey Shane Page, Cogar and Ryan defeated the trio of Justice, Warner, and Nick Gage in a six-man tag team deathmatch. Furthermore, both Cogar and Ryan are known for being deathmatch enthusiasts, excelling in the brutal, punishing, and often bloodletting art. Last month, Ryan won IWA Mid-South‘s King of the Deathmatches tournament. Meanwhile, Cogar won IWA MS’s Prince of the Deathmatches tournament in 2020. Needless to say, this tag team title encounter will be anything but clean. 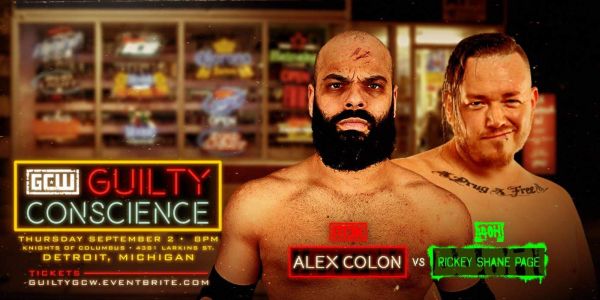 In the first match announced for GCW Guilty Conscience, former GCW Ultraviolent Champion Alex Colon will take on former GCW World Champion, as well as current 44OH leader, Rickey Shane Page. On Night One of GCW Homecoming, Colon put his GCW Ultraviolent title on the line against Drew Parker and his BJW Deathmatch Heavyweight Championship. This was a brutal encounter that, in the eyes of many fans, stole the show on that particular evening. Colon was all heart, though was unable to continue following boundless punishment, allowing Parker to leave New Jersey with two titles. On Night Two, Colon stood alongside Nick Gage, as well as the rest of Team MDK, as 44OH aimed to deliver punishment unto Gage. This led to Gage laying down a challenge: a War Games Match between the two factions on September 4.

Prior to The Art of War Games, Colon will battle Page in one-on-one competition. As stated earlier, Page is a former GCW World Champion, having won the title in December of 2019. Until this past April, Page successfully defended the belt against a variety of opponents. Included among these names were Homicide, AJ Gray, and Joey Janela. What makes this particular singles match at GCW Guilty Conscience interesting is that this is the first time that Colon and Page will face each other since August of last year. In the finals of the Tournament of Survival 5, Colon bested Page to become a then 2x ToS victor. Now, over one year later, can Page avenge this loss against Colon, or will the latter prove, once again, why he’s “The Best of the Best?” 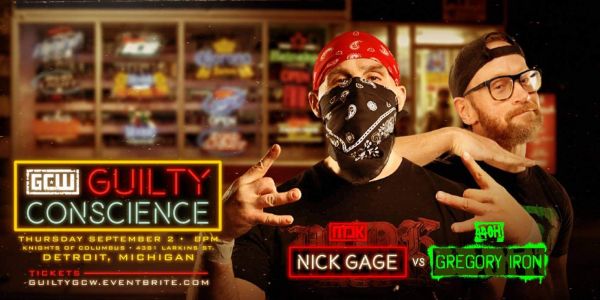 The Hero Vies For the Throne

Since losing the GCW World Championship at Homecoming Night 1, Nick Gage has perhaps never been more focused. This loss to Matt Cardona, which sent the GCW faithful into a frenzy, came at the hands of 44OH. What seemed to be an alliance, as Page stood side by side with “The King of Ultraviolence,” resulted in 44OH’s leader kicking Gage in the groin. This gave Cardona the opportunity to hit Radio Silence, but not before sending multiple light tubes over Gage’s head, claiming the GCW World title as his own. Since then, Gage’s career has taken many turns, even being contracted by MJF to face Chris Jericho on AEW Dynamite mere days after Homecoming. Despite said turns, 44OH remained Gage’s priority. Simply put, he wishes to hurt each member of the nefarious faction. At GCW Guilty Conscience, he has the opportunity to whet his appetite prior to The Art of War Games.

Though he’s part of 44OH, Gregory Iron is considered by many to be an inspiration. Iron has cerebral palsy, which left his right arm with limited range of motion. Despite this, as well as many challenges regarding his upbringing, he was able to enter the world of professional wrestling. His disability only hindered him so much, as “The Handicapped Hero” achieved considerable success, even winning multiple tag team titles alongside former WWE Superstar Zach Gowen, together, they were known as The Handicapped Heroes. By late 2019, however, Iron showed a more villainous side, ultimately joining 44OH and shocking long-time fans in the process. Most of Iron’s success exists in the realm of tag team wrestling. Nonetheless, his high-flying, tenacious style shows that he can hold his own solo. Expect Iron to give “The Man, The King, The God” all he has to offer this Thursday night.

Stay tuned to the Last Word on Pro Wrestling for more on this and other stories from around the world of wrestling, as they develop. You can always count on LWOPW to be on top of the major news in the wrestling world, as well as to provide you with analysis, previews, videos, interviews, and editorials on the wrestling world. GCW Guilty Conscience is set to air Thursday at 8 PM EST on FITE. Tickets are also available via Eventbrite.