Episode six of Heels on Starz starts with a flashback of Tom Spade and Willie Day. Tom is clearly frustrated with the amount of money he’s losing on the DWL despite Willie’s attempts to reassure him about the success of the company.

After the opening scene, the show transitions to Rooster Robbins meeting with rival promoter Charlie Gully at the local diner. Gully makes an offer to Robbins and has a short and sweet conversation with him, reminding him multiple times how underutilized he is in the DWL.

Willie Day and Jack Spade are shown having a conversation about the upcoming show at the fair. Jack has essentially agreed to bring on Bill Hancock for the show. Day has a major problem with this, citing that Hancock’s previous comments are inexcusable. Day said that she might not be around for the show.

Rooster Robbins dropped a very interesting line in the next scene. Robbins was outside of the venue smoking when Jack approached him and asked him to go around back because he’s a “face”. Robbins followed up Jack’s request with “I was thinking about quitting anyways,” which was a nod to both the smoking issue and his issues with DWL itself.

Jack Spade meets with renowned wrestling podcaster Dick (Mick Foley) to record a podcast promoting the upcoming state fair event. Dick asks the hard-hitting questions about his father and Ace, prompting Jack to get frustrated and walk out of the interview angrily. 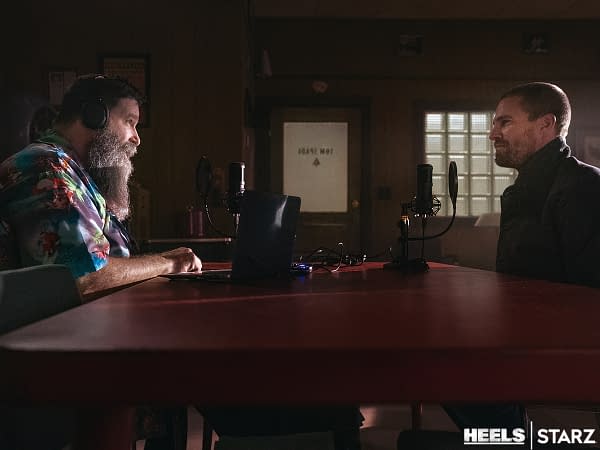 Jim Kitchen had a party/ceremony to celebrate the baptism of his newborn child. The majority of Duffy attends, but a notable instance happens very early. Ace seems to be in a forgiving mood after the ceremony and apologizes to Bobby Pin for this leg injury. Later that night, Ace apologizes to Crystal as well.

As Willie Day is closing up the “Dome” for the night, Bill Hancock appears in her office. Hancock gets personal and after dancing around his point for a minute, he apologizes to Day. Hancock reiterates the fact that what he said was wrong and blames it on the previous affection he used to hold for Day decades ago. Their whole backstory is unraveled and it’s strikingly similar to the current Ace/Crystal/Bobby situation.

After the day comes to a close, Jack sits down with his wife Stacy for a talk. Stacy is practically begging for Jack to care about her and his family at this point. She strikes up a memorable quote of “You can’t burn both ends of your candle all the time.” Jack still seems to shrug off Stacy’s wishes and doesn’t understand the mental toll he’s putting on his family.

The show quickly cuts to Rooster Robbins in his car. Robbins is shown calling Charlie Gully and telling him that he’s interested in joining the Florida Wrestling Dystopia.

The episode ends with Ace putting on some old VHS tapes of his father. Ace continues to divulge in self-doubt and regret before shedding a few tears as the tapes have his father dreaming of some big goals for Ace, including the NFL.

It’s been teased for the entire show that somebody was going to make the “jump” to Charlie Gully’s Florida Wrestling Dystopia, and I’m glad that Rooster Robbins was the one. Robbins has been portrayed very well as an underutilized guy in DWL and although Charlie Gully is probably going to treat him even worse, I’m glad he had the guts to make the jump.

The comparisons between the Day/Hancock/Tom and the Crystal/Ace/Bobby dynamics are absolutely fascinating and are something that I didn’t realize until this episode came around.

This episode’s general theme seemed to be about becoming a new person and shedding the “old skin” of your previous self. Both Bill Hancock and Ace Spade seem to be changing for the better (I personally doubt it), while Jack continues to overload himself with DWL business and other projects that don’t include his family.

I assume that the next episode will be focused around the state fair show and while they’re expected to sell 10,000 tickets, I don’t see it happening – even with Bill Hancock in the main event.