This Sunday, Game Changer Wrestling has a single goal in mind: to make Chicago gayer. To this end, they will hold their semiregular event that shines a light on LGBTQ wrestlers on the independent circuit. Enter EFFY’s Big Gay Brunch Chicago, set to take place this Sunday at Grand Sports Arena in Chicago, Illinois. The original event took place in October of 2020; since then, GCW has held subsequent events under the EFFY’s Big Gay Brunch banner, showcasing independent wrestling talent of various backgrounds, ethnicities, and beliefs. Here’s what to know heading into the show this Sunday. 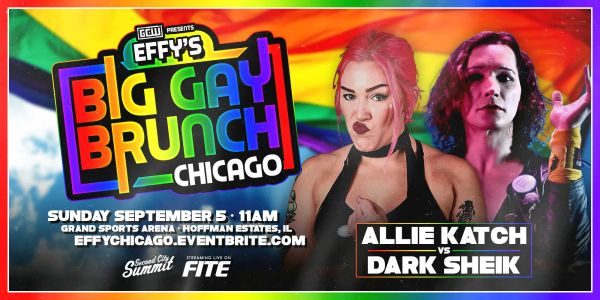 The first match announced for EFFY’s Big Gay Brunch Chicago will pit one-half of BUSSY, Allie Katch, against “The Most High Priestess,” Dark Sheik. To say that this is a match of GCW favorites would be an understatement. In their own ways, they have won over the company’s most passionate fans, not only due to their personalities but the ways in which they sacrificed their bodies for the art of wrestling. Allie Katch, despite her transformation from the more comedic Allie Kat, remains a serious competitor that isn’t shy about taking things to the extreme. Meanwhile, as an influential independent wrestler on the West Coast, Sheik has developed an incredible following, even among fans that are quick to offer her a smoke following a match.

It may surprise new GCW fans to know that this is a first-time encounter. In other words, EFFY’s Big Gay Brunch Chicago marks the first singles encounter between Allie Katch and Dark Sheik. This isn’t to say that Sheik hasn’t had encounters with BUSSY. Think back to GCW Draft Day in May; in the third-to-final match of the evening, EFFY bested “The Most High Priestess” in a competitive encounter. Come this Sunday, Sheik will have to modify her strategy if she intends to come out victorious. Katch’s blend of catch wrestling, hence the name, and ultraviolent tendencies make her a formidable opponent. Stay tuned as Allie Katch and Dark Sheik wrestle each other for the first time. 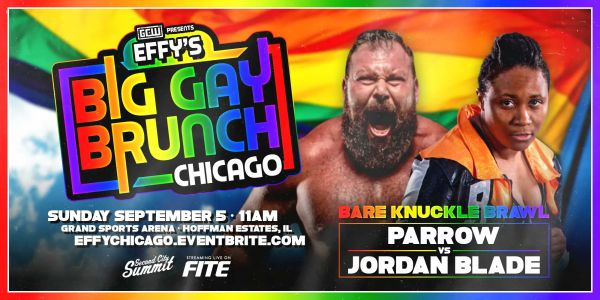 In what may be the most hard-hitting match of GCW EFFY’s Big Gay Brunch Chicago, Parrow will take on Jordan Blade in a Bare Knuckle Brawl. Given the competitors involved, this particular match stipulation should come as no surprise. Parrow is primarily a tag team wrestler, often paired off with Odinson as the duo called The End. Together, they’ve been tag team titleholders in Full Impact Pro and New South Pro Wrestling. They can also be seen in the National Wrestling Alliance, either inching closer toward the NWA World Tag Team Championship or exercising their combined authority over unsuspecting opponents. When it comes time to stand alone, however, the New York native in Parrow doesn’t buckle. This match marks his fourth Big Gay Brunch appearance, as well as his third appearance for GCW this year. In 2021, Parrow remains undefeated in the promotion.

Going head-to-head with Parrow will be “The Daddy of the District,” Jordan Blade. From Richmond, Virginia, “The Anklebreaker” made her professional wrestling debut in 2017 after setting aside Ultimate Frisbee as an athletic endeavor. Since then, Blade has achieved considerable success; most recently, in June, she became the first Super Middleweight Champion for Paradigm Pro Wrestling. As her moniker would suggest, she utilizes the Ankle Lock as her signature maneuver, though she has no shortage of ways to hurt opponents. This mindset makes her the perfect participant for a Bare Knuckle Brawl and, by extension, the right opponent for Parrow. When these two slug it out this Sunday, expect them to take one another to the limit. 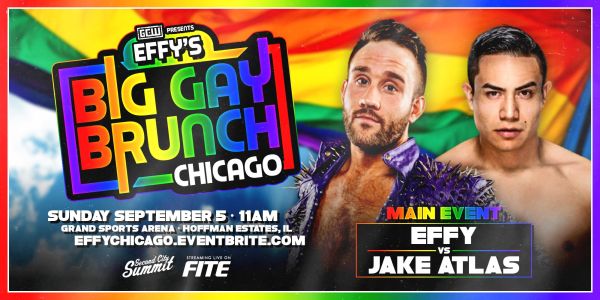 In one of the biggest matches set for EFFY’s Big Gay Brunch Chicago, Jake Atlas makes his return to Game Changer Wrestling. His last appearance for the promotion took place in January of 2020, where he faced Tony Deppen in a losing effort at I Can’t Feel My Face. Shortly after, the Santino Bros. Wrestling Academy graduate became a full-time performer for World Wrestling Entertainment, wrestling primarily on the NXT brand. Though he was in contention for the NXT Cruiserweight Championship, Atlas never claimed the title. This past August, he was among the 13 names released from WWE. Wrestling fans didn’t have to wait long to learn where Atlas would turn up next, however. Not only does this mark Atlas’s return to the promotion but his first-ever match at an EFFY-named event. What a way to make a return, too, as he will take on the namesake of the event in question.

It’s safe to assume that EFFY’s time in GCW, as of late, has been eventful. First, he has found himself in the thick of the war between the MDK Gang and 44OH, which led to The Art of War Games the night prior to this event. Second, EFFY has been undefeated in singles competition, in GCW, since late July. His victories over Frontman Jah, Ricky Morton, and Disco Inferno are a collective testament to this. As one would expect from “The EFFY Experience,” he will bring the energy longtime GCW viewers have come to associate with his shows. Heading into EFFY’s Big Gay Brunch Chicago, however, he must be at the top of his game. Atlas has returned to not only put on a great performance but more importantly, win. Atlas already did so in November of 2019 – think back to Bar Wrestling‘s November Spawned a Monster event – so a victory will be that much more important for EFFY.

Stay tuned to the Last Word on Pro Wrestling for more on this and other stories from around the world of wrestling, as they develop. You can always count on LWOPW to be on top of the major news in the wrestling world, as well as to provide you with analysis, previews, videos, interviews, and editorials on the wrestling world. GCW EFFY’s Big Gay Brunch Chicago is set to air Sunday at 12 PM EST on FITE. Tickets are also available via Eventbrite.