Gatoh Move Pro Wrestling will close out this upcoming weekend with ChocoPro #151, taking place in the now dry venue of Ichigaya Chocolate Square. Following Gatoh Move’s “Summer Vacation Special” 2 episodes prior, the crew has been hard at work while Lulu Pencil and Emi Sakura have been away in America. Thus far, the chaotic nature that fans have come to expect of these shows has been maintained, if not bolstered due to the absence of Pencil Army‘s leader and Gatoh Move’s founder. It’s safe to say that said chaos will be on display in episode #151. Here’s what to expect. 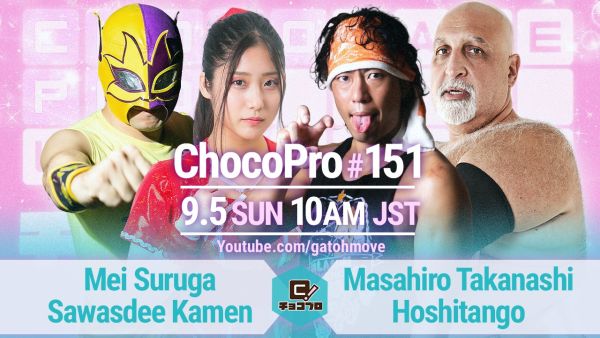 Mei Suruga and Sawasdee Kamen vs. Masahiro Takanashi and Hoshitango

Opening ChocoPro #151, in tag team competition, will be Gatoh Move icons Mei Suruga and Sawasdee Kamen taking on the tandem of Masahiro Takanashi and Hoshitango. On the previous episode, Suruga teamed with Baliyan Akki, the Asia Dream Tag Team Champions taking on the makeshift duo of Yuna Mizumori and Chie Koishikawa; the latter duo will be in action on this episode’s main event. Joining “Mei-chan” is Gatoh Move’s masked mascot himself. Kamen last participated in episode #146, teaming with PURE-J star AKARI in a losing effort against the Asia Dream Tag Team titleholders. Kamen will be looking to pick up a win, which will be that much more of a possibility with a champion by his side.

Their challengers won’t make a victory easy, however. The man that “Only Lives Twice,” Takanashi, will be working alongside the returning Hoshitango. A former sumo wrestler, the Argentina-born athlete entered the world of professional wrestling with legitimacy to his name. Simply put, he is a monster. He made his ChocoPro debut on episode #146, teaming with “Six Pack” Tokiko Kirihara in a losing effort against Takanashi and Mizumori. Now, the DDT Pro regular will be teaming with his former opponent in an effort to pick up a victory. On paper, this is a bout where agility and power are in opposition. 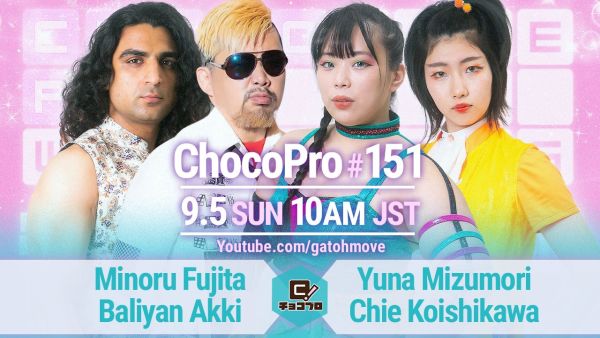 The main event of ChocoPro #151 is nothing short of star-studded. On one side of Ichigaya Chocolate Square will stand Baliyan Akki, the India-born half of Best Bros, and the current Super Asia Champion, Minoru Fujita. Though the two fought for the vacant title on ChocoPro #100 Day 2, with Fujita ultimately winning the title, the two have since developed a mutual respect. From there, they continued their individual efforts. While Akki, alongside Suruga, held down the tag team scene in Gatoh Move, Fujita has done everything from becoming a loyal Pencil Army member to wrestling for such organizations as Colega Pro Wrestling and Pro Wrestling FREEDOMS. Now, on ChocoPro #151, they join forces to battle a team wrestling their second straight match in a weekend.

ChocoPro #150 saw Yuna Mizumori and Chie Koishikawa take on Best Bros in the main event. Given the credibility that the Asia Dream Tag Team Champions have developed since winning the purple titles back in December, it says something about the trust Mizumori and Koishikawa possess to have wrestled in such a match. It’s also worth noting just how similar they are in personalities despite their different wrestling styles. Both Mizumori, “The Tropical Fairy,” and “Too Much Energy” Koishikawa are known for being energetic, charismatic performers. However, whereas “Yunamon” emphasizes strength and power-based offense, Koishikawa is quick on her feet and fast with her strikes. This will be a tag team main event not to miss.