With summertime reaching its conclusion, it’s important to remember that it’s never too late to celebrate. Evidently, Gatoh Move Pro Wrestling feels the same, as it will host ChocoPro #149, also known as its “Summer Vacation Special.” There is plenty to see on this show, including the return of a previous star, the debut of another, and various match types that are only possible in the realm of Gatoh Move. Don’t pack up your summer attire just yet; there is still a bit more to do before we head into the fall season. Here is what to know heading into ChocoPro #149. 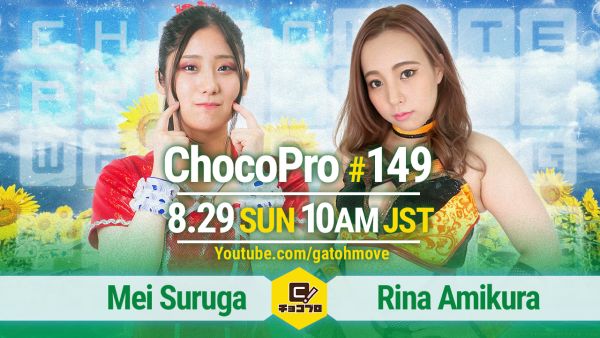 In singles competition will be Mei Suruga, Gatoh Move’s “Apple Devil,” and the harmonious Actwres girl’Z star, Rina Amikura. Representing Color’s, Amikura is known for both her powerhouse offense and inclination to sing during matches. These qualities were on full display during her initial ChocoPro appearances in the spring and early summer. Since then, “Amiin” has remained largely in AWG, even vying for the Color’s Championship in the company. Now, to help Gatoh Move wrap up the summer the only way the company knows how, she will battle Suruga. As one-half of the Asia Dream Tag Team Champions, not to mention one of the top names on ChocoPro, “Mei-chan” will be nothing short of a challenge to overcome.

This will be no ordinary singles match, however, as it’s billed as a Watermelon Splitting Special Rule Match. Whether it’s the apple motif of Suruga, the pineapple enthusiasm of Yuna Mizumori – we will get to her shortly – or even the affinity for oranges that Amikura shares, fruit isn’t foreign to Gatoh Move. Whether this particular match stipulation should be taken literally remains to be seen. With that said, it’s safe to assume that it will be a unique take on the action that longtime ChocoPro viewers have become accustomed to. Amikura’s last ChocoPro appearance, which was episode #126 this past June, saw her best Sayaka. Can “Amiin” pick up another win, in her return match, against the formidable “Apple Girl?” 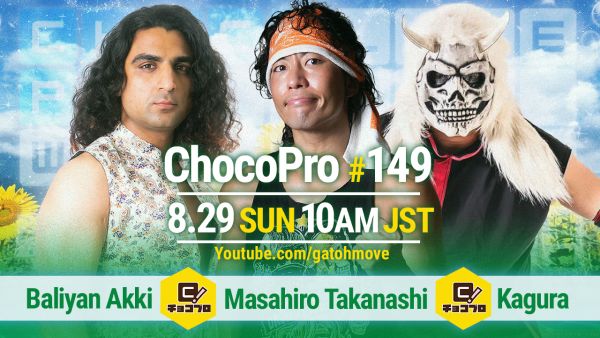 In another unique match, one being billed as a Summer in India Special Rule Match, India’s own Baliyan Akki will find himself facing off against a familiar foe in Masahiro Takanashi. Born in Uttar Pradesh, India, Akki found himself traveling the world to become the best professional wrestler he could be. From his home country to Thailand to Japan, Akki’s journey has been nothing short of extraordinary. He has faced Takanashi, one of ChocoPro’s biggest supporters behind the scenes, on multiple occasions. In fact, their most recent encounter took place 5 episodes ago, when Akki and Tokiko Kirihara faced Takanashi and Antonio Honda in a losing effort. On ChocoPro #149, however, they will only have themselves to rely on.

Unfamiliar to them, in ChocoPro, is the wrestler known simply as Kagura. Donning an oni-style mask, Kagura is a professional wrestling veteran with nearly a decade and a half’s worth of experience under his belt. Those familiar with the Japanese wrestling promotion known as 666, which has its roots in deathmatch competition, will know who this competitor is. Kagura has also been prevalent in Guts World Prowrestling, where is a former Tag Team and Six-Man Tag Team Champion. Additionally, from 2012 to 2019, he made sporadic Gatoh Move appearances, his last being in December of the latter year. Can Kagura make his ChocoPro debut a win in a match type shrouded in mystery?

Capping off ChocoPro #149 is a Summer Vacation Battle Royale featuring 7 competitors. Looking at the card, it’s plain to see that a few competitors – namely Amikura, Suruga, and Akki – will be pulling double duty. In theory, this would take them out of the running, as they will compete in undoubtedly competitive matches. Nonetheless, they still have as much chance of winning the Summer Vacation Battle Royale as the remaining 4 competitors. Yuna Mizumori, who was mentioned earlier, was brought into this match as a late addition. This makes the landscape of the match that much busier. Whoever comes out of this contest victorious can rest assured that their win was well earned.

It’s important to discuss the rules regarding a battle royal as they relate to Ichigaya Chocolate Square, the primary venue of Gatoh Move. Simply put, wrestlers compete not in a traditional wrestling ring but on a brown mat. This means that standard over-the-top-rope elimination rules needn’t apply. Instead, an elimination occurs when a competitor is pinned or made to submit. From there, the number of competitors whittles down until there is one wrestler standing. As Gatoh Move wraps up the summer and heads into autumn, only one will emerge the victor of the Summer Vacation Battle Royale on ChocoPro #149.