GCW Homecoming Part 2 ended with what was considered one of the most shocking announcements of the year. For the show originally GCW The Art of War, Nick Gage and his allies issued a first-time challenge to the 44OH: a War Games Match at GCW The Art of War Games. To say that this is an important show would be an understatement. The focus isn’t on championships; rather, all eyes will be put on two 5-man teams looking to administer punishment and establish authority. It’s going to be a chaotic night in Chicago this coming Saturday. Here’s what to know heading into the event. 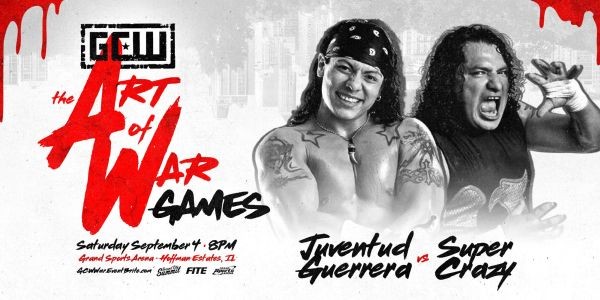 In one of the most interesting bouts at GCW The Art of War Games, two lucha libre legends will go toe-to-toe. Juventud Guerrera has been a rather prominent name in wrestling as of late. Last month, he debuted on AEW Dynamite to take on Chris Jericho in what can best be described as a World Championship Wrestling throwback encounter. “The Juice” was also part of the previous night’s event co-hosted by GCW and Black Label Pro, 3 Cups Stuffed. Simply put, Guerrera has been putting in the work. As the 3x WCW Cruiserweight Champion continues to wrestle into the future, it’s become evident that he isn’t shy to revisit the past. Enter one of his long-time opponents and partners, Super Crazy.

Not unlike “Juvi,” Super Crazy has been making his rounds on the independent scene as of late. From Coastal Championship Wrestling to IWA Mid-South, many indie fans have bore witness to “The Extreme Luchadore.” Crazy has been especially successful in IWA Puerto Rico, holding 14 separate championships during his time in said promotion. Most longtime wrestling fans will know of Crazy and Guerrera during their time as The Mexicools, a three-man unit that also consists of Pscisosis. In fact, the trio has been wrestling together as recently as February of 2020. At The Art of War Games, however, allies will engage in singles competition. These are two legends that are determined to show they can still go the distance. 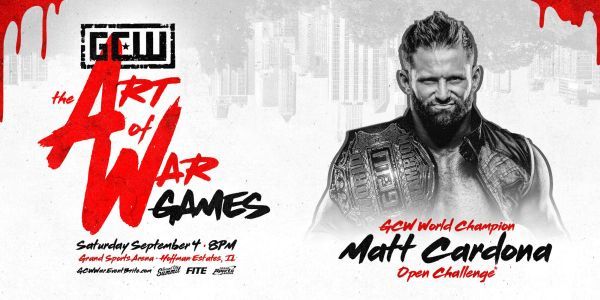 A major Game Changer Wrestling show wouldn’t be complete with the GCW World Champion in attendance. It would seem that Matt Cardona, even before winning the title at GCW Homecoming, has been on a mission to antagonize the company’s avid fans. From referring to said fans as the “GCW Universe” to threatening to have the title renamed to the “GCW Universal Championship,” the “Always Ready” Long Islander has known which buttons to push.

At The Art of War Games, he will defend his title for only the second time. His first title defense came at GCW Off the Rails last month, answering a challenge from Sam Stackhouse. Dressed coincidentally like Vince McMahon during his ECW World Championship reign, complete with black attire and a matching do-rag, Cardona made short work of the rotund Stackhouse. It’s safe to say that the champion’s second defense will not take place on friendly territory, either.

At GCW The Art of War Games, Matt Cardona will issue an open challenge for the GCW World title. Keep in mind that this can be answered by anyone, even those that aren’t regular competitors for the promotion. It’s unlikely that any of the competitors taking part in this event’s War Games match will answer, as they will have other priorities in mind. Regardless, Cardona should expect the unexpected when it comes to the chaotic world of Game Changer Wrestling. If he’s ill-prepared, Cardona’s reign as GCW World Champion may end before he expects. Who will be the one to step forward and potentially silence the brash titleholder once and for all? 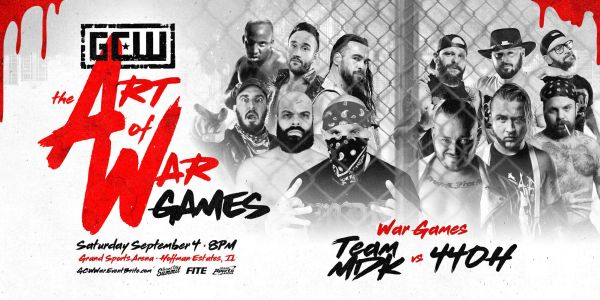 Time to Go to War

Nick Gage was on the receiving end of a devastating loss at GCW Homecoming Part 1. On this night, he defended the GCW World Championship against the vilified – at least from the GCW diehard fans in attendance – Matt Cardona. The match reached its apex when the 44OH interfered, attacking Gage. The group’s leader, Rickey Shane Page, seemingly came down on Gage’s behalf. Ultimately, Gage blindsided “The King” with a kick to the groin. This allowed Cardona to hit Radio Silence, becoming the new GCW World Champion soon afterward. Just like that, Gage’s status as world champion came to an end. The next night, at Homecoming Part 2, Gage’s focus was not so much on the title but rather the group that cost him the gold.

Just as Gage seemed to be outnumbered, he was joined by a number of allies. Alex Colon, the former GCW Ultraviolent Champion, came to Gage’s defense. They were soon joined by Second Gear Crew members AJ Gray, EFFY, and the GCW Tag Team Champions, Matthew Justice and Mance Warner. As the 44OH retreated, Gage took to the mic, throwing down a challenge. At Chicago, in Grand Sports Arena, the two unions would face off under the more dangerous of circumstances. For the first time, in the history of GCW, the rivaling groups would do battle in a War Games Match.

The War Games Match is a concept that dates back to 1987. Wrestling historians will often associate the match type in question with the National Wrestling Alliance and, soon thereafter, World Championship Wrestling. The final War Games Match took place in 2000 and wouldn’t be revisited until 2017 when it was given new life under the WWE NXT banner. Heading into the show this Saturday, one must wonder how will Game Changer Wrestling make this stipulation their own. Consider the promotion’s reputation for taking things to the extreme; it’s safe to say that there will be a different take on his historic stipulation.

GCW The Art of War Games will take place in Chicago, Illinois on September 4, 2021.

Stay tuned to the Last Word on Pro Wrestling for more on this and other stories from around the world of wrestling, as they develop. You can always count on LWOPW to be on top of the major news in the wrestling world, as well as to provide you with analysis, previews, videos, interviews, and editorials on the wrestling world. GCW The Art of War Games is set to air Saturday at 9 PM EST on FITE. Tickets are also available via Eventbrite.