By the time that Gatoh Move Pro Wrestling is set to air ChocoPro #150, Ichigaya Chocolate Square has completely dried off. Last time, Gatoh Move hold their “Summer Vacation Special” edition of their long-running YouTube wrestling show. In the main event, 7 competitors took part in a themed battle royal. This resulted in everything from water guns being fired to a kiddie pool causing temporary flooding in the venue. One can only imagine the thoughts going through the mind of Emi Sakura, as she watched the hijinks from her new home in America. Now that the summer festivities have wrapped up, it’s time to head into the fall season with a new episode of ChocoPro. Let’s run down the card.

Kicking off ChocoPro #150 will be a singles contest between Gatoh Move’s “Beautiful Cosplayer,” Sayaka, and the booze-loving wrestler that “Only Lives Twice,” Masahiro Takanashi. Sayaka was absent from the previous episode of ChocoPro, and while she may have missed out on the aforementioned summer festivities, she is set to bring the heat. Ever since the first round matches of the One of a Kind Tag League, in which she teamed with Super Asia Champion Minoru Fujita, Sayaka has struggled to pick up a victory. Whether in singles or tag team competition, the cosplaying striker has found it difficult to have her arm raised by the closing bell. She intends to change things, in her favor, with a win over Takanashi.

Unlike Sayaka, Takanashi was part of the “Summer Vacation Special” edition of ChocoPro. To be more specific, he competed in the three-way Summer in India Match. To say that this was a unique encounter would be an understatement, as it involved Baliyan Akki closing the windows and shutting off the air conditioning. This resulted in Ichigaya Chocolate Square’s temperature quickly rising; the only way to win was to retrieve the AC remote and turn the air back on. In surprising fashion, it was Chie Koishikawa, who served as the referee for the match, finally putting an end to the match. While this was an often comedic match, Takanashi’s upcoming bout with Sayaka will require him to put forth a more serious effort. 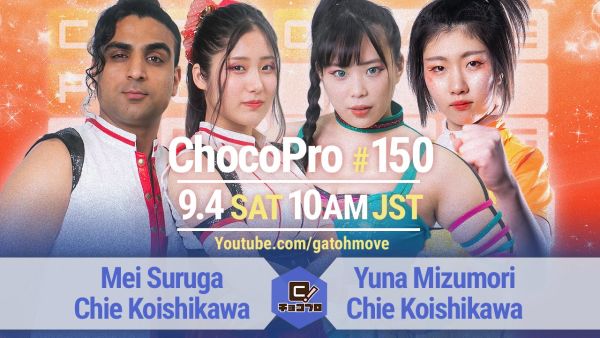 To close out ChocoPro #150, Asia Dream Tag Team Champions Best Bros will take on the combined efforts of Yuna Mizumori and Chie Koishikawa. Both Mei Suruga and Baliyan Akki pulled double duty on the previous episode of ChocoPro. Both competitors were involved in the main event battle royal. Prior to this, however, Suruga took on Actwres girl’Z star Rina Amikura in a Watermelon Splitting Match; the goal of said match was to keep the watermelon intact and have the other wrestler break it. Utilizing Amikura’s own head against her, Suruga caused her opponent to break the melon, winning the match. Meanwhile, Akki took part in the previously mentioned Summer in India Match, which featured Takanashi and Kagura from the 666 promotion. When they work together, no matter their quirks and internal competitive nature, few teams have been able to stack up to Best Bros.

Standing across Ichigaya Chocolate Square from the champions will be Yuna Mizumori and Chie Koishikawa. Though they feature energetic personalities, where they differ is their wrestling styles. While Mizumori relies largely on power-based moves, Koishikawa is speedier, implementing strikes and submission maneuvers as well. This isn’t the first time that “The Pineapple Girl” and “Too Much Energy” teamed up, either. Think back to ChocoPro #126, which marked the show’s season 7 finale. In the main event, “Yunamon” and “Chiezo” fell in a losing effort to, ironically enough, Best Bros. Simply put, this is a rematch with high stakes. Can Mizumori and Koishikawa avenge their loss from nearly 2 months ago? Tune into ChocoPro #150 to find out.