In the past couple of months, it has been confirmed a couple of times by The Young Bucks and All Elite Wrestling CEO Tony Khan that it is a matter of when and not if a set of championship belts would be coming to AEW specifically for six-man tag team matches. This should come as no surprise to fans as AEW has had a stacked roster of factions for a while now. Couple that with a constantly growing roster and these titles will surely be the catalyst for some of the best wrestling we’ll see. With this in mind, it seems like the perfect time to introduce the belts has come as AEW’s return to the road gets closer and closer. We can only assume we’ll be seeing the belts sooner rather than later.  In this article, we will present a few of what we consider to be some of the best options to be the inaugural AEW Trios Champions. 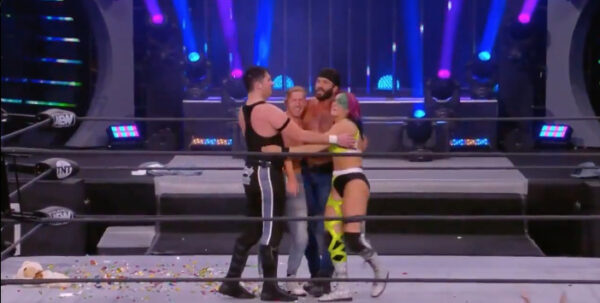 Like we mentioned before, AEW will be coming back to live audiences across the country in only a matter of weeks. Then thinking of those first crowds outside of Daily’s Place, it is impossible to not imagine the incredibly loud reaction any member of Best Friends would get for winning the titles.

What makes this team such a great contender to be the first-ever champs is how beloved all three men are. So far, none of them have been able to win a championship in AEW mainly due to the focus being on Kenny Omega and The Young Bucks as champions.

Best Friends being the inaugural champions would set the tone for exactly the type of action and stars we can expect to be featured in the division. With their mix of fast-paced action, star quality, and babyface charisma there are few better options to hold the titles first.

Despite growing numbers, Matt Hardy‘s faction lost some momentum and hasn’t been able to pick it back up pretty much since Private Party lost their chance at the IMPACT Tag Team titles at No Surrender.

Making this group inaugural trios champs might be the perfect opportunity to put some heat back on Hardy and his entire faction. This move would also solidify Private Party as one of the top teams in AEW as proper heels.

We understand this trio is probably a dark horse, but Private Party’s potential has gone untapped ever since they made their debut. For a while, it looked like Matt Hardy was going to be the one to get them to the titles, so this is a new opportunity for Hardy to make them champions while getting some gold of his own in the process.

One crucial factor for stables with more than three members to win the titles would be to avoid using the Freebird Rule.  In this case, Matt Hardy teaming with The Butcher and The Blade or Angelico and Jack Evans would not have the same effect as him tagging with Private Party. 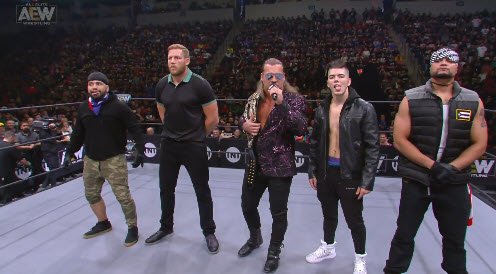 Back to one of the top contenders to be inaugural trios champions, The Inner Circle has been a staple of AEW television ever since the inception of AEW Dynamite. Following their recent victory at the Stadium Stampede match, they’re swimming in momentum. Becoming the inaugural AEW Trios Champions could be the perfect way to keep the group both strong and fresh at the same time.

Now, this time there might be a little controversy over the members of the group we’ve selected as quite a few people would probably prefer Chris Jericho or even Sammy Guevara over Jake Hager, but hear us out!

We picked Hager mainly because of the excellent pairing he makes with Santana & Ortiz when put together. The mix of high-risk aerial moves of the former LAX pair and the sheer powerhouse brutality the former Jack Swagger brings to the table makes this the most complete and diverse trio within The Inner Circle.

Another point in favor of making Hager and Santana & Ortiz the first champions is that we haven’t seen them together in a six-man tag match since March of last year. They’re still a fresh act on TV and fans haven’t seen what they’re capable of as a three-man group.

When discussing what the previous teams on the list had, we mentioned the need to feel fresh in the eyes of fans, the fan reaction the title win would generate, and the quality of matches the team could put together. We’re fairly confident this combination of The Pinnacle members fill that criteria rather easily.

MJF and FTR are some of the best heel acts individually and in the tag team division respectively. Combining the two has championship material written all over it, specifically as inaugural AEW Trios Champions.

While we mentioned Best Friends setting the tone for the trios division, we believe this team could set an even better tone by immediately making the belts a prize desired by the very top bad guys in the industry. Not only that, but it also makes the titles the coveted reward for an eventual babyface team to dethrone the bad guys.

Finally, our main selling point on the MJF-FTR team is the incredible quality of matches these three would be able to produce with virtually any team in the company. All three have an undeniable ability to adapt to any opponent’s style and deliver a great wrestling match in the process.