Maxwell Jacob Friedman, more popularly known by his initials MJF, is probably the fastest rising star the professional wrestling industry has seen in a long time. Some may say he is brash, arrogant, cocky and, whatever else. But, without a shadow of a doubt – and he would tell you this himself – he is in fact “The Salt of the Earth” as far as professional wrestling goes. According to him, he is better than everyone else and they should know it. At only 25 years of age, and six short years into the business, MJF has done more than most in his short time in the business. It’s fair to say that he has brought back the essence of what it is to be a phenomenal character and an effective one at that in wrestling.

He lives the gimmick most would say. But to him, he’s nothing but his true self. One of the most intriguing and polarizing stars in all of pro wrestling as we speak. This man is born for greatness in this industry. So let’s take a look at his not-so-modest but outright meteoric rise into prominence. Let’s not be “nerds” and dive right in.

MJF recalled that his earliest memory of watching wrestling was seeing “The Big Red Machine” Kane on a random SmackDown episode. He would turn to his uncle who was a fan himself to find out what he was watching. His uncle would just exclaim it was wrestling. From there on out, young Maxwell was hooked. He wanted nothing more but to consume the product as much as he can. As soon as he was done watching that SmackDown episode, he would run to his dad and ask if he could rent out pro wrestling shows from Hollywood Video.

He would proceed to rent out a show that, according to him had a scary man on it, which intrigued him. That scary man was none other than “The Phenom” himself, the legendary Undertaker. The first match he ever saw in full was the Hell In A Cell Match at the 1998 King of the Ring between Mankind and “The Deadman.” It was his introduction to wrestling and for a kid, it was quite the first match.

MJF would go down a Youtube rabbit hole to watch the WWE product of the late ’90s to early 2000s.

In that search, he stumbled upon a man wearing a kilt. This man was running his mouth and he remembered that everybody hated him. Friedman himself hated this man but was intrigued as well so he kept on watching. The man turned out to be “Hot Rod” himself, the late great Roddy Piper. MJF was enamored with Piper and he became MJF’s idol and the man who he would emulate everything after as far as wrestling was concerned.

Upon discovering Roddy Piper, young Maxwell would dive even deeper into old-school wrestling and fell in love with it. MJF stated that from the year 1992 downward, he watched older generations of wrestling. He would watch promotions such as World Class Championship Wrestling, Smoky Mountain Wrestling, Mid-South Wrestling, and, Georgia Championship Wrestling to name a few. There he discovered the likes of Ric Flair, Tully Blanchard, and “Hot Stuff” Eddie Gilbert which he patterned himself after citing as inspirations and idols on his way to becoming a professional wrestler. MJF loved the old-school style because it produced such memorable larger-than-life icons. He loved the glitz and glamour of it all and gravitated towards a more traditional approach in his path to the wrestling profession.

As his fascination and eagerness grew, he would attend the 2002 edition of Survivor Series in Madison Square Garden. There he witnessed the first-ever Elimination Chamber Match seeing “The Heartbreak Kid” Shawn Michaels triumphant in capturing the World Heavyweight Championship being adored by the thousands in attendance. This was the exact moment he wanted to do this for life; he wanted to be a professional wrestler.

Maxwell would stray away from the path early on, as he was a dominant football player back in his day. He would be recruited by Ivy League schools offering a full ride to play for their football program. MJF’s heart was set on only one thing: to become the greatest professional wrestler ever to walk Earth. After a week at Hartwick College, he quit and started to execute on the way to his lifelong dream. Starting his training at the age of 19, MJF would attend the Create A Pro Wrestling Academy in Hicksville, New York in the year 2015. It was there he learned the tools of the trade from Curt Hawkins and Pat Buck.

Professional wrestling came easy to him, as he stated. MJF was ahead of everybody else even though he just started. Three months into his training, he would have his first match. This was a tag team match with Bear Bronson against two recruits who, shortly thereafter, quit wrestling training altogether. MJF was riding a high unlikely any other and nothing could ever stop him from reaching the peak of the mountain. Fun fact: MJF even sent in a tryout video for WWE’s Tough Enough competition. 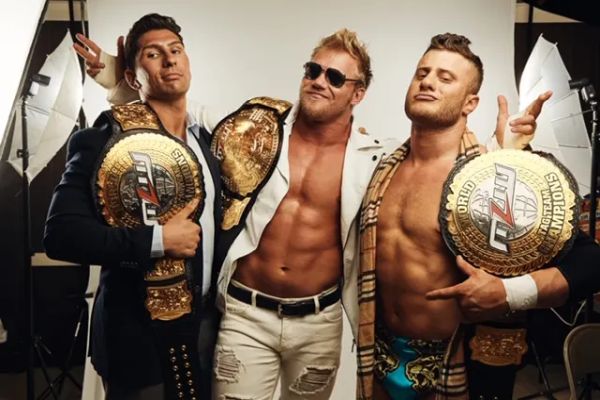 Supernova in the Indies

In his debut year, MJF would compete for Independent promotions such as Five Borough Wrestling and Combat Zone Wrestling. It was in CZW where he would pick up steam in his young career. Two years into working for the promotion, MJF won the CZW Wired Championship, defeating Johnny Yuma. He would be successful in defending his crown multiple times, defeating the likes of Trevor Lee, John Silver, and, Ace Romero to mention a few. Unfortunately, months later, he would lose the title to arch-rival Joey Janela. MJF would soon regain the prize, ushering in his second reign with the CZW Wired title.

MJF was on a hot streak up to this point. He won a 27-man battle royal to earn a shot at the CZW World Championship at CZW Best of the Best 17. On that night, he vacatde the CZW Wired Championship. His crowning achievement, up to that point, came later in the show; he won the CZW World Heavyweight Championship for the first and only time, defeating Rickey Shane Page.

Major League Wrestling soon came calling and, in grand MJF fashion, it wasn’t long before he was winning titles. He became the first-ever MLW World Middleweight Champion. After almost five months of reigning supreme with the championship, he would have to vacate it in December due to suffering a fractured elbow, causing him to miss his scheduled title defense. Upon returning from injury, he challenged Teddy Hart for the MLW World Middleweight Championship but came up short; MJF would attack Hart after the match. Joining him is this assault was Richard Holliday. Thus, The Dynasty was born. Alexander Hammerstone would round out the trio. MJF and Holliday would solidify their spot in MLW history by winning the MLW World Tag Team Championships. MLW wouldn’t have MJF for long, however. He was about to embark on the opportunity of a lifetime shortly thereafter departing MLW in 2020.

AEW and the Future of MJF

After the events of All In, in which MJF was finally in the biggest spotlight possible, All Elite Wrestling would jump on the opportunity to sign a future great. Maxwell Jacob Friedman debuted at the inaugural Double or Nothing in the Casino Battle Royale. It was here he stood toe to toe with “Hangman” Adam Page as the last two men in the contest. Unfortunately, “The Salt of the Earth” would not be victorious in that match. However, was only the beginning of the legend of MJF in AEW.

MJF would go on a massive undefeated streak, winning the AEW Dynamite Diamond Ring twice in a row. He would also main event opposite Jon Moxley at last year’s edition of AEW’s premier event, All Out, for the AEW World Championship. It does not stop there. He joined one of the most prominent groups in all of AEW history, The Inner Circle. This wouldn’t quench his thirst for greatness. To this end, he disposed of the faction to create his own dominant group known as The Pinnacle.

Saying the sky is the limit for Maxwell Jacob Friedman is an understatement.

No one in recent memory has achieved this much in so very little time. The man is a megastar in the making if he isn’t already. The ceiling is so high that it’s unreachable for most. If MJF has anything to say about it, though, he will push the ceiling higher and higher in his quest for excellence. Future AEW World Champion? Without a doubt. Hall of Famer and legend? At his age and pace, neither is out of the realm of possibility. If there’s one thing to take away from all this, it’s that MJF is better and will be better than you for many years to come and you know it.