Tensions rise to a fever pitch within the IMPACT Wrestling roster this week as they prepare for the second IMPACT Plus special of the year, No Surrender. With IMPACT’s biggest year to date starting off in epic fashion, including the continued partnership/invasion of All Elite Wrestling, the men and women of the never-say-die company look to prove that they will, indeed, never surrender. Here’s what to look forward to tonight at 8 PM on IMPACT Plus.

Full Card for No Surrender

For the first time in his legendary and storied career, Tommy Dreamer will be challenging for the IMPACT World Championship. The current champion Rich Swann made the challenge to Dreamer a couple of weeks ago on IMPACT television, stating that the match was meant to be a birthday gift for the ECW legend. While Dreamer has not been in IMPACT Wrestling specifically for very long, he has managed, in his short tenure, to make himself the most respected locker room leader in the company. He has always been around to help wrestlers in need, including most recently the likes of John E. Bravo, Rhino, and Eddie Edwards.

While many wrestling fans are critical of the decision to have “another old guy” challenge for a wrestling world title, it is hard to argue that Dreamer is more than deserving. His years of experience and dedication to his craft make him an asset to the company. While his win/loss record is less than stellar, his match quality at his age is very impressive. However, while he does not have ring rust, his age may play a huge factor in his match with the much younger and faster Rich Swann. Will heart and resilience be able to defeat ability and speed? 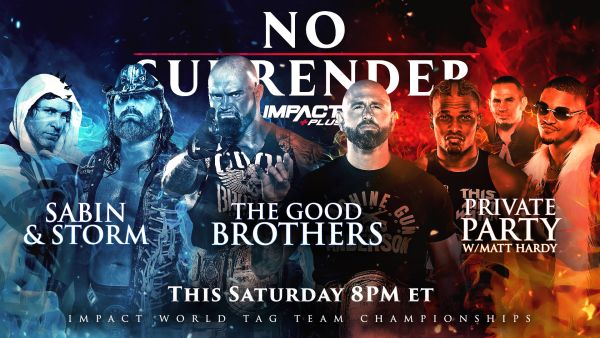 The wrestling world has been awestruck with the action created by promotional warfare between AEW and IMPACT Wrestling. A few weeks ago on IMPACT, Matt Hardy and Private Party took the first shot by the AEW camp when they invaded their Tuesday show. The trio interrupted a confrontation between current IMPACT World Tag Team Champions The Good Brothers and the makeshift tag veterans of James Storm and Chris Sabin, forcing a tag match between “Beer Gun” and Private Party to name the new #1 contenders for the Good Brother’s titles. Though Private Party would win that match, one too many instances of sabotage occurred, causing Scott D’Amore to insert Beer Gun into the No Surrender match. Hardy convinced his clients to involve themselves in the Sabin/Storm versus Good Brothers title match last week, which would come back to bite the young team.

Can Private Party defeat the dominant Good Brothers and bring the IMPACT Tag Team Titles to AEW? Also, can Chris Sabin and James Storm put their past behind them and come together for an impressive tag team title win? 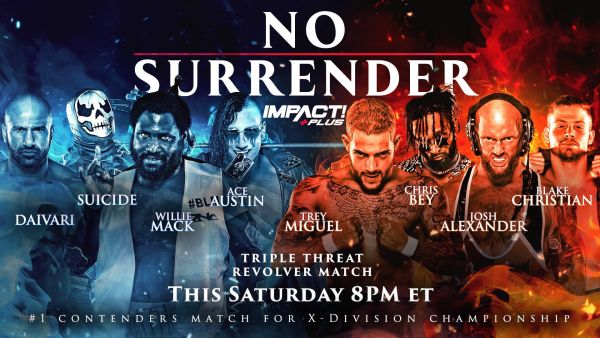 TJP will defend his X-Division Championship in a rematch against Rohit Raju at No Surrender. On the same night, a curious new match format will make its debut, with 8 men battling it out for #1 contendership for the X-Division Championship. As explained by IMPACT Wrestling, this will work much like a Gauntlet Match, with the stipulation of a triple threat where three men will fight at one time. Each time someone is eliminated from the match through pinfall or submission, another competitor will come down to replace them.

Each man in the match has a lot to prove. Blake Christian might be the dark horse of the match, with his performances on IMPACT programming in the last couple of weeks being breakout star material. However, names like Chris Bey and the returning Trey Miguel have been the up-and-coming stars of IMPACT for a long time, and have the most momentum going into this match. Meanwhile, veterans like Daivari, Suicide, and Willie Mack hope to prove that their flames have not yet gone out and that they still have a lot to give to the company. Josh Alexander may have the least to lose, as he looks to pick up the pieces after losing his long time tag team partner Ethan Page.

However, the competitor who has the biggest gripe in the match is Ace Austin, who has already won the Super-X Cup, proving himself to be the top X-Division competitor not currently holding the title. It will be interesting to see which of these 8 men will be able to overcome the odds and earn their spot in history.

No Surrender will be available for streaming tonight at 8 PM on IMPACT Plus.