The show kicks off with a 6 woman tag team match. The International Princess Champion Hikari Noa leads her team with Suzume and Haruna Neko. Hikari has been at the top of her game since she captured the title from Kamiyu and she continues to impress the crowds, this gives Suzume and Haruna a great opportunity to work with one of the top wrestlers in the company. On the other side of the ring is Yuki Aino teaming with Raku and Pom. Yuki Aino obviously does great when it comes to tag matches given she’s a former tag champion. Both Raku and Pom add some amazing character work which makes them exciting to watch in the openers. Expect the champion Hikari to get the win in this one.

Poor Arisu, she has quite an uphill battle going against two former champions in this three-way match. Although the rookie has consistently proven herself to handle herself in the ring with far more experienced wrestlers, two past champions is a tough ask. Kamiyu excels when she’s doing solo work and has really stepped up in terms of character work thanks to ‘That’s J-PW’. Although Rika hasn’t done a lot since losing the title, she still goes out there every show proving that she deserves to be mentioned alongside the other top names in TJPW. This will be an interesting match-up, expect either Rika or Kamiyu to win in the run-up to the Princess Cup.

Despite only wrestling a handful of matches, Kaya has been showing herself to already be smooth in the ring and capable of doing more than most rookies. Pairing her with Mirai makes for an interesting dynamic as Kaya is fast and agile while Mirai is strong and powerful. They face the interesting team of Itoh and Tenma. Maki recently challenged for the tag titles but came up short. Tenma being a tag specialist should utilize that big head of Maki’s to pick up the win on the other team. 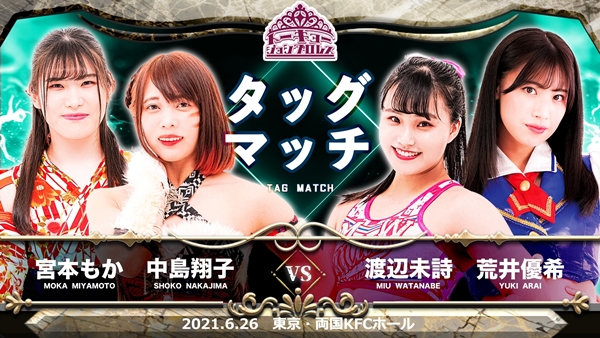 Making another appearance for TJPW is Yuki Arai, since her schedule is a lot lighter compared to the other girls it is always a treat to see her back in the ring. Teaming with Miu Watanabe will make for a fun dynamic as they have pretty contrasting styles. Miu has really improved whether that’s as a singles wrestler or as a tag wrestler making her a strong contender to have a big year ahead. They will face Shoko and Moka. Shoko had a fantastic match against rookie Kaya Toribami at the last Korakuen Hall show. Her partner Moka has been getting a lot of time during ‘That’s J-PW’ since the show started and it has been paying off for her. This will certainly be a fun watch no matter who picks up the win. 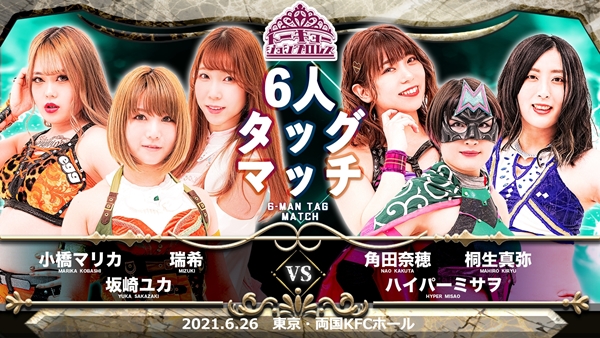 As announced by TJPW, Yuka Sakazaki will be heading to AEW once again in July so this might be one of the last times for a while that fans see her teaming up with Mizuki before her excursion. Expect a lot of speed and some great teamwork between the Magical Sugar Rabbits. Their partner Marika comes off a title match with Hikari Noa, although she didn’t win she has got herself back onto a good stride and shows a lot of promise. Their opponents are quite the mixed bag when it comes to strengths. Hyper Misao will undoubtedly pull some crazy antics to get the upper hand. Nao seems to have found her place in TJPW since she signed last year which has made her matches flow well. Mahiro has been floating around at the moment but she could have a good showing in this one. It seems likely that Yuka, Mizuki, and Marika will pick up the victory. 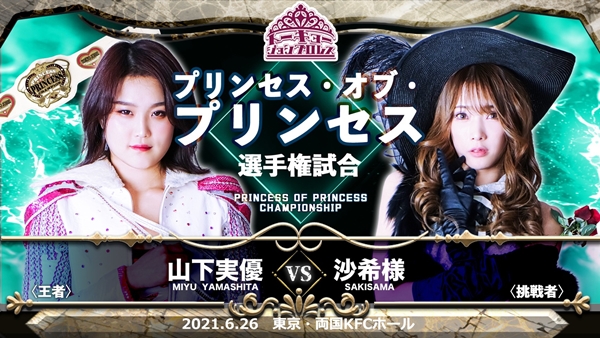 Miyu Yamashita defends her title for the second time in this huge main event. These two faced off at the last Korakuen Hall show in a tag title match that came hot off the heels of the CyberFight Festival match where Miyu successfully defended her title against Yuka Sakazaki. This match was set up after Sakisama and Mei Saint-Michael successfully defended their Princess Tag Titles against Miyu and Maki Itoh. The tag match was easily one of the best tag matches in the company this year and surpasses the match they had during the tag tournament so finally getting a singles match between these two strong competitors has been long-awaited. They have incredible chemistry when they are in the ring together and their styles complement each other nicely, There will be plenty of kicks and submissions in this one and maybe even some underhanded tactics from Sakisama and Mei but this has Match of the Year potential written all over it.