Live from Chase’s Khorassan Ballroom in St. Louis, Missouri, the National Wrestling Alliance celebrates 74 years. NWA 74 is set to take place across two evenings, presenting a number of wrestling matches. There will be numerous championships decided. Case and point, the newly revived NWA United States Tag Team Championship will find a new home for the first time since 1992 in a 10-team battle royal. Furthermore, the NWA Worlds Heavyweight Championship faces perhaps his greatest challenge to date. All of this, and more, will take place at NWA 74. Take a closer look at the action to expect on August 27 and August 28, 2022. 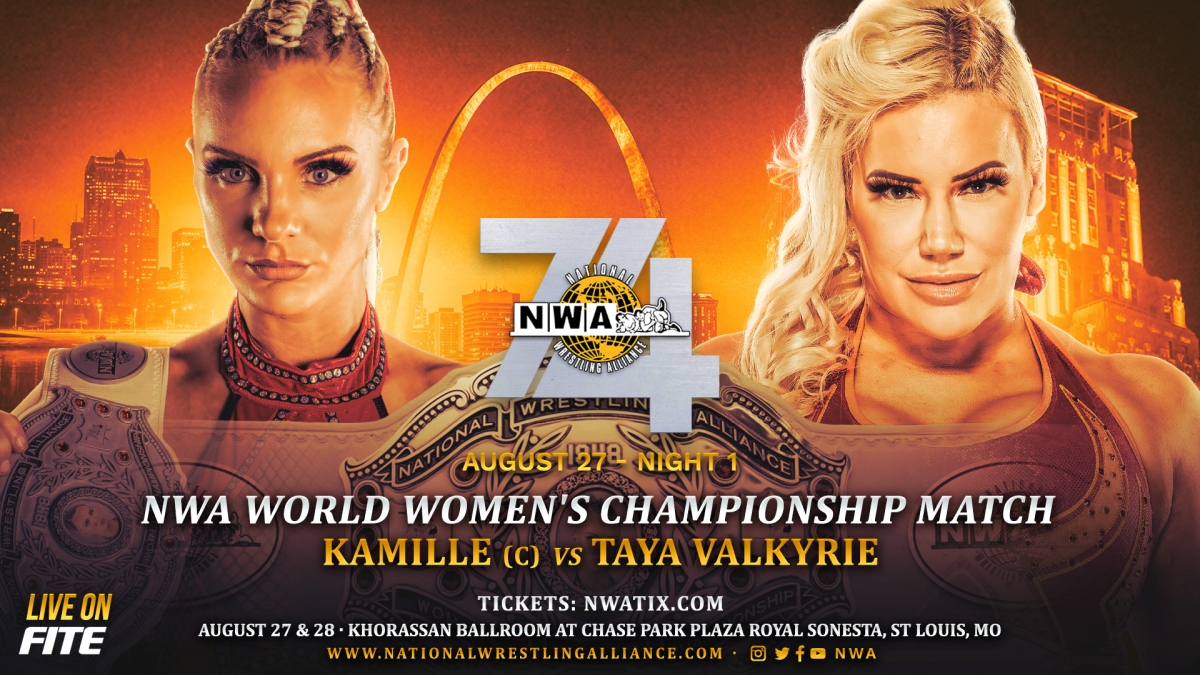 One name that may be busy during NWA 74 Weekend is the World Women’s Champion of the company, Kamille. The long-standing holder of “The Burke” will defend the gold on Night 1 against Taya Valkyrie, who became number one contender following a victory over KiLynn King on the July 27 edition of NWA Powerrr. Currently, Valkyrie holds multiple titles across different promotions. Most notably, as of this writing, she is the 4x Reina de Reinas Champion in Lucha Libre AAA Worldwide. She also holds gold in Major League Wrestling, IMPACT Wrestling, and elsewhere. Meanwhile, Kamille still enters Night 1 of NWA 74 the favorite, which should be no surprise given her seemingly 400+ day reign as the NWA World Women’s Champion. Will her reign continue following Night 1? Whoever comes away with “The Burke” will defend it on Night 2 against the winner of our next contest… 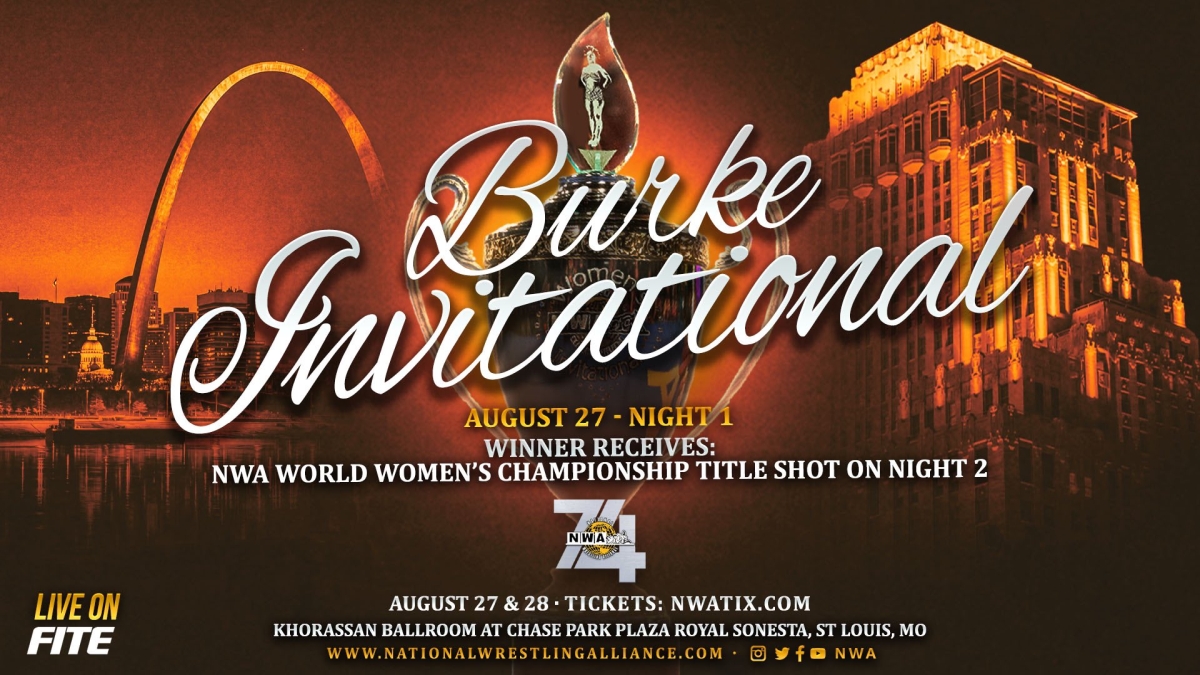 On Night 1 of NWA 74, The Burke Invitational makes its return. This multi-woman gauntlet was last seen at NWA EmPowerrr, which took place last year; it was Chelsea Green that emerged victorious before going on to unsuccessfully challenge either Kamille or Taya Valkyrie for the NWA World Women’s Championship at NWA 73 the following evening. This year’s invitational will be no different, as the last wrestler standing will challenge for the women’s title on Night 2. Last year’s invitational spotlighted prominent competitors such as Green and current All Elite Wrestling star Kiera Hogan, though it also shined a light on up-and-coming stars including Tootie Lynn and Lady Frost. The winner of The Burke Invitational will receive a stellar trophy in addition to the aforementioned title shot. Will this individual leave St. Louis with a surplus of prizes in their possession? 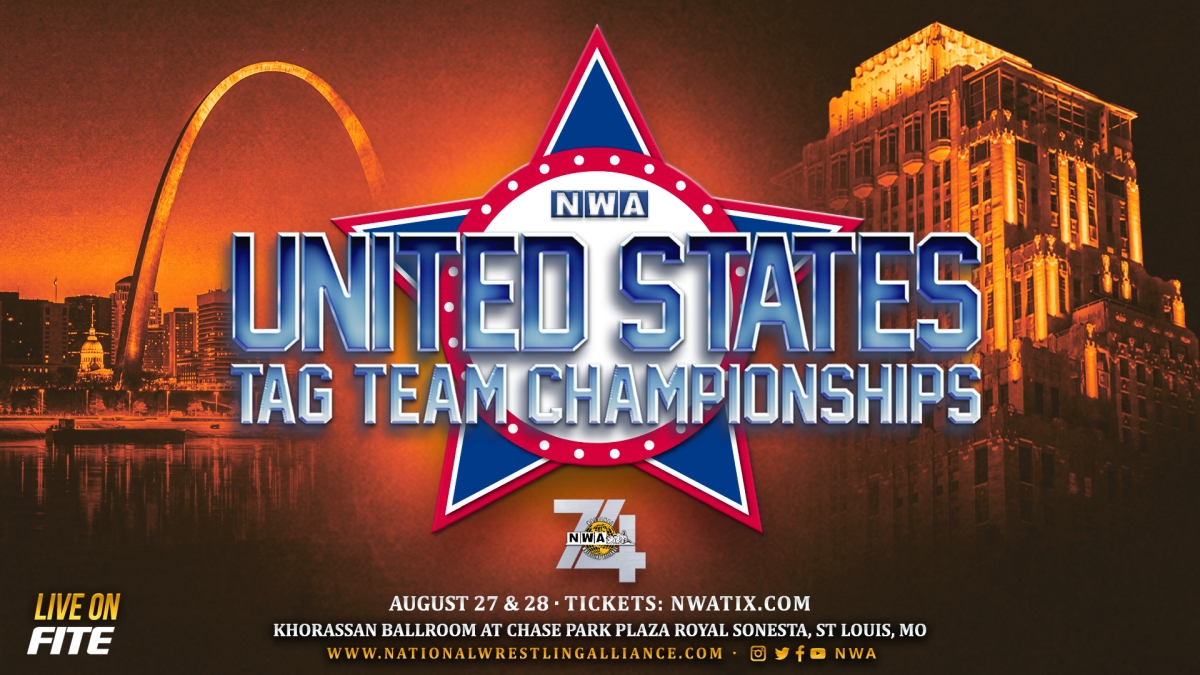 The Revival of the NWA United States Tag Team Championship

On Night 2 of NWA 74, the United States Tag Team Championship returns. More importantly, new titleholders will be crowned in a 10-man battle royal. Since 1950, the titles in question touched many National Wrestling Alliance territories. Said titles were held by such teams as The Steiner Brothers, The Fabulous Freebirds, and The Midnight Express, just to name a few. NWA Owner and Promoter William Patrick Corgan made the decision to revive the belts in light of the growing interest in tag team wrestling, not only in his company but across all wrestling promotions. It’s also important to note that the new NWA United States Tag Team Championship will only be defended on NWA USA, which airs every Saturday at noon on FITE and YouTube, as well as NWA pay-per-views. Which team will leave Chase’s Khorassan Ballroom making history in the process? 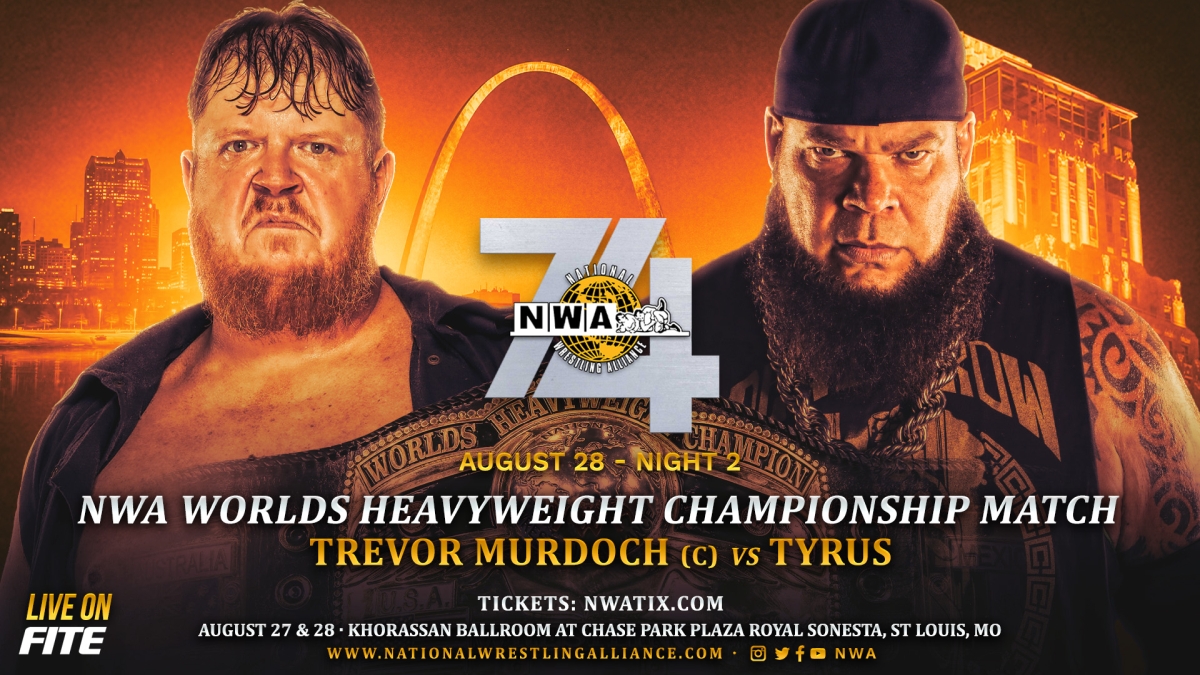 In the main event of NWA 74 Night 2, Trevor Murdoch defends the NWA Worlds Heavyweight Championship against the current NWA World Television Champion, Tyrus. To say that the road to this point has been rocky would be an understatement. This past July, William Patrick Corgan announced a “Race to the Chase” tournament. Following this, the winner would become the number one contender for Murdoch’s title. Outlasting his fellow competitors, it was Nick Aldis, a former multi-time NWA worlds titleholder in his own right, that emerged victorious. It seemed, at that moment, two men would revisit their main event encounter from roughly one year ago at NWA 73. This time, however, it would be Murdoch defending against Aldis, who he won his first world title from at the aforementioned event. However, fate, as well as Corgan, had other plans.

On the June 21 edition of Busted Open Radio, Corgan appeared as a guest. Corgan accused Aldis of politicking, saying that no one stressed him out more in the company than “The National Treasure.” Afterward, Corgan stripped Aldis of his number one contendership, declaring that he would not compete in the main event of NWA 74. Corgan would then name Tyrus as Murdoch’s replacement challenger; given that the NWA World Television Championship has historically led one to world title contention, provided they’re successful, said replacement is appropriate. Will Murdoch leave St. Louis still the NWA Worlds Heavyweight Championship or will Tyrus emerge victorious as a double champion?

Stay tuned to the Last Word on Pro Wrestling for more on this and other stories from around the world of wrestling, as they develop. You can always count on LWOPW to be on top of the major news in the wrestling world, as well as to provide you with analysis, previews, videos, interviews, and editorials on the wrestling world. NWA 74 can be seen on FITE on August 27 and August 28. Tickets are also available via NWATIX.com.