For the first time in over two years, Gatoh Move Pro Wrestling returns to entertaining live crowds. The last event that the purple-and-yellow promotion held in front of fans was back in March of 2020. Following the COVID-19 pandemic, the Gatoh Move crew shifted gears, which led to the advent of ChocoPro, a YouTube wrestling show that gained a devoted audience. However, as the world continues to come out of COVID, restrictions are lessening. This brings us to Gatoh Move’s return to live events, at Itabashi Green Hall, known as #GTMVReturns. Take a look at the scheduled card in addition to a few key matches to keep an eye on. 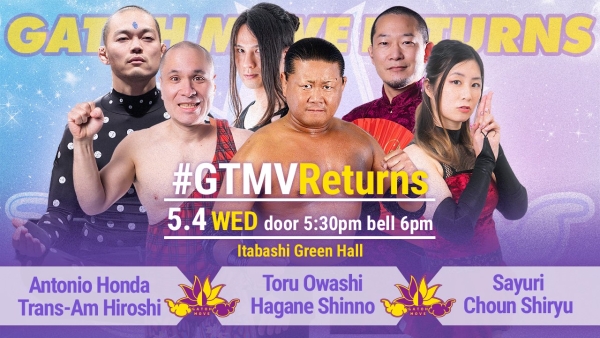 Kicking off #GTMVReturns, live from Itabashi Green Hall, will be a three-way tag team contest. The ice-cold Hagane Shinnou teams with DDT Pro-Wrestling’s own Toru Owashi. In the second corner of the match will stand the eccentric yet crafty duo of “The Honey Hunter” Antonio Honda and the yoga enthusiast of ChocoPro, Trans-Am Hiroshi. Finally, as the one devoted team of the match, Sayuri and former Super Asia Interim Champion Chon Shiryu team up to become Dragon Ninja. One look at this match will show a wealth of veteran talent, though with Sayuri being considerably less experienced than her peers, expect her to make the most of this opportunity. 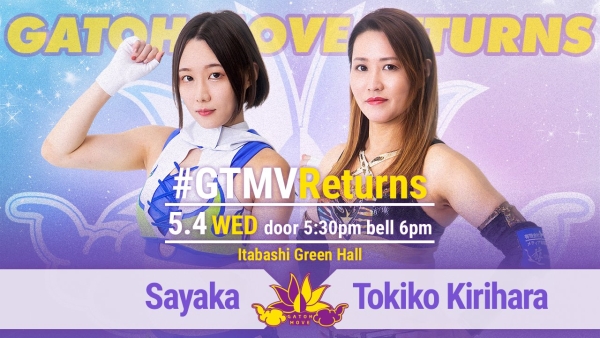 The fourth generation of Gatoh Move stars will be well represented at #GTMVReturns. As mentioned earlier, in the opening match, Sayuri teams with Dragon Ninja partner Chon Shiryu in a three-way tag team encounter. The second match of the show will see one of only two singles bouts scheduled when Sayaka goes toe-to-toe with Tokiko Kirihara. These two former rookies have come a long way since making their professional debuts in 2019. Alongside Sayuri, Lulu Pencil, Chie Koishikawa, and Rin Rin, the latter being the current Yukari Hosokawa of GLEAT, they were part of the company’s fourth-generation class of rookies. Since then, both women have evolved their styles, especially throughout ChocoPro. While Sayaka adopted more of a hard-hitting style, Kirihara has been able to inject more personality into her mixed martial arts-esque approach. Only one competitor can emerge victorious; who will come away with the ever-important win? 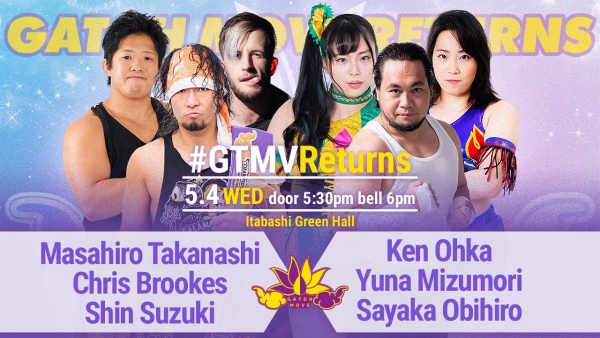 #GTMVReturns wouldn’t feel complete without Gatoh Move’s reigning Asia Dream Tag Team Champions in action. Calamari Drunken Kings, the tag team titleholding team of Masahiro Takanashi and Chris Brookes, join forces with ChocoPro stalwart Shin Suzuki. They will take on the trio of Yuna Mizumori and Sayaka Obihiro, both of whom are Gatoh Move regulars, and Ganbare Pro’s Ken Ohka. Many of the competitors involved in this match have been, to some degree or another, involved with DDT. Thus, one should expect this match to be anything but orthodox. In addition to being Asia Dream Tag Team Champions, CDK are also the reigning KO-D Tag Team Champions of DDT; this should provide Suzuki, who’s been looking for a win in Gatoh Move, with that much more confidence. Keep an eye on this six-person tag team encounter. 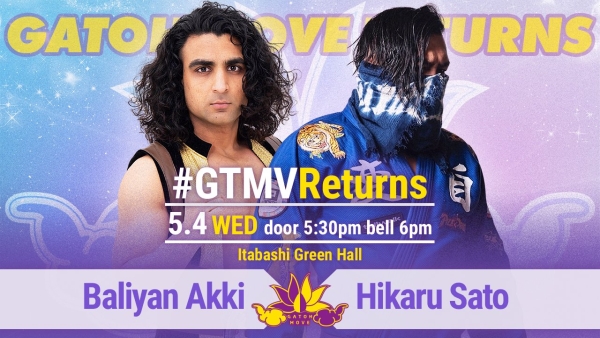 In the second to final match set for #GTMVReturns, the current Super Asia Champion, Baliyan Akki, clashes with All Japan Pro Wrestling’s World Junior Heavyweight Champion, Hikaru Sato. This show is an interesting one for Sato as it marks his first Gatoh Move appearance since December of 2020. He last appeared on Episode #74 of ChocoPro, where he teamed with Yuna Mizumori in a losing effort against Akki and Mei Suruga, collectively known as Best Bros. Sato is not only a trainee of New Japan Pro-Wrestling star Minoru Suzuki but a man with well over a decade of experience under his belt. Sato utilizes a combination of shoot wrestling and martial arts techniques to keep his opponents on the defensive. This won’t be Akki’s first time taking on Sato in singles action; they previously faced each other in a Gatoh Move event back in February of 2018; on this show, Sato was the victor. However, Akki has grown by leaps and bounds since then. As the Super Asia Champion, he’ll be looking to do his promotion proud with a victory.

In the main event of #GTMVReturns, the promotion’s “Apple Girl,” Mei Suruga teams with PURE-J’s new Princess of Pro Wrestling Champion, Haruka Umesaki to take on “Too Much Energy” Chie Koishikawa and joshi puroresu veteran Kaori Yoneyama. Since 2019, Suruga and Umesaki have served as both rivals and partners. They’ve shared wrestling canvases in not only Gatoh Move but Sendai Girls, World Wonder Ring Stardom, and other promotions across Japan. In fact, they previously teamed up last month on Episode #215 of ChocoPro, where they fell to Yoneyama and Emi Sakura, the latter tandem known as RESET. Given Yoneyama’s ties to Gatoh Move’s founder, not to mention her numerous appearances in the promotion, it should come as no surprise that she would be involved in #GTMVReturns as well. This tag team is a major opportunity for Koishikawa as well. Given that she won Sakura’s Expectation Award in 2021, “Chiezo’s” ambitions can’t be denied. Coming away with the win in this main event will only help her accomplish her goals moving forward.

#GTMVReturns will take place on May 4 live from Itabashi Green Hall. It will then be made available to watch for free on the Gatoh Move YouTube channel. To support the company, you can sign up for their Patreon, which features multiple tiers, linked below.