Following a massive two-day event, Gatoh Move Pro Wrestling returns with ChocoPro #201. To say that the aforementioned event was a memorable one would be an understatement. Not only did viewers see tremendous wrestling from the company’s core group and guest stars alike, but a unified, undisputed Super Asia Champion was decided. This isn’t to say that Gatoh Move is resting on its laurels, however, as evidenced by its shows to come. Without any further delay, let’s take a look at the action to ring in the weekend. 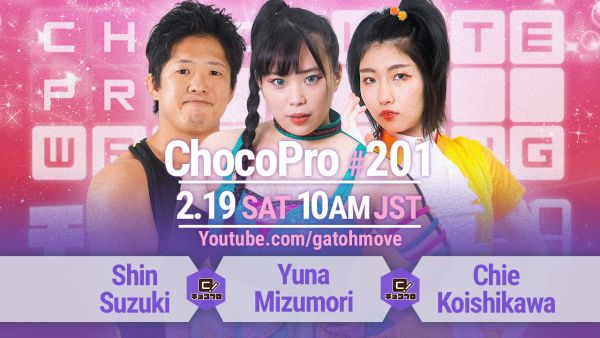 Opening ChocoPro #201 is a three-way encounter featuring Yuna Mizumori and Chie Koishikawa of Gatoh Move in addition to Shin Suzuki of Pro Wrestling HEAT-UP. The major story heading into this match is the newfound momentum of Koishikawa. For context, it was on ChocoPro #199 that “Chiezo” teamed with Kaori Yoneyama to take on TropiKawaild, the duo of Yuna Mizumori and SAKI, to determine new contenders for the Asia Dream Tag Team Championship. Not only did the endlessly energetic Koishikawa win the match, but she did so by picking up a pinfall victory over Mizumori.

It’s fair to say that “Yunamon” will enter this match with something to prove. Not only has she been pinned by Koishikawa, as mentioned earlier, but she’s coming off a victory. On Day 2 of ChocoPro #200, Mizumori teamed with Rina Yamashita in a winning effort against Masahiro Takanashi and Hoshitango. One may consider Shin Suzuki, who’s become more of a regular competitor in Ichigaya Chocolate Square, the wildcard in this bout. Even though attention is set on Mizumori and Koishikawa, who’s to say that Suzuki won’t play spoiler by emerging victorious here?

Best Bros are on top of the Gatoh Move mountain and it’s not difficult to see why. Mei Suruga and Baliyan Akki are coming off a successful Asia Dream Tag Team Championship defense on Day 1 of ChocoPro #200, besting Chie Koishikawa and Kaori Yoneyama to do so. As a result, Best Bros are 414 days and counting into this reign. Just as importantly, however, Akki defeated Minoru Fujita in the main event of Day to become the unified Super Asia Champion. There’s no denying that these two are the top names in Gatoh Move, but this also makes them the biggest targets both in singles and tag team competition.

On ChocoPro #201, in nontitle action, Best Bros battle the duo of Sayaka and Masahiro Takanashi. Sayaka and Takanashi were both busy on Day 2 of ChocoPro #200. Sayaka, also known as Gatoh Move’s “Beautiful Cosplayer,” teamed with SEAdLINNNG Beyond the Sea tag team titleholder Makoto in a losing effort against Koishikawa and COLOR’S Girl’s Pro-Wrestling Unit star Yuko Sakurai. Meanwhile, as mentioned earlier, Takanashi and Hoshitango fell in their own tag team match. However, this episode could be a brand new slate for Sayaka and Takanashi, especially as new challengers step up to the titleholders.