It’s time for celebration for the Gatoh Move Pro Wrestling crew and their fans. For the second time, Gatoh Move will be hosting a two-day special episode. Enter ChocoPro #200, which goes to show that the action planned simply can’t be contained in one card. The first day of the festivities will be nothing short of eventful, ultimately being capped off with a major Asia Dream Tag Team Championship defense. The same can be said for the second day, though on this show, it’s the Super Asia Championship that will be the focal point. For those that will be unable to watch live on the official Gatoh Move YouTube channel, both episodes will be available for viewing shortly after they air. Here’s a quick look at the action to come. 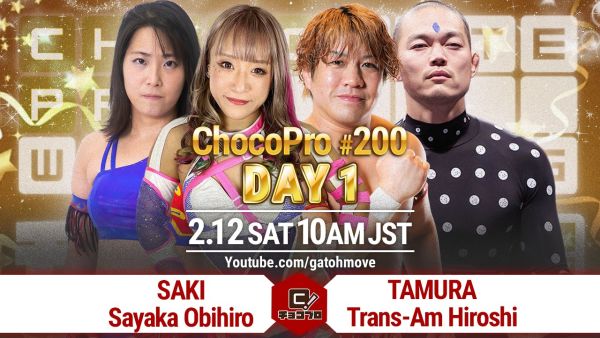 SAKI and Sayaka Obihiro vs. TAMURA and Trans-Am Hiroshi

Kicking off the action set for ChocoPro #200 is an intergender tag team match pitting the hard-hitting SAKI and “The Blue Heart” Sayaka Obihiro against Pro Wrestling HEAT-UP’s TAMURA and the eccentric yoga enthusiast, Trans-Am Hiroshi. On the previous episode of ChocoPro, SAKI and Obihiro were on the losing ends of their respective matches, so they will be all the more motivated to enter this episode with the will to win. It won’t be an easy feat to accomplish, however, due to the technical experience of TAMURA and the unpredictable nature of Hiroshi. Regardless of which team walks away victorious, one shouldn’t write off the possibility of the song stylings of Hiroshi coming into play. 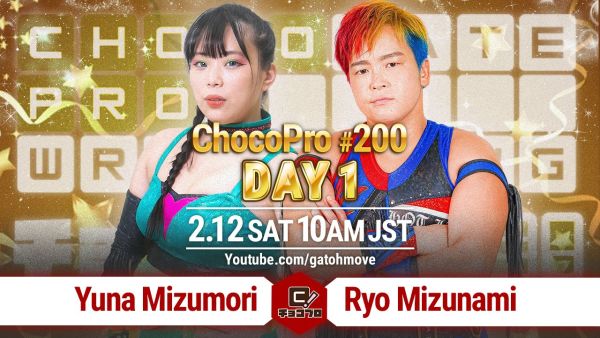 ChocoPro #200 Day 1 will also feature the return of “Aniki” herself, Ryo Mizunami. Dripping with a sense of swagger all her own, Mizunami has become a popular star not only in Japan but North America, the latter largely a result of her stints in All Elite Wrestling in 2019 and 2021. Additionally, from Pro Wrestling WAVE to SEAdLINNNG, Mizunami’s success hasn’t been without singles and tag team titles alike. Following a 7-month-plus absence, Mizunami steps back into Ichigaya Chocolate Square, this time to take on Yuna Mizumori in singles competition. Much like “Aniki,” Gatoh Move’s “Pineapple Girl” is a power-oriented wrestler, using explosive offense to take the fight to opponents of all sizes. Expect this bout to be nothing short of a hoss fight. 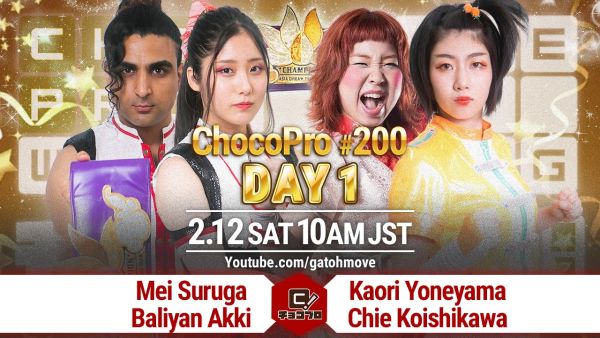 To cap off ChocoPro #200 Day 1, the Asia Dream Tag Team Champions will defend the purple belts. Best Bros, the reigning team of Mei Suruga and Baliyan Akki, will be in action against Kaori Yoneyama and Chie Koishikawa, who won the previous episode’s main event to become the number one contenders. Originally, Best Bros were set to face Yoneyama and Hagane Shinnou before the latter was pulled due to the latter’s recent health condition. It’s easy to see why Best Bros have been confident as champions. As of this writing, they’ve held the Asia Dream tag team titles for over 400 days. Over this period, Suruga and Akki amassed 9 defenses, the last being the result of a time limit draw. Furthermore, Akki recently captured the Super Asia Interim Championship, which has done nothing short of instilling further confidence in the champions. However, their future challengers, affectionately dubbed “The Ochazuke Sisters,” aren’t to be overlooked. This is especially true for “Chiezo,” who secured the pinfall victory over Yuna Mizumori to earn this title opportunity. 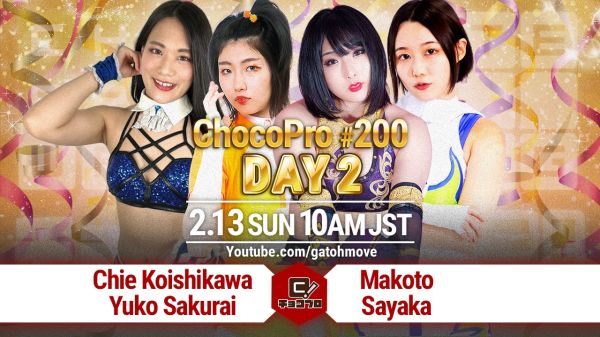 Chie Koishikawa and Yuko Sakurai vs. Makoto and Sayaka

In one of the preliminary matches of ChocoPro #200 Day 2, viewers will see competitors from different organizations. Chie Koishikawa and Sayaka, both of whom are fourth-generation Gatoh Move stars, will be on opposing teams. Teaming with “Chiezo” will be Yuko Sakurai, who may be known by joshi puroresu fans for her recent work in Pro Wrestling WAVE, Ice Ribbon, and GPU Color’s. She’s also made ChocoPro appearances dating back to last year. Teaming with Sayaka will be Makoto who, with 15 years of experience under her belt, will be entering this match as the veteran. She is also a titleholder, being one-half of SEAdLINNNG’s Beyond the Sea Tag Team Champions alongside ASUKA, also known as VENY. This tag team match promises to set the pace for the rest of the show. 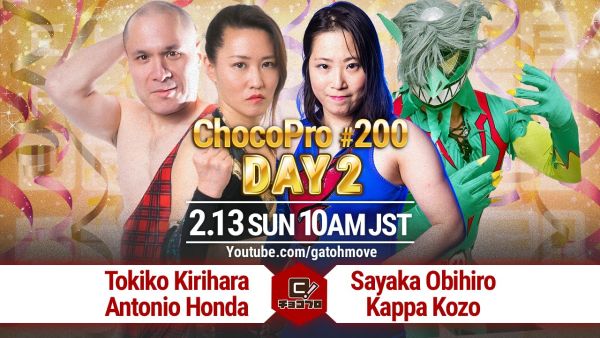 Also in action, on ChocoPro #200 Day 2, is the comedic yet effective duo of Tokiko Kirihara and Antonio Honda. Collectively known as Black Comaneci – or White Comaneci, depending on the situation at hand – this tandem is known for not only their melodies but their sense of trickery as well. It’s been the latter that’s helped them become a proverbial thorn in the sides of their opponents. The big story heading into this match, however, is the opposing team. Veteran joshi wrestler Sayaka Obihiro will be entering this match with unorthodox preparation. The reason for this is that she will be working alongside Kappa Kozo, the very “yokai” with who she’s been at odds for months. In fact, on the previous episode, Kozo defeated “Obi-san” in singles action. On Day 2 of ChocoPro #200, they will have to get on the same page. 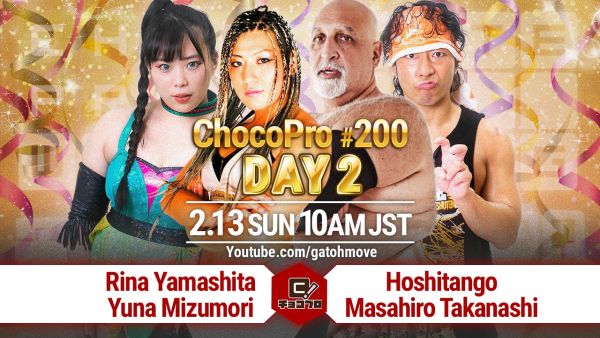 Rina Yamashita and Yuna Mizumori vs. Hoshitango and Masahiro Takanashi

ChocoPro #200 Day 2 will also see Hoshitango reuniting with Masahiro Takanashi, the latter of whom has been instrumental in Gatoh Move’s history and growth. Takanashi being part of this event’s festivities should come as little surprise to long-time fans of the show. Hoshitango will be competing as a replacement for Chris Brookes. The former sumo wrestler from Argentina has made multiple ChocoPro appearances, acting as a nigh immovable force on the show. Facing them will be the makeshift duo of deathmatch brawler Rina Yamashita and “The Pineapple Girl,” Yuna Mizumori. Yamashita will be making her first ChocoPro appearance since this past December when she bested Sayaka in singles action. She’ll also enter this match one-half of the current OZ Academy Tag Team Champions, having won the titles alongside Hiroyo Matsumoto at the tail-end of 2021. 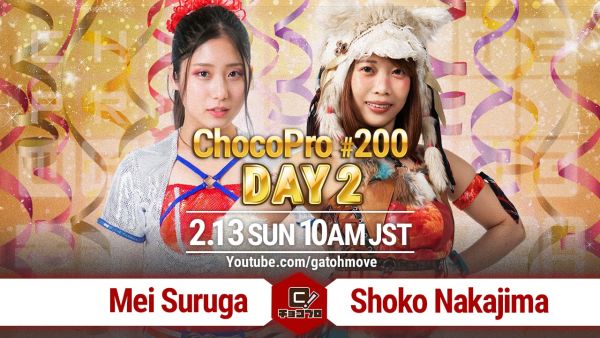 Making her Gatoh Move debut, on ChocoPro #200 Day 2, is Tokyo Joshi Pro-Wrestling’s own Shoko Nakajima. Also known as “The Big Kaiju,” Nakajima is among the longest-standing stars in TJPW. For proof of her success, look no further than the fact that she is a former TOKYO Princess Tag Team Champion and Princess of Princess Champion. American wrestling fans may also be familiar with her appearances in All Elite Wrestling, most recently facing Riho on AEW Dark back in February 2020. Nakajima will enter Ichigaya Chocolate Square for the first time, taking on the company’s fast-rising star in Mei Suruga. Not unlike “The Big Kaiju,” “Mei-chan” has also enjoyed AEW appearances, though the jury’s out on whether she appeared in TJPW as well. In any event, from an in-ring standpoint, this bout has the potential to steal the show.

Finally, in the main event of ChocoPro #200 Day 2, an undisputed Super Asia Champion will be decided. Baliyan Akki, who was crowned the Super Asia Interim Champion last month, will be battling the original Super Asia Champion, Minoru Fujita. With two men holding the blue belt, there can only be one man standing atop the mountain of Gatoh Move. It’s poetic that this match takes place on this show given that their first match for the Super Asia title took place on ChocoPro #100 Day 2. It was on this show that Fujita bested Akki to claim the vacant championship as his own. This loss ate away at Akki in the months that followed, the self-proclaimed “Ace” of ChocoPro yearning for nothing more than to realize what he felt was his destiny. On this show, he will be that much closer to doing exactly that. This rematch may be the most important bout in either man’s career, making it that much more must-see.

Both episodes will air live on the Gatoh Move YouTube channel for free before being available for on-demand viewing afterward. To support the company, you can sign up for their Patreon, which features multiple tiers, or their own on-demand streaming service linked below.