On this week’s NWA Powerrr, viewers will see a rare world title defense as Trevor Murdoch puts his gold on the line against Mike Knox in what promises to be a hard-hitting encounter. Also included in tonight’s action is a No Disqualification Match, tag team wrestling, and much more. All of this will take place tonight, at 6:05 PM EST, on FITE. Without any further delay, let’s take a deeper dive into the action to come. 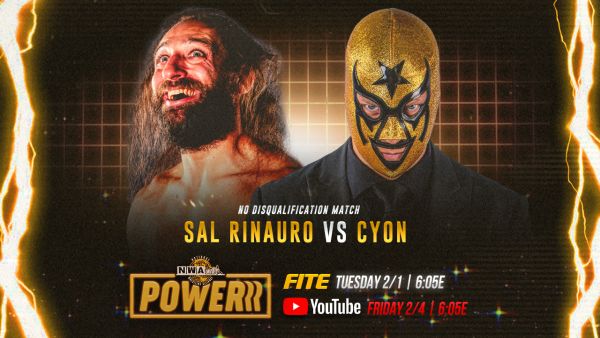 No Holds Barred on NWA Powerrr

In one of multiple contests scheduled for this week’s NWA Powerrr, the disturbed Sal Rinauro takes on the masked man, Cyon, in a No Disqualification Match. In late 2021, Rinauro was fixated on the idea of joining Father James Mitchell and Judais. Mitchell agreed, but only under the condition that a “Loyalty Test” be passed. This led to Rinauro following orders including barking and begging like a dog, kissing the feet of Judais, willingly allowing Judais to chokeslam him, and even consuming a glass of Romanian blood. Rinauro even served as a human bullet for Judais in the latter’s match against Cyon on the January 11 episode of Powerrr. There’s no denying the fact that the good-natured Rinauro has been corrupted by the devilish duo of Mitchell and Judais. It would also seem that Rinauro’s path to acceptance continues with this contest against Cyon, who may not be so quick to take pity. Despite Cyon’s respect for his opponent, as he expressed on the January 18 episode of Powerrr, he has dedicated his life to wrestling. See how this fight unfolds on FITE.

It’s rare when the NWA Worlds Heavyweight Championship is defended on non-pay-per-view events. In fact, the last time that “The Ten Pounds of Gold” was defended on Powerrr was back in January of 2020, when Nick Aldis put the title on the line against Ricky Morton. However, this title defense on Powerrr is an important one, as champion Trevor Murdoch and challenger Mike Knox have a rivalry dating back to this past October at NWA’s By Any Means Unnecessary supercard. During a post-show fan meet, Murdoch was violently attacked by Knox. Murdoch and Knox would then meet at Hard Times 2, and while Murdoch successfully retained the NWA world title, his victory was spoiled by the presence of Matt Cardona. Since then, Knox and Cardona have been on a quest to not only make NWA better, in their minds, but capture gold. This week’s NWA Powerrr sees a rematch as Mike Knox vies for the gold against Trevor Murdoch. The champion would be wise to keep an eye out, lest Cardona make his presence known.