This week, on NWA Powerrr, Matt Cardona and Mike Knox will sound off following the former’s successful National Wrestling Alliance in-ring debut. Viewers will also see women’s action featuring both veteran and up-and-coming stars alike. Case and point, Madi Wrenkowski, who many wrestling fans may know from her various All Elite Wrestling appearances, takes on the legendary Melina. There’s much to see on this week’s show, whether you plan on watching live on FITE or later this week when the full episode drops on the official NWA YouTube channel. Here’s what to expect.

In one of the featured women’s matches on NWA Powerrr, Madi Wrenkowski takes on Melina. It’s important to note that this match marks the National Wrestling Alliance in-ring debut of the young Wrenkowski, who’s been making a name for herself across different promotions. In addition to AEW, as mentioned earlier, independent wrestling fans may know her from her work in Mission Pro Wrestling, Booker T’s Reality of Wrestling, and elsewhere. Wrenkowski’s first NWA outing will be far from a cakewalk, however, as Melina’s resume speaks for itself. In WWE alone, she won 5 women’s titles, becoming one of the more successful women’s stars of her era. Her last NWA match took place at Hard Times 2, where she was unsuccessful in defeating World Women’s Champion Kamille. Melina will look to rebound in 2022, starting with a victory over Madi Wrenkowski on NWA Powerrr. 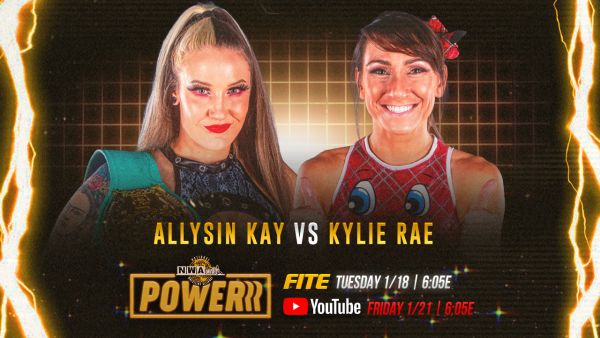 Kylie Rae Tests Herself Against a Titleholder

Also in action is Kylie Rae, as the “Smiley” one takes on one-half of the NWA World Women’s Tag Team Champions, Allysin Kay. Anyone that has been keeping up with NWA Powerrr, as of late, will attest to how Rae has steadily moved up the women’s tag team scene. Earlier this month, alongside Tootie Lynn, Rae picked up a victory over Missa Kate and Kamille. To say that this loss infuriated Kamille would be an understatement, as the NWA World Women’s Champion blew off Kate afterward. This was despite the fact that Kamille wasn’t the one pinned. “Smiley” Kylie Rae has considerable momentum on her side and it may come in handy as she battles Allysin Kay. Even though this is a one-on-one encounter, the result here may determine whether Rae and her newfound partner, Lynn, move closer to the women’s tag team titles. Tune into this week’s NWA Powerrr to see how it unfolds.