This Saturday, the National Wrestling Alliance presents NWA Hard Times 2, and to say that this is a loaded show would be an understatement. This is evident from the jump, as all titles within the promotion will be on the line. Furthermore, we will see Ring of Honor and IMPACT Wrestling gold defended in separate encounters. As if this wasn’t enough, the NWA recently revived its Junior Heavyweight Championship, and the quest to crown its first titleholder, since said revival, begins here. Throw in appearances from wrestling legends Jazz and Mick Foley, and this looks to be an event not to miss. Here’s what to know before the show takes place this weekend. 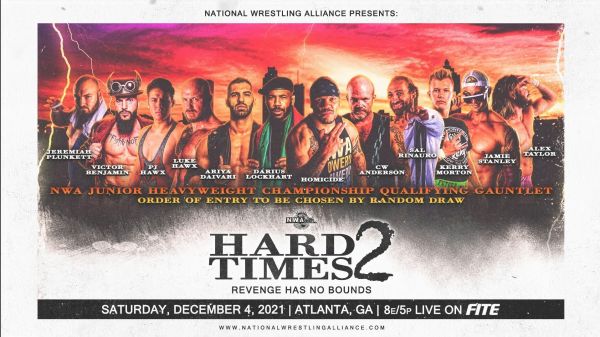 As stated earlier, the National Wrestling Alliance recently announced the revival of a long-forgotten singles title. The NWA World Junior Heavyweight Championship was established in May 1945, with Ken Fenelon being the first titleholder. Throughout his career, the Iowa-born Fenelon became a 2x NWA World Junior Heavyweight Champion, holding the belt for a total of 301 days. The title went on to be held by a number of notable stars throughout wrestling. Such names include, but aren’t limited to, Tiger Mask IV, Último Dragón, Jushin Thunder Liger, and “Classy” Freddie Blassie. The championship would be rendered inactive in 2017, with Texas-born Barrett Brown being the last recognized titleholder.

With the title’s recent revival, a new champion must be crowned, which is a quest that begins at NWA Hard Times 2. In one of the scheduled matches of the night, 12 men will compete in a qualifying gauntlet match, with the winner immediately going on to the finals. The second participant will have a more straightforward route following a one-on-one encounter. At Hard Times 2, ROH alumni Rhett Titus will face off against 3x IMPACT World Champion Austin Aries. The winner of this match will move forward to potentially hold championship gold. Tune into NWA programming to stay up-to-date with the changing landscape of the Junior Heavyweight Championship picture. 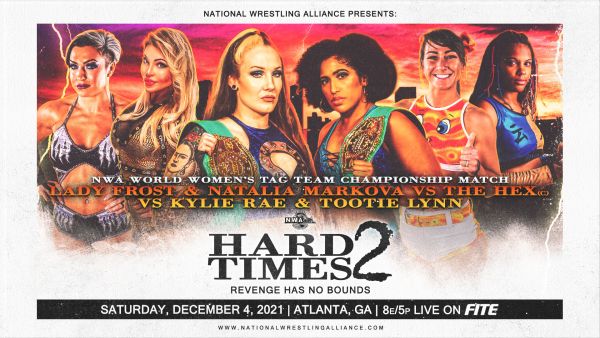 NWA Hard Times 2 will see not one, not two, but three different tag team titles contested. The first of these is the ROH World Tag Team Championship. With Ring of Honor’s recent announcement of its upcoming restructuring, many of its stars can be seen in other locations, Jay Lethal in All Elite Wrestling being among the most prominent examples. As for The OGK, the reigning ROH World Tag Team Champions, they have been laser-focused on the NWA. Mike Bennett and Matt Taven debuted at the By Any Means Necessary supercard late last month, defeating The Fixers. At Hard Times 2, they defend the ROH tag team titles against former NWA World Tag Team Champions Aron Stevens and Kratos.

The NWA World Women’s Tag Team Champions will also be defended, as titleholders The Hex compete against Lady Frost and Natalia Markova and the duo of Kylie Rae and Tootie Lynn in three-way action. The Hex, the team of Allysin Kay and Marti Belle, won the revived women’s tag team titles at this past August’s NWA EmPowerrr in a tournament. Since then, Kay and Belle have successfully defended the titles multiple times, not only in the NWA but on ROH programming. With that said, their upcoming title defense at Hard Times 2 may be their tallest task to date. Neither of the two opposing teams should be overlooked. This show also marks Markova’s NWA debut; the Russian sensation has appeared for SHINE Wrestling, EVOLVE, AEW, and other promotions over the past few years.

Finally, the NWA World Tag Team Champions defend their gold against tournament winners. For those that are new to the NWA, The End are entering this match as the winners of the company’s recent World Tag Team Title Eliminator Tournament. In a lineup featuring 7 other teams, Odinson and Parrow went the distance and earned their opportunity at Hard Times 2. The reigning titleholders, Bestia 666 and Mecha Wolf 450 of La Rebelión, won’t be easily dispatched, however. They won the NWA World Tag Team Championship at NWA 73, holding onto the belts ever since. The powerhouse approach of The End and the technically swift offense of La Rebelión should make for an entertaining contrast. 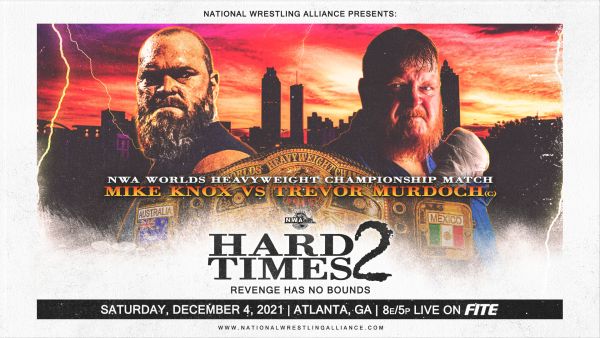 In the main event of NWA Hard Times 2, reigning Worlds Heavyweight Champion Trevor Murdoch defends the “Ten Pounds of Gold” against Mike Knox. The origins of this match date back to By Any Means Necessary. At the event in question, Murdoch took part in a fan photoshoot inside a steel cage, which was used in the match between Jax Dane and Crimson that closed the show proper. Suddenly, to the surprise of those in attendance, Knox hit the ring, but not before attacking Murdoch’s son. Knox was relentless in his assault on the champion, even locking the cage door so no one could easily intervene. To add insult to injury, Knox attacked Murdoch with a steel chair, continuing said assault in front of the latter’s family and peers.

Following this event, Knox explained his actions, stating that he didn’t see Murdoch as a champion. Knox regarded Harley Race, Murdoch’s trainer and mentor, as “a man’s man,” but he didn’t see the same in the current NWA Worlds Heavyweight Champion. Murdoch, in response, demanded a match with his attacker at Hard Times 2. NWA President William Patrick Corgan would make the match official, putting the NWA Worlds Heavyweight Championship on the line. This marks Murdoch’s first title defense and it’s a notable one, to be certain. From WWE to IMPACT Wrestling to various independent promotions, Knox’s reputation speaks for itself. Can he end the title reign of Trevor Murdoch before it’s had a chance to truly begin?