On ChocoPro #187, Gatoh Move Pro Wrestling gets one of its brightest stars back. Following her “Elite” excursion to North America, Mei Suruga will be making her return to title contention. This particular return will be one that tests her mettle, as she and Baliyan Akki put the Asia Dream Tag Team Championship on the line. How will Best Bros look in their first title defense since the fall? Here’s what to know about this show prior to its airing on the Gatoh Move YouTube channel. 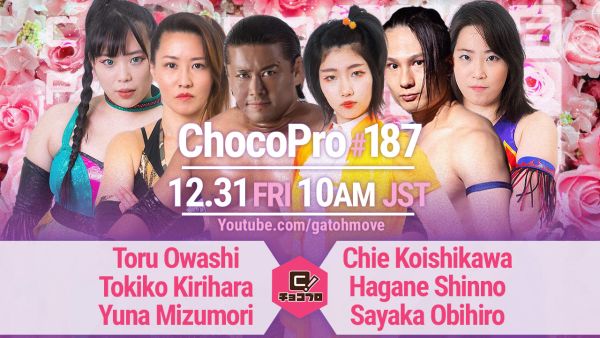 ChocoPro #187 sees the return of wrestling veteran Toru Owashi as he teams with Tokiko Kirihara and Yuna Mizumori to take on Sayaka Obihiro and the energetically hard-hitting duo of Egg Tarts. To provide some background, Owashi is a powerhouse whose career spans roughly 2 decades, having competed everywhere from Dragon Gate to DDT Pro Wrestling. He’s also made multiple Gatoh Move appearances since 2014, his most recent being on Episode #76 in December 2020. One year later, Owashi returns to compete alongside a fellow powerhouses “Otoki-san” and “Yunamon.” This is a solid team on paper, but given the success and momentum enjoyed by Chie Koishikawa and Hagane Shinnou, as well as that of “Obi-san,” it’s hard to count out the opposing trio so easily. No matter which team emerges victorious, this will be a contest to keep an eye on. 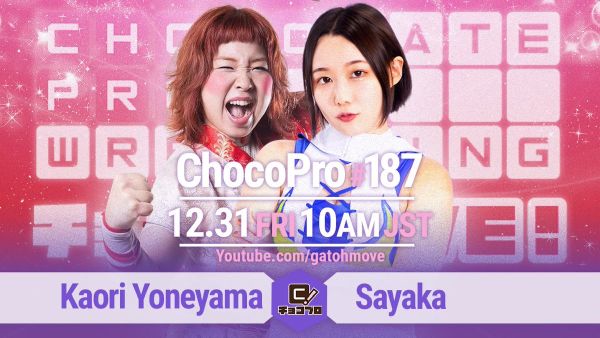 Another veteran set to step into Ichigaya is Kaori Yoneyama, whose experience and credentials speak for themselves. Often possessing a playful disposition, Yoneyama is a formidable competitor who should be taken seriously, especially by those looking to establish themselves in professional wrestling. Enter Sayaka, ChocoPro’s MVP of Season 10, who’s had her own run-ins with Yoneyama in the past. However, these have been in tag team contests, meaning that ChocoPro #187 marks the first time Sayaka and Yoneyama meet one-on-one. Though not boasting the same or similar accolades as her elder, Gatoh Move’s “Beautiful Cosplayer” boasts a hard-hitting wrestling style that serves as a stark contrast to her soft-spoken demeanor. Will this be enough to help her secure a win?

ChocoPro #185, Part 2 of the ChocoPro holiday festivities, opened with a major surprise. The show proper opened with Baliyan Akki providing a rundown, which has become the standard for the show. During this, he also confirmed the return of Mei Suruga, who had been spending the last month or so in America while appearing for All Elite Wrestling. Akki’s attention was soon drawn to a cardboard box, the top taped up. As Akki went to undo the tape, suddenly, a festive “Mei-chan” sprung out of the box, energetically declaring her return. Finally, Suruga was back. Moreover, Akki had his friend and tag team partner back, and not a moment too soon.

On this episode, Mei Suruga teams with Baliyan Akki to defend their Super Asia tag team titles against Calamari Drunken Kings, Masahiro Takanashi and Chris Brookes. To say that Best Bros is a dominant tag team would be an understatement. First, as of this writing, Best Bros are just 1 day shy of 365 days – a full year – as Asia Dream Tag Team Champions. Second, they have 8 successful defenses to their name, retaining the purple belts against such tandems as Egg Tarts, TropiKawaild, and the deathmatch tandem of Rina Yamashita and Minoru Fujita. When united, Suruga and Akki are nigh unstoppable. However, if there’s any one team that will have something to say about this, it would be Takanashi and Brookes.

Calamari Drunken Kings are not unlike Best Bros in that they are tag team partners and real-life friends. For proof of this, look no further than DDT Pro Wrestling, where Takanashi and Brookes are regular competitors. If they aren’t teaming in DDT, they can be seen pursuing other interests, whether it’s Takanashi recently vying for the DDT Universal Championship or Brookes finding himself amidst the allyship of chaotic personalities Maki Itoh and Minoru Suzuki. On ChocoPro #187, CDK will be back in action, this time with gold in their sights. See how this title match unfolds as 2022 approaches.