With 2021 coming to a close, Game Changer Wrestling intends to close out the year with a bang. GCW Til Infinity will take place live from Showboat Atlantic City in New Jersey, which has become a popular venue for the promotion on the East Coast. This show has plenty to offer, from the core GCW competitors that helped push the company forward throughout 2021 to returning names that fans are hotly anticipating. This Friday, on New Year’s Eve, GCW intends to go “Til Infinity and Beyond” in Jersey. Here is what viewers in attendance and those watching from home should know. 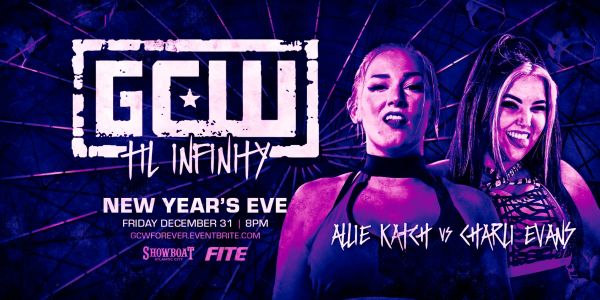 A First-Time Encounter to Close Out 2021

The first match that Game Changer Wrestling announced for GCW Til Infinity has been touted as a first-time encounter. At The Showboat, GCW stalwart Allie Katch will take on “The Violence Artist” herself, Charli Evans. From hard-hitting encounters with the likes of Mance Warner and Matthew Justice to BUSSY’s blood feud with Matt Cardona and Chelsea Green, Katch has had an eventful 2021 in GCW. Time and time again, the Texas native has proven that she is unafraid to take things to the extreme, even at the cost of her own body. This will be no different come Friday, as she takes on a new opponent that thirsts for carnage.

Charli Evans made her GCW debut this year, competing in a eight-person elimination match at Series of Survivals under the Jersey Championship Wrestling banner in November. That same month, Evans debuted for GCW proper, losing to Rina Yamashita at Evil Deeds in a deathmatch that many viewers considered the contest of the night. The following night, she was announced as a surprise participant in the Nick Gage Invitational 6 tournament. This was a star-making night for her, as she made it all the way to the semifinals. Evans quickly endeared herself to the GCW faithful. Moreover, she did so by putting her body on the line and exhibiting a propensity for delivering punishment. Can she do the same against Katch, closing out the year with a victory? 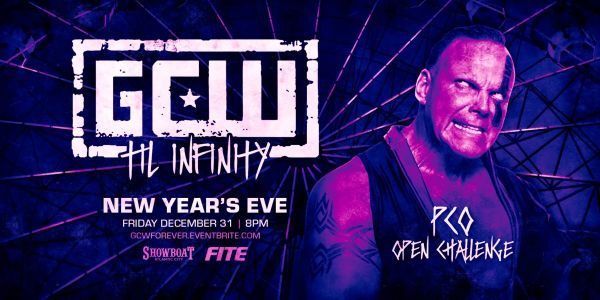 This former Ring of Honor World Champion will also be in action at GCW Til Infinity. Whoever steps forward to face “The French Frankenstein,” however, is unknown. No matter who it is, the individual brave enough to answer his challenge is going to have a long night in New Jersey. PCO has earned the aforementioned nickname, his brute strength and borderline inhuman ability to absorb pain as legendary as the career he’s built for over 3 decades. Though he’s been a world champion in multiple organizations, he’s an accomplished tag team wrestler, having won the tag team gold of ROH, the National Wrestling Alliance, and WWE alike. Despite being in his mid-50s, this monster has shown that there’s more chaos to create.

PCO is no stranger to GCW, either, having made his return to the organization earlier this month at Blood on the Hills. Prior to this, he appeared on multiple shows, building his name within the independent wrestling powerhouse. 2018 was his breakout year as a revived veteran, having a Match of the Year contender against WALTER at Joey Janela’s Spring Break 2 and capturing the GCW Extreme Championship later that year. From Masato Tanaka to Matt Riddle, PCO competed against a diverse array of opponents in GCW. This Friday, however, it’s the monster that controls his destiny. See who answers PCO’s open challenge at Til Infinity. 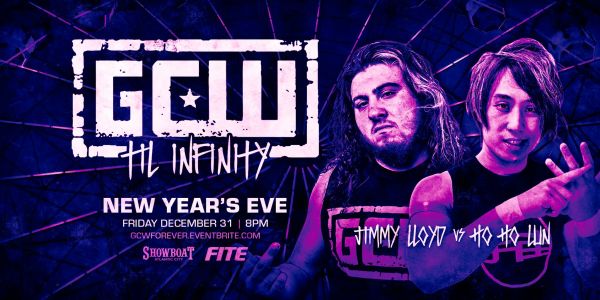 Making his Game Changer Wrestling debut, at GCW Til Infinity, is Hong Kong high-flying star Ho Ho Lun. WWE fans may recall that he was a participant in 2016’s Cruiserweight Classic and Dusty Rhodes Tag Team Classic tournaments. By that point, however, he had been wrestling for roughly 6 years. Influenced by both WWE and New Japan Pro-Wrestling, Lun became a notable star on the Asian independent scene, working for such organizations as China Wrestling Entertainment and Michinoku Pro Wrestling. Today, he can be seen in Dragon Gate, where he debuted in 2019 and has worked largely in tag team matches. Now that he’s stateside once more, Lun debuts for GCW this Friday, quickly learning that he’s “f*cking with a Different Boy.”

Hailing from New Jersey, Jimmy Lloyd is an avid deathmatch wrestler, never shy about taking matters to the extreme. For evidence of this, look no further than his ongoing feud with G-Raver throughout 2021. The feud in question saw them put one another through punishment of the highest levels. Despite the punishment in question, Lloyd hasn’t slowed down. Rather, he’s been itching for his last challenge of the year. G-Raver, Drew Parker, Allie Katch, Dark Sheik – these are just a few of the names that Lloyd faced off against in GCW in 2021. The debuting Ho Ho Lun is an intriguing way to wrap up the year. How will this meeting of wrestling styles unfold? Tune into FITE this Friday to find out.

GCW Til Infinity will take place in Atlantic City, New Jersey on December 31, 2021.

Stay tuned to the Last Word on Pro Wrestling for more on this and other stories from around the world of wrestling, as they develop. You can always count on LWOPW to be on top of the major news in the wrestling world, as well as to provide you with analysis, previews, videos, interviews, and editorials on the wrestling world. GCW Til Infinity is set to air Friday at 8 PM EST on FITE. Tickets are also available via Eventbrite.