Though not an official part of The Wrestival in the sense that if you buy the golden ticket for $100 to attend all the shows, Pizza Party Pro is not included, Big Eyes x Bigger Dreams still kicks off The Wrestival unofficially as this event takes place right before the third season finale of Uncharted Territory at the White Eagle. Big Eyes x Bigger Dreams consists of fan favorites and generally names that wrestling fans already know but also some other names they might not but should soon. If you’re going to the White Eagle for Uncharted Territory, you might recognize Kennedi Copeland, LMK, The Outfielders, and Violence Is Forever, amongst others.

There also exists this weird aspect of The Wrestival being from the last two days of 2021 and going into the first day of 2022. While three different promotions will be running their first show of 2022 during The Wrestival, others will be closing out their year. But to think of The Wrestival as one big event, this also can make it seem as if this is the first show of the new year in some ways for Pizza Party Pro even though it technically is not. Whether you think of this as going out of 2021 or going into 2022 with a bang, Pizza Party Pro is definitely looking to bring it! 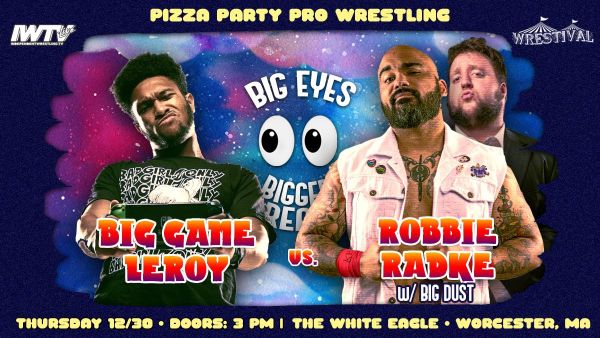 Whether you think of this as ending 2021 on a high note or starting off 2022 with a bang, perhaps no one else in the world of professional wrestling has had the same year as Big Game Leroy, who has had a wildly successful 2021. Closing out the year as the current Invictus Pro Wrestling Social Media Champion, Leroy might not be a known name in the White Eagle- yet- as he has not appeared on Beyond Wrestling before, but he still would be considered more well known than Robbie Radke perhaps.

Robbie Radke, the self-proclaimed leader of The Goons, will likely be looking to make a name for himself on a show which also features fellow Goon Myles Millennium. The fact that Radke might be the least known of all of The Goons should be a motivating factor in making a name for himself here with a win over Big Game Leroy. One also has to assume that the powers that be in Invictus Pro are watching this match carefully, as a win here for Robbie Radke could also lead to an eventual Social Media Championship match in 2022. 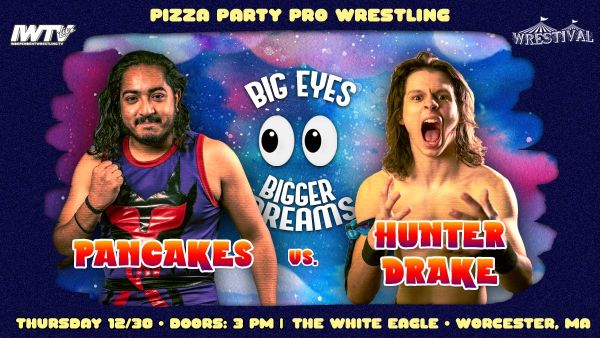 Many of the matches at Big Eyes x Bigger Dreams feature one wrestler who most wrestling fans will know and another wrestler which fans might not yet know. While it is safe to say that most indie wrestling fans are familiar with Pancakes, they might not yet be as familiar with Hunter Drake. This might also though just be an introduction to both of these wrestlers for some fans and in that sense, you can expect both of these competitors to give it their all and have their names as ones that are remembered in the New Year. 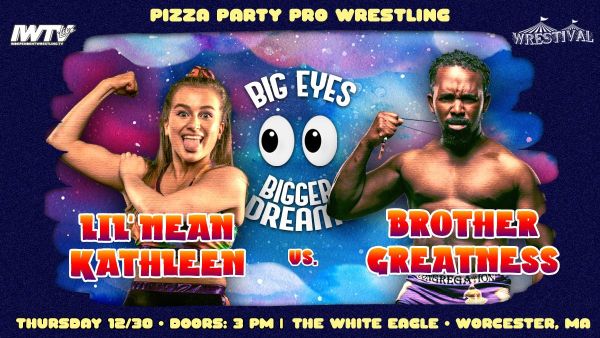 Fans at the White Eagle should already know of Lil’ Mean Kathleen (Rumor has it she lives under the ring) but they might not yet know all that which is Brother Greatness. Brother Greatness has been slowly building a following in 2021, to the point where it really feels like he could have that break-out year in 2022 and win gold. All of that could start for Greatness with this match here, but LMK will also be looking to play spoiler to that with her unpredictability and loud nature. 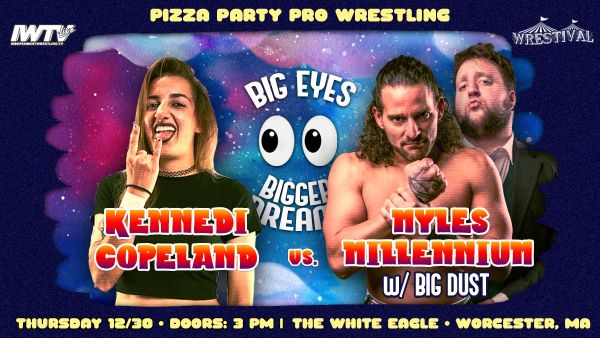 No one has been living their best life more than Kennedi Copeland in 2021. Copeland has also spent the past two Thursdays at the White Eagle (vs Davienne, then vs Megan Bayne) and so as the fans should be familiar with her in-ring work and never say die attitude, they might not be as familiar with Myles Millennium yet. This match is going to come down to who has more grit and refuses to give up. Copeland has been known for her resilience, but Millennium will be looking to leave his mark on the White Eagle and show everyone watching why is the next big star in 2022. 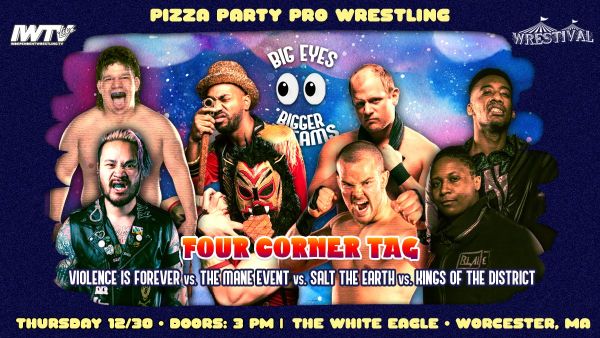 When it was announced that Violence Is Forever was back, one of the first people to speak up and ask for a match against them was one-half of the Kings Of The District: Jordan Blade. Less a question of if and more a question of how soon someone would book that match and Pizza Party Pro took up the first chance. However, they also happened to add in two other teams that could very easily play the spoiler and win this match. This is also an interesting match for this show because if you’re coming to the White Eagle, and are familiar with Beyond Wrestling, you should also know all of these teams.

If a more dangerous tag team match has ever existed, it might be replaced after this one is over. Travis Huckabee and Matt Makowski are both capable of locking on that submission hold and not letting go. The same can be said for KOD and VIF, though. Then you have Ringleader Midas or Jay Lyon flying off the top rope to break up the submission hold. This match just feels like it will always be busy and there should be at least four referees. 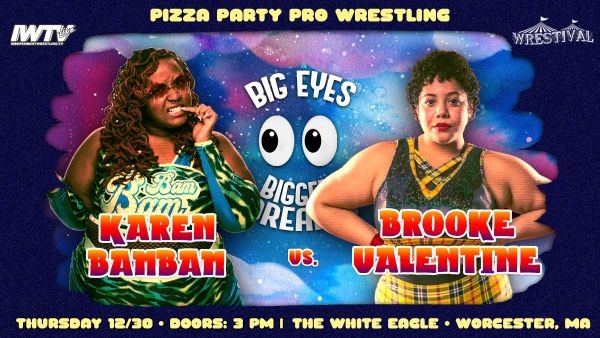 While Karen Bam Bam was originally scheduled to be in a four-way match, that was turned into LMK vs Brother Greatness. With Erica Leigh also unable to compete at Big Eyes x Bigger Dreams, this brought in the addition of Brooke Valentine to this show. Not only is it a huge upgrade that Valentine will now be in Worcester to close out 2021, but the mere fact that she is also in a match against Bam Bam is just so special.

Fans may or may not know who either of these wrestlers is, but following this match, the wrestling world should be talking about both of them. 2022 should be a huge year for both Karen Bam Bam and Brooke Valentine and this match right here will kick all of that off. In terms of matches that fans might not be talking about enough, but will definitely go above and beyond, this is that match to watch out for.

Not that long ago, Avery Good announced that there were only ten matches left on his career and this would be one of them. The mask vs mask stipulation might seem odd here as Boomer Hatfield is the only participant in this match who is masked, but the idea is that if The Outfielders lose, Hatfield must unmask. If The Outfielders win, Good must go back under the Hatfield mask for the rest of his career, regardless of how brief it might be.

The day after this show, Good will be facing Jaden Newman as part of the ACTION Wrestling/Southern Underground Pro doubleheader on The Wrestival. While it would be entertaining for graphics such as this to have to change because Good turns back into Hatfield, whether or not the promotions would go through with updating the graphics that close to the event remains to be seen. The chaos that a win by The Outfielders could cause would just be so much worth betting on them to win.

This is going to be a tough match because all four of these competitors are all too familiar with one another and in some ways, it’s for the biggest of stakes. On one hand, Boomer Hatfield unmasking would be symbolic because when Avery Good does retire, it’s as if Hatfield is also putting that piece of his career behind him. And yet, if Good loses and goes back under the mask, it does also feel fitting for him to end his career how he was- in many ways- best known: Dasher Hatfield. An image of Hatfield taking that mask off and leaving it in the ring after the final match just feels perfect.

While Pizza Party Pro has seen some changes to this card, they all feel like upgrades and with tickets at only $10 there really isn’t a better way to spend your pre-New Year’s Eve. This event will also stream live on IWTV! More information and tickets can be found here.