Fresh off the heels of an eventful Season 11 Premiere, Gatoh Move Pro Wrestling returns to Ichigaya Chocolate Square with ChocoPro #182. In fact, “eventful” may be putting matters mildly, as we will get into detail later. Nonetheless, the Gatoh Move crew isn’t one to slow down. They aim to bring some of the most unique wrestling action to viewers, which brings us to Episode #182. Here is what you should know heading into this show, set to air live from the official Gatoh Move YouTube channel. 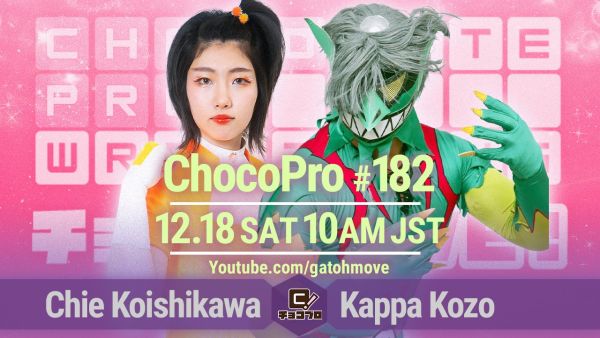 In singles action will be “Too Much Energy” Chie Koishikawa, who started Season 11 of ChocoPro on an incredibly high note. On the previous episode, Koishikawa teamed with Egg Tarts teammate Hagane Shinnou, who just so happened to celebrate a birthday on the episode. In any event, Egg Tarts were able to pick up a massive victory over TropiCalamari, the duo of Yuna Mizumori and Chris Brookes. This should give “Chiezo” invaluable motivation throughout the rest of the season. However, her next stop will be a unique one, as she steps into Ichigaya to face Kappa Kozo.

ChocoPro Season 10 viewers will undoubtedly be familiar with the mischievous “yokai” in Kappa Kozo. He had been at odds with Masahiro Takanashi and Sayaka Obihiro in particular, stepping inside Ichigaya to battle the veteran stars. As an IWA Japan star, Kozo holds the distinction of being a 2x IWA World Junior Heavyweight Champion. If there’s anyone that can counteract the energetic approach of Koishikawa, one would have to imagine it’d be Kozo. Given the hot streak that the “Endlessly Energetic” one aims to develop, a victory won’t come so easily.

Kaori Yoneyama and Masahiro Takanashi vs. Sayaka and Baliyan Akki

The main event of ChocoPro #182 features veteran wrestlers Kaori Yoneyama and Masahiro Takanashi facing off against core ChocoPro competitors Sayaka and Baliyan Akki. On the previous episode, Takanashi won a three-way match that involved Yoneyama and Sawasdee Kamen. Post-match, however, DDT Pro-Wrestling’s own Daisuke Sasaki stormed Ichigaya Chocolate Square, running Yoneyama out of the venue and attacking Takanashi and even Akki with a chair. The reigning DDT Universal Champion left carnage in his wake and it wasn’t until fellow DDT star, as well as friend and tag team partner of Takanashi, Chris Brookes intervened that Sasaki took his leave.

Following the events of the previous episode, Yoneyama and Takanashi must regroup for this upcoming tag team match. Much like Takanashi, Akki started Season 11 on a strong note, defeating Sayaka Obihiro in the opening match. Meanwhile, ChocoPro #182 marks the season debut of “The Beautiful Cosplayer,” Sayaka. There are high expectations for her, too, given that she was voted by ChocoPro fans as the MVP of Season 10. Needless to say, a victory here would set her on a path to becoming a 2x MVP. Regardless of the outcome, this main event contest should prove to be one not to miss.