Gatoh Move Pro Wrestling prepares to add another chapter to the ever-expanding book of ChocoPro with its upcoming Season 11 Premiere. ChocoPro #181 looks to hit the ground running, featuring three matches that involve both the show’s core group and a few returning stars. Season 10 ended on a high note, as well as a surprising one with the unannounced return of Lulu Pencil. Can Gatoh Move continue the momentum this week? Here’s what to know as we inch closer to the beginning of ChocoPro Season 11. 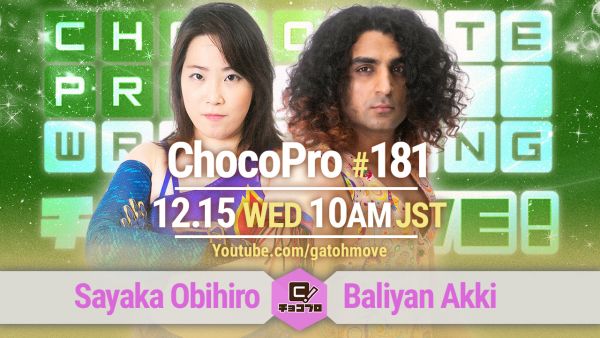 ChocoPro #181 will kick off with a singles match pitting the self-proclaimed “Ace,” Baliyan Akki, against “The Blue Heart,” Sayaka Obihiro. Akki encountered numerous obstacles throughout Season 10, many of which saw him on the losing side of matches. One can argue that he hasn’t been quite the same since his fellow Asia Dream Tag Team Champion, Mei Suruga, made her excursion to America for All Elite Wrestling. However, with “Mei-chan” recently announcing her return to Japan, perhaps Akki can get back to his winning ways. The ChocoPro Season 11 Premiere will be a major test for him.

Sayaka Obihiro had a major presence throughout Season 10 of ChocoPro, whether it was being on the hunt for Kappa Kozo or attempting to recollect herself after eating a wasabi cream puff. Throughout it all, “Obi” remained a solid pillar for Gatoh Move, especially in the absence of the company’s founder, Emi Sakura. Season 11 may very well be one where she shines, not only putting on solid matches but picking up major wins along the way. This won’t be easy, though, when battling a current Asia Dream tag team titleholder. See how this match unfolds on ChocoPro #181. 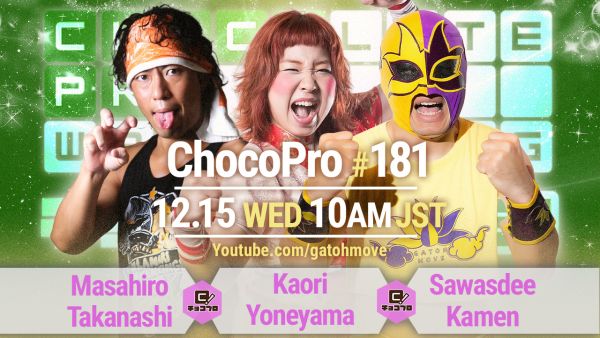 Switching things up, ChocoPro #181 will host a three-way match against three unique competitors. Masahiro Takanashi, who has been something of a chaperone in ChocoPro, has proven his dominance in the Ichigaya Chocolate Square venue. Kaori Yoneyama, a joshi veteran with experience spanning several promotions, will also be in action. One can argue that Sawasdee Kamen is a wildcard of sorts. Donning the purple and yellow of Gatoh Move, he’s often viewed as a mascot-like wrestler, though one can’t deny the possibility of him surprising everyone on this season premiere episode.

On paper, it’s easy to bet that Yoneyama will come out of this match victorious. Not only does she possess the most experience of her opponents, having wrestled since late 1999, but she’s arguably the craftier competitor to step foot in Ichigaya, utilizing trickery to pick up many of her victories. This isn’t to say that a victory is guaranteed for the 3x High Speed Champion, especially when given the experience that both Takanashi and Kamen bring to the table. Neither will make a Season 11 Premiere victory easy. Who will come out of this three-way encounter victorious?

The main event of the ChocoPro Season 11 premiere pits Egg Tarts, the duo of Chie Koishikawa and Hagane Shinnou, against Yuna Mizumori and Chris Brookes, collectively known as TropiCalamari. Though Egg Tarts, as a team, didn’t have a major presence throughout Season 10, they saw success all the same. On Episode #179, Koishikawa and Shinnou picked up a major victory over Sayaka Obihiro and Masahiro Takanashi. Egg Tarts vied for tag team gold on multiple occasions; with Season 11 upon us and Best Bros approaching their reformation, the Asia Dream Tag Team Championship may be within reach.

If there are any obstacles that stand in the way of Egg Tarts, one would assume TropiCalamari is among the most imposing. Not only is Yuna Mizumori a tag team specialist, being a multi-time Asia Dream Tag Team Champion, but Chris Brookes has seen tremendous momentum throughout 2021. His work in DDT Pro-Wrestling, where he became Extreme Champion and a 2x Ironman Heavymetalweight Champion this year, speaks for itself. Standing at 6’4”, he remains among the most dominant competitors in Ichigaya. Popped flamingo floats and all, can he reunite with “Yunamon” and kick off ChocoPro Season 11 with a win? Tune in to find out.