On ChocoPro #180, another season comes to a conclusion. This has been an eventful one, to say the least, whether it was in regard to the departure of core Gatoh Move Pro Wrestling competitors or the absence of its Super Asia Champion. The company experienced a number of obstacles this season, but through them all, the men and women behind it persevered. Season 10 will be a time to celebrate. More importantly, it marks the final showcase of the season. Let’s take a closer look at the action to come. 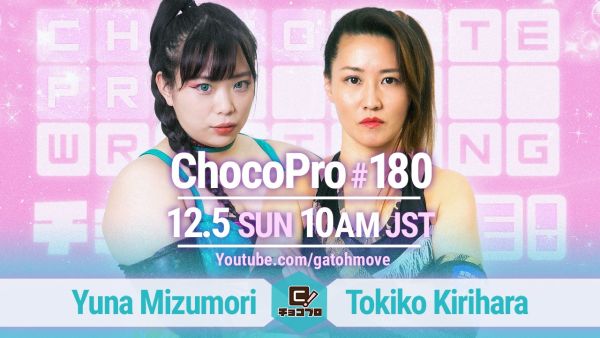 In one of the preliminary matches of ChocoPro #180, Yuna Mizumori and Tokiko Kirihara will square off in their second singles encounter of 2021. For those that follow DDT Pro-Wrestling, specifically Ganbare Pro, you may have seen these two square off in September. Despite a solid effort from “Otoki-san,” it was “Tropical Yahho” herself, Mizumori, that came away with the victory. Furthermore, Mizumori and Kirihara have experience as tag team partners, besting Chie Koishikawa and Sayaka Obihiro on Episode #177 late last month. When paired off, their combined styles make for an undeniable hybrid. However, when they square off, it’s fair to expect nothing but the most competitive of encounters. Who will be the one to wrap up Season 10 of ChocoPro with a victory? Can “Yunamon” rack up another win or can the mistress of the “Comaneci” pull off an upset victory over her wrestling superior? 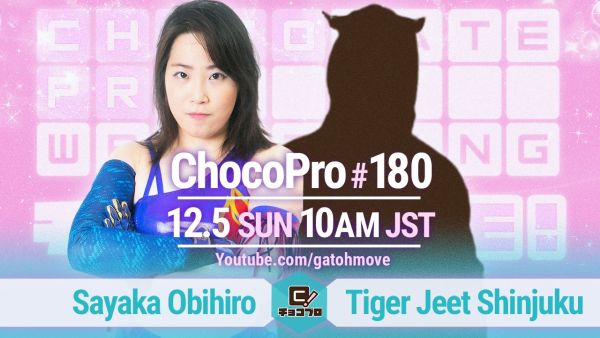 ChocoPro #180 will also feature “The Blue Heart” herself, Sayaka Obihiro, who’s had an undeniable presence in Season 10. Her veteran status can’t be denied and the same can be said about her bell-to-bell ability. She’s also no stranger to more peculiar match-ups, ranging from encounters with Kappa Kozo to losing a bout by eating a wasabi-filled cream puff. On the Season 10 Finale, “Obi-san” takes on the mysterious Tiger Jeet Shinjuku. The theory is that this individual actually goes by multiple aliases throughout wrestling, though this can’t be easily confirmed or denied. One thing that’s for certain, however, is that Obihiro’s time in Season 10 is likely to end on an unorthodox note. Keep an eye on this match, as it’s unknown what will transpire once the bell rings.

ChocoPro Season 10 will either end on a high note or result in a devastating conclusion for Sayaka. Over the course of Season 10, Gatoh Move’s “Beautiful Cosplayer” has come into her own. Over time, she adopted a stiffer, more hard-hitting approach. Additionally, she donned brand new gear all her own. It would seem that she is on the cusp of greater things, not only in Gatoh Move but professional wrestling itself. ChocoPro #180 will be one of her biggest tests to date, however, as she goes head-to-head with the returning Rina Yamashita. This past November, the elephant mask-wearing deathmatch specialist wrapped up a United States tour. She made her Game Changer Wrestling debut at GCW Evil Deeds before participating in the Nick Gage Invitational 6 tournament. Needless to say, Yamashita is reentering Ichigaya Chocolate Square a more seasoned competitor, which will make her that much more of a challenge against the up-and-coming Sayaka. 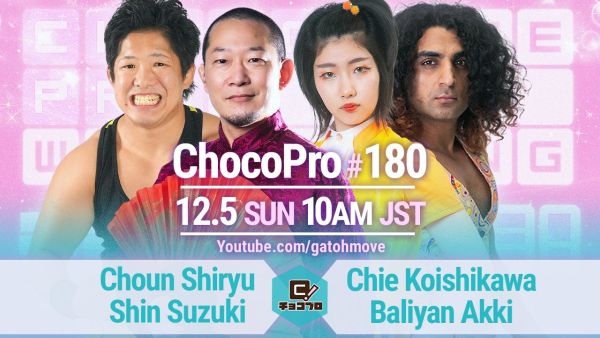 Mixing things up with tag team action, the ChocoPro Season 10 finale sees the interim Super Asia Champion team up with a Pro Wrestling HEAT-UP star to battle two core Gatoh Move competitors. Chon Shiryu has been nigh unstoppable since being crowned the interim titleholder in Minoru Fujita’s absence. Since then, he’s committed to his performances in Ichigaya. Though they were unable to square off in Season 10 to decide an undisputed champion, expect Shiryu and Fujita to meet come Season 11. On ChocoPro #180, Shiryu teams with HEAT-UP’s Shin Suzuki to take on the duo of Chie Koishikawa and Baliyan Akki. The latter of these opponents has found himself in an unusual slump. Season 10 hasn’t been kind to Akki, as the self-proclaimed “Ace” of ChocoPro many of his matches in the familiar venue. Season 11 could signal a change, however, and a tag team victory on this episode would be a great way to begin.