Since the company’s return from the pandemic in May of this year, Blitzkrieg! Pro has been putting on some of the most unique and interesting shows of any promotion worldwide. This will continue when Mark It Zero closes out the year, not with a whimper but with a bang!

One of the most intriguing aspects of Mark It Zero is an Open Challenge being placed by JGeorge. The fact that this could be answered by a B!P roster member or possibly an outsider is what makes it so appealing. On one hand, Mark Sterling has been announced for this show, so “Smart Mark” answering this Open Challenge would seem obvious (and make for a great match) But there are also other Blitzkrieg! regulars who could seemingly just as easily appear; Slade, for example, is big name from outside of the B!P regular roster. Other roster members might also be open to speculation, but whatever the answer is, JGeorge might be in over his head on this one! 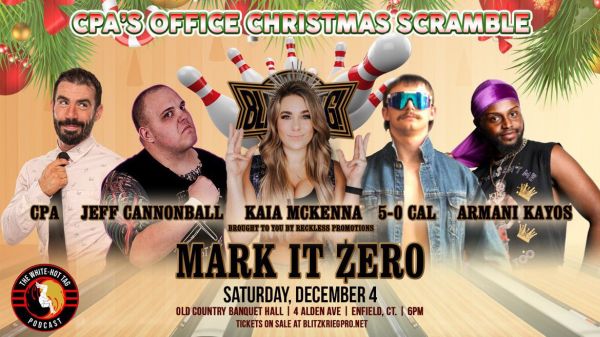 It wouldn’t be a Blitzkrieg! Pro show without a scramble match and CPA is giving us this Office Christmas Scramble Match as a present for paying our taxes this year. Each of these competitors brings something different to the table. The experience and deathmatch style of Jeff Cannonball will be interesting to see clash with the more technical good witch skills of Kaia McKenna. 50 Cal is the newcomer here, but picking up this win could make him feel like less of a newcomer next year. Armani Kayos is also still relatively new to wrestling, but the certain style he brings will be a lot of fun in this scramble match. Odds are that CPA wouldn’t have booked an opponent he didn’t feel like he could beat, but can he overcome the numbers game? 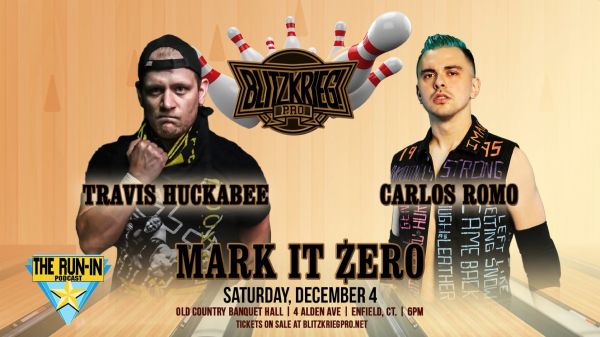 At Fall Children, Travis Huckabee called out JTG, who ended up being otherwise booked for this date. Now, Carlos Romo returns to the United States- his third stop on the tour- and will face someone who was hoping to get some revenge on JTG. This might be bad news for Romo because Huckabee might take out those frustrations of not getting to face JTG on Romo. At the same time, Huckabee could take his eyes off the prize, allowing Romo to capture the win. Regardless, this one promises to be a great technical wrestling match! 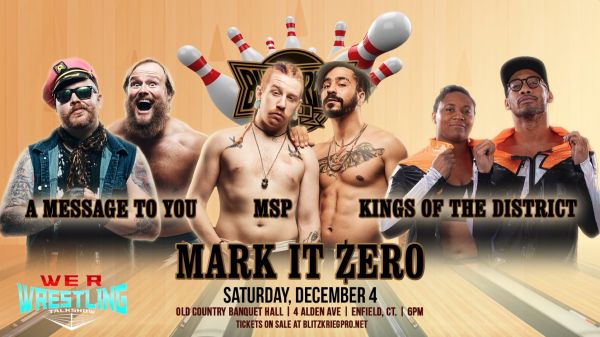 A Message To You vs MSP vs Kings Of The District

It was confirmed via Twitter that Aiden Aggro would not be able to compete in this match, and as such, MSP is likely being pulled from it on the whole. The fate of the match has not yet been revealed, though it is possible for DangerKid to find a suitable partner for one night only (Alexander Lee, perhaps?) or this could just become a two on two tag team match with A Message To You vs Kings Of The District. Either way, the four powers of Perry Von Vicious, Leary, Eel O’Neal, and Jordan Blade would all combine to create something special. This match will be hard-hitting, with bodies flying around the ring, no matter who ends up being involved. 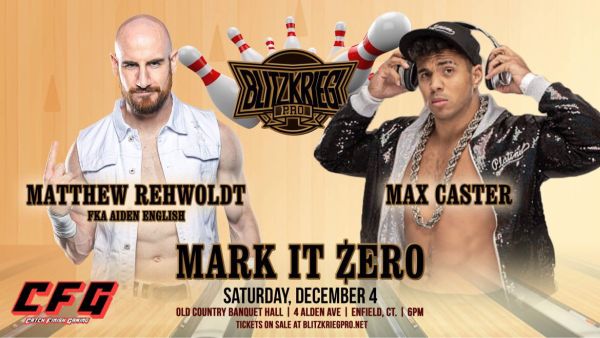 While most wrestling fans might remember Matthew Rehwoldt from his time in WWE, he is currently a member of the IMPACT Wrestling roster, which makes this feel all that more important because it is an All Elite Wrestling vs IMPACT type of match. Max Caster has been on an absolute roll lately- in both AEW and outside of it- so it should come as no surprise that he would be put up against one of the best-kept secrets in wrestling, someone looking to make their mark outside of WWE. This match should be a great showcase of skills for Rehwoldt, a re-introduction to fans in some ways, but also the pure talent of Caster should not be overlooked. The Max Caster diss rap at Mark It Zero, which will likely mention The Vaudevillains, should also be on point. 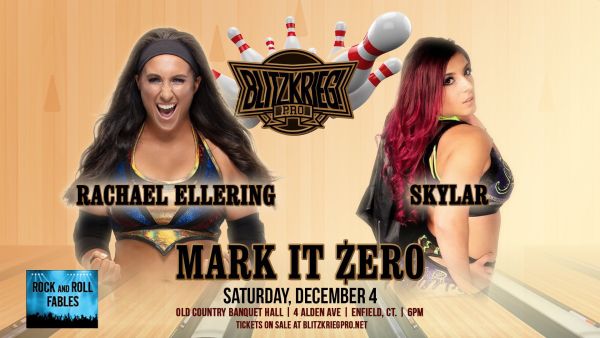 If you are a woman in professional wrestling, and you wish to wrestle the best, it can be argued that the place to do that is IMPACT Wrestling and their Knockouts Division. Rachael Ellering has certainly been making a name for herself in IMPACT and, in 2022, she seems positioned for a huge year where her name is universally known. Having Ellering in Blitzkrieg! Pro feels special and the fact that she is also going to be facing one of the Blitzkrieg! originals (and one of the best wrestlers out there today) in Skylar just screams match of the year. Skylar, who was recently in Major League Wrestling with Davienne, should bring out the best in Rachael Ellering and this is just going to become one of those classic matches looked back upon fondly.

All four of these competitors in this match who are not the current Bedlam Champion had to win qualifying matches in order to make it here. This match would be wild enough on its own just with these wrestlers in it, but adding ladders to the equation just seems to make it that much more dangerous. Aaron Rourke has been on a hot streak lately, so this could possibly be a match that favors him. King Crab has also been doing some wonderful things within Blitzkrieg! Pro this year and having the speed/high-flying advantage could be what wins King Crab this match. Devantes simply has the power and Cypher by his side, while VSK is perhaps the best overall wrestler in this match. But Bobby Orlando is the current Bedlam Champion and these types of matches seem to favor the current champion. He may wish to let everyone else fight and cash in on the appropriate moment to win. This will be an exciting match which, if you blink, you might miss something. This will undoubtedly be the truest form of mayhem and destruction.

Mark It Zero will also feature a live meet and greet with Danhausen! Danhausen was going to wrestle but is injured so bring Danhausen sacks of money to help with his injury!

This all goes down on December 4, 2021 in Enfield, CT. Tickets and more information can be found here: https://blitzkriegpro.net/