Heading into the weekend, Gatoh Move Pro Wrestling comes to fans with a two-match card for ChocoPro #173. This show can best be described as a tag team double feature, pitting a number of teams against one another in the familiar venue of Ichigaya Chocolate Square. The past few episodes have been nothing short of intense, especially with the Super Asia Championship taking center stage. On this show, the focus is entirely on tag team competition. Here is what to know heading into this show. 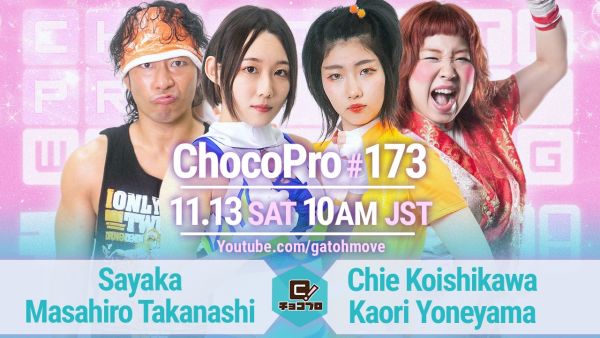 Sayaka and Masahiro Takanashi vs. Chie Koishikawa and Kaori Yoneyama

First up, on ChocoPro #173, is a tag team contest pitting the budding Sayaka and veteran Masahiro Takanashi against Chie Koishikawa and Kaori Yoneyama, another up-and-comer and seasoned wrestler tandem. This episode marks the first time that Sayaka and Takanashi have ever teamed up in a standard tag team contest. Gatoh Move’s “Beautiful Cosplayer” did face the beer-loving “Drunken King” on ChocoPro #150 this past September; in this match, the latter picked up the victory. Now, the two competitors find themselves on the same side, facing off against a team that will be just as hungry as them.

Chie Koishikawa and Kaori Yoneyama are no strangers to one another in Gatoh Move. They have competed against each other multiple times, since November of last year, both in singles or tag team competition. Though “Chiezo” always gave these efforts their all, she has been unable to thwart the wily Yoneyama. One thing is for certain, however: when this joshi legend steps into Ichigaya, there’s no telling what will happen next. Will Yoneyama use the various “weapons” of Ichigaya to her advantage? Will she channel the energy of Fukigen Death? Tune into the official Gatoh Move YouTube channel to see how this contest unfolds.

Also on ChocoPro #173, Black Comaneci will reunite. The trickster tag team of Tokiko Kirihara and Antonio Honda last teamed up on Episode #163 last month, when they fell to Best Bros in a non-title contest. Since then, both members of Black Comaneci have been busy in their own ways. Case and point, it was only last month that Kirihara teamed with Yuna Mizumori to participate in the SEAdLINNNG’s tournament to crown new contenders for the Beyond the Sea Tag Team Championship. Meanwhile, the bulk of Honda’s time has been committed to DDT Pro-Wrestling, where he recently regained the KO-D 8-Man Tag Team Championship.

Black Comaneci’s return match will be a big one, as they’re set to take on Sayaka Obihiro and one-half of the Asia Dream Tag Team Champions, Baliyan Akki. Since Mei Suruga’s recent excursion to America, regularly appearing on AEW Dark and Dark: Elevation, Akki has been, for the most part, flying solo. This has been evidenced by his attempts to win the Super Asia Championship in titleholder Minoru Fujita’s absence. On ChocoPro #173, he teams with Sayaka Obihiro, who Akki stated was his first friend in Japan. The two grew closer, initial language barriers and all, which speaks to the sentimentality of this particular duo. See how they fare against Black Comaneci on this upcoming show.