Last time on ChocoPro, the Gatoh Move Pro Wrestling crew celebrated the birthday of Chris Brookes. However, the good times are ongoing, as the crew is set to honor the fourth generation of Gatoh Move stars during their 2-year wrestling anniversaries. For those that don’t know, the group of Sayaka, Rin Rin, – who recently stepped away from wrestling – Sayuri, Tokiko Kirihara, Chie Koishikawa, and Lulu Pencil, who is currently on excursion in America with Emi Sakura, all debuted in August of 2019. Since then, this crew went on to become refined wrestlers, developing unique characters and in-ring approaches. On ChocoPro #148, we celebrate them as they head into Year Two of their respective wrestling careers. Here’s what to know ahead of the “4th Generation 2nd Summer” show. 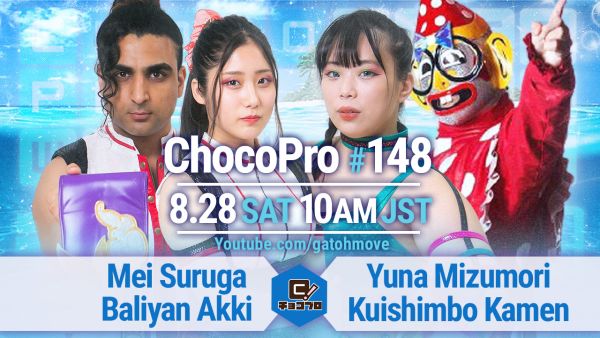 Not often are one or both members of Best Bros in preliminary action on ChocoPro. On episode #148, Mei Suruga and Baliyan Akki will be ringing in the action. The reigning Asia Dream Tag Team Champions will be in action against the colorful team of Yuna Mizumori and Kuishinbo Kamen. “Yunamon” needs no introduction to longtime ChocoPro viewers, as she’s every bit as powerful as she is colorful. Teaming with Gatoh Move’s “Pineapple Fairy” will be the snack-loving clown, Kuishinbo Kamen. His previous ChocoPro appearance dates back to this past March; on Day Two of ChocoPro #100, he teamed with the elderly Gabai Ji-chan in a winning effort over Emi Sakura and Lulu Pencil of Pencil Army. ChocoPro #148 marks the first time Mizumori and Kamen will team up, posing a unique challenge for Best Bros. 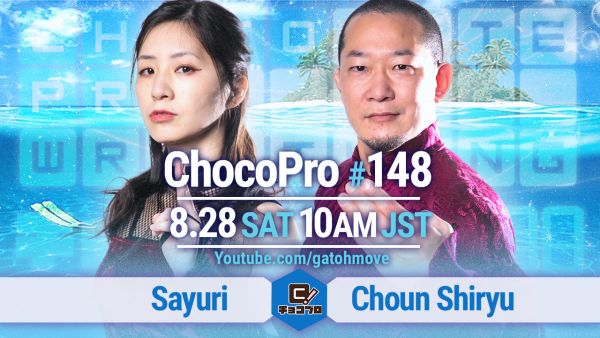 In the first match featuring a Gatoh Move fourth-generation wrestler, Sayuri will be celebrating by taking on her tag team partner, Chon Shiryu. They started teaming regularly back in March, forming the team known as Dragon Ninja. Sayuri’s ninja-like approach and Shiryu’s kung fu offense have made them one of the teams to watch in ChocoPro. Though they have seen their highs and lows, failing to score in the One of a Kind Tag League being a prime example of the latter, the duo has remained steadfast. On ChocoPro #148, Sayuri will step up to perhaps her greatest challenge in not only her partner but a mentor figure as well. Their previous singles match took place all the way back in October of 2020, when Shiryu bested his young peer on episode #55. Can Gatoh Move’s “Kunoichi” show how much she’s grown with a singles victory? 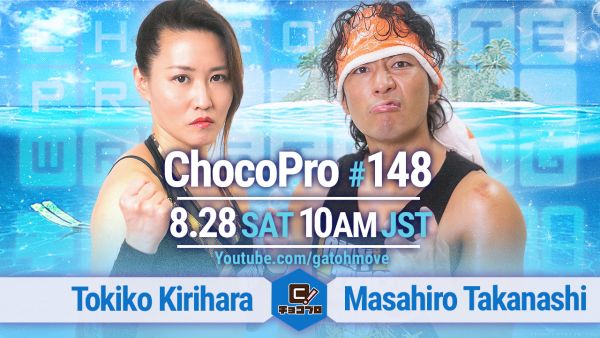 Heading into ChocoPro #148, Masahiro Takanashi noticed that Tokiko Kirihara, also known as “Otoki-san,” didn’t have an opponent for the show. In response to this, Takanashi declared himself her opponent, which will make for another great physical challenge for Kirihara. Of course, anyone that has watched ChocoPro on a regular basis will attest to the notion that physical challenges aren’t foreign to her. Case and point, on the previous episode, she battled Hagane Shinnou in what many fans predicted would be a hard-hitting affair. Said fans weren’t disappointed, and though Shiryu emerged victorious, “Otoki” didn’t make it easy for him. To celebrate her second year in professional wrestling, Kirihara will take on the man that “Only Lives Twice,” Takanashi. Regarded as a man who will serve any role in ChocoPro, Takanashi battling Kirihara will be his next big challenge.

The main event of ChocoPro #148 will appropriately see two fourth-generation stars squaring off in singles competition. One of the reasons why this main event is so intriguing is the contrast of personalities involved. Compared to the trademark energetic approach of Chie Koishikawa, Sayaka is more understated, being more soft-spoken by comparison. This isn’t to say that Gatoh Move’s “Beautiful Cosplayer” is a pushover, as her hard-hitting offense will attest. Boasting lethal chops and “Endless Energy,” Koishikawa isn’t a slouch from bell to bell, either.

Koishikawa and Sayaka worked in tag team matches in the past. However, this is the first time that they will square off in singles action. Both wrestlers have reached their second year in the business, so it goes without saying that a victory will be important for both. Expect Koishikawa and Sayaka alike to leave everything they have on the brown mat of Ichigaya Chocolate Square. What awaits both fourth-generation stars remains to be seen.