This Saturday, the National Wrestling Alliance aims to make history with NWA EmPowerrr. This event was announced in June, when Billy Corgan and Mickie James opened NWA Powerrr. They declared that the promotion would hold its first all-women’s event. Furthermore, this would be more than a showcase of the NWA women’s division; it would be a celebration for women’s wrestling around the world. In addition to NWA talent, women’s wrestlers from IMPACT Wrestling and All Elite Wrestling have been confirmed. From championship matches to a women’s invitational to the revival of tag team titles, the excitement level couldn’t be higher.

NWA EmPowerrr will take place in the Khorassan Ballroom, located in Chase Park Plaza in St. Louis, Missouri. This marks the first time that an NWA event has been held outside of Georgia since the Crockett Cup event in April of 2019. For fans of women’s wrestling, as well as the art of wrestling itself, EmPowerrr has the makings of a promising show. Here’s what to expect. 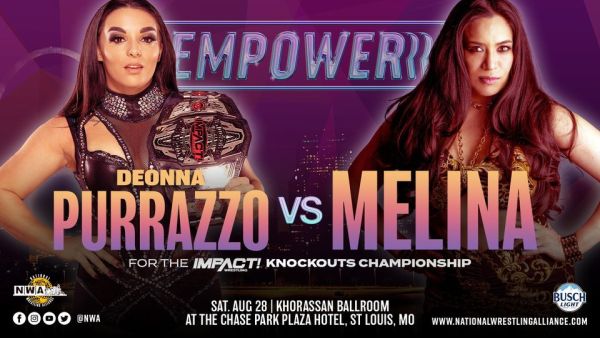 The Virtuosa Meets a Living Legend

2x IMPACT Knockouts Champion Deonna Purrazzo has been nothing short of dominant. In her second reign, which began this past November at Turning Point, Purrazzo has overcome the best that IMPACT Wrestling has placed in front of her. Victories over the likes of Rosemary, ODB, Thunder Rosa, and Jazz are collective evidence of “The Virtuousa’s” credibility. In fact, her victory over Jazz at Hardcore Justice back in April showed that Purrazzo isn’t shy about stepping up to veterans of the game. Mickie James recognized this, personally inviting the IMPACT Knockouts Champion to compete at NWA EmPowerrr. Furthermore, James had the right opponent in mind: the self-proclaimed “Living Legend” herself, Melina.

Competing primarily in the NWA, Melina’s track record speaks for itself. In WWE alone, she is a 5x titleholder, having won the Divas Championship twice and the Women’s Championship thrice. On the independent scene, Melina has held gold, including for Southside Wrestling Entertainment and Warriors of Wrestling. Simply put, if anyone knows anything about being a champion, it’s her. Moreover, Melina boasts roughly 2 decades of wrestling experience. In theory, this gives her an edge heading into NWA EmPowerrr. As stated earlier, though, “The Virtuosa” has been dominant as champion. Expect this to be a competitive encounter. 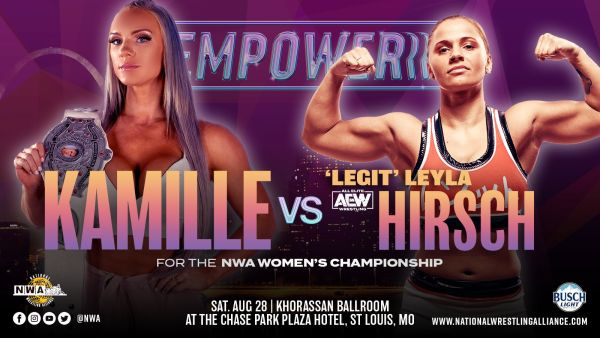 Originally, Kamille was slated to defend the NWA World Women’s Championship against former titleholder Serena Deeb at NWA EmPowerrr. However, with Deeb having to step away due to a knee injury, a new contender had to be made. The National Wrestling Alliance opened this up to All Elite Wrestling. Earlier this month, on AEW Dynamite: Homecoming, “Legit” Leyla Hirsch defeated The Bunny in an eliminator match. With this victory, Hirsch punched her ticket to EmPowerrr. Kamille, who was in attendance on this night, stepped in the ring to stand toe-to-toe with her new opponent. Having only been wrestling for a few years, this is arguably the “Legit” AEW star’s biggest challenge to date.

This isn’t to say that Hirsch is an unfit contender. On the contrary, she has proven herself as a formidable wrestler everywhere from Combat Zone Wrestling to World Wonder Ring Stardom. Standing at 4’11”, Hirsch makes up for size with a lethal combination of technical wrestling and submission expertise. With that said, the 5’10” Kamille remains undefeated in the NWA, having captured their women’s title at When Our Shadows Fall in June. The confident, powerful “Brickhouse” has been itching for new challengers and the scrappy Hirsch is among the most viable. Will Hirsch taste championship gold for the first time at NWA EmPowerrr or will Kamille’s reign of dominance continue? Regardless of the outcome, the NWA World Women’s Champion will defend her title at NWA 73 the evening after against the winner of the Women’s Invitational Cup.

Rules of the 1st EVER @nwa #WomensInvitational are simple.

10 women have been selected by myself & my team of advisors. The #Top10 Women we think would & could make incredible #WomensChampions to compete in the #MainEvent of #EMPOWERRR to become not only the #1st cup holder

One of the main attractions scheduled for NWA EmPowerrr is the Women’s Invitational Cup. Featuring 10 of the “best up-and-coming female talent in the world,” this is a 10-woman gauntlet-style match. The rules are as follows: 2 competitors start the match. Every 2 minutes, a new entrant will join until all 10 competitors are in action. A wrestler can only be eliminated by pinfall or submission. This match will be an endurance, to be certain, but the prize is nothing short of worthwhile. As mentioned earlier, the last woman standing in the Women’s Invitational Cup will face the NWA World Women’s Champion at NWA 73 the following night.

Since the NWA Women’s Invitational Cup was announced, the National Wrestling Alliance slowly trickled out competitor reveals. Names such as Lady Frost and Jennacide should be familiar to recent NWA viewers. However, the promotion was able to look beyond its parameters and find women’s wrestlers of various backgrounds and experience levels. Debbie Malenko, for example, was active during the early 1990s, particularly for All Japan Women’s Pro-Wrestling, until a leg injury in 1993 cut her career short. Over the last few months, however, Malenko has made a resurgence. Her veteran status makes the Women’s Invitational Cup all the more exciting.

The NWA Women’s Invitational Cup also features a few well-known names in today’s wrestling scene. Chief among them is Chelsea Green, who is best known for her current IMPACT Wrestling run. “The Hot Mess” has slowly but surely been working her way back up the ladder, and in terms of women’s wrestling, there are few platforms as prominent as NWA EmPowerrr. Whether it’s Kamille or “Legit” Leyla Hirsch, the winner of the invitational will go on to challenge for the World Women’s title the following night. Keep an eye on this multi-woman encounter.

Stay tuned to the Last Word on Pro Wrestling for more on this and other stories from around the world of wrestling, as they develop. You can always count on LWOPW to be on top of the major news in the wrestling world, as well as to provide you with analysis, previews, videos, interviews, and editorials on the wrestling world. NWA EmPowerrr can be seen on FITE this Saturday at 8 PM EST. Tickets for the event are available via Ticketmaster.