All Elite Wrestling returns to the place they called home for so long on this week’s AEW Dynamite special dubbed “AEW Dynamite: Homecoming”. The Homebase known as Daily’s Place will once again be rocking with some exciting wrestling action. The TNT Championship will be on the line as the self-proclaimed favorite son of the almighty defends his title against one of the most dynamic young stars AEW has on their roster. “Le Champion” rekindles a rivalry from decades ago as he faces another labor in front of him. Also, we have a match that could prove to be a nightmare for “The Prince of Pro Wrestling”. What a start to August this will be for AEW. Because, “It’s Wednesday night, and you know what that means!” it’s time for some Dynamite. Let’s run it down.

Tune in LIVE at 8/7c on @tntdrama pic.twitter.com/euuoHwIKSG

The Juice Is Back 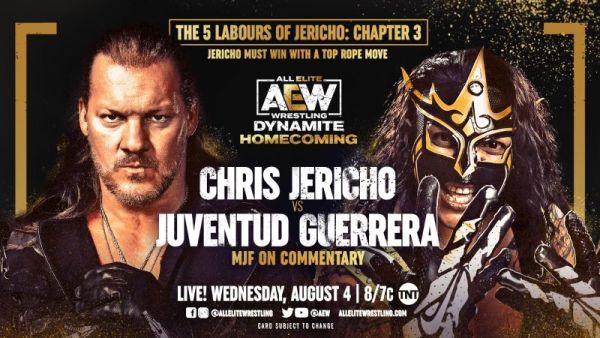 Labor number three for one Chris Jericho is waiting for him come Wednesday night. As he faces one of his fiercest and greatest rivals, the debuting legendary luchador Juventud Guerrera. These two had some battles back in their days in World Championship Wrestling and they look to cultivate another classic on this special edition of Dynamite. Jericho barely survived his “No Rules Match” against the “Deathmatch King” Nick Gage last week at Fight For The Fallen. This just goes to show that MJF is not playing around. From here on out, if Chris manages to survive this third labor, it will not be an easy road to get his mitts on Maxwell Jacob Friedman once again. It just makes one wonder if Chris Jericho is running on empty.

Not only does Jericho face Juvi on Dynamite this week, but also, he needs to win the match with a top rope maneuver to pass this arduous test. “The Salt of the Earth” will stop at nothing and will continuously stack the deck against Jericho if it means putting an end to Chris’s aspirations of battling him one more time. Chris Jericho has gone this far in the “Five Labours” and you just know he won’t stop now as he is so close to getting his revenge. Time to hop on the Wayback machine as this match could prove to be the blast from the past we never knew we wanted. Will Juventud Guerrera stop the “Demo God” dead in his tracks or will Chris Jericho vanquish the masked luchador and accomplish his third labor?

The dark enigmatic being known as Malakai Black will finally make his highly-anticipated AEW in-ring debut this Wednesday night at Homecoming. And, he will be facing “The American Nightmare” Cody Rhodes in a tension-filled match that has probably already reached its boiling point before they ever even square up in the ring. Black made his presence felt in a big way back at Road Rager.

His first victim; Arn Anderson. This was a clear message to arouse the attention of Cody. Malakai Black is out to get the franchise player and he needed him to notice. Malakai wants to put the “Golden Boy” out to pasture and takeover. So, in his words, he did what he did to send a statement to Rhodes himself. Cody was livid at the fact that Malakai would stoop to such lows as knocking the lights out of a 62-year old man to make a point.

Cody Rhodes will not stand for this and most likely will be filled with anger and passion come Wednesday night. Though, he must be careful as Malakai Black is one of the most dangerous and unpredictable competitors wrestling has right now. Black could end a match in a split second andput Rhodes in a never-ending black mass of pain come AEW Dynamite: Homecoming. But, if anyone knows a thing about Cody, he never backs down regardless of who stands across from him. Wednesday night will be a massive showcase and this bout stands out from the rest. Will Cody Rhodes avenge his mentor or will Malakai Black reign down on “The Prince Of Pro Wrestling”?