Though it isn’t until August 24, Chris Brookes and the Gatoh Move Pro Wrestling will be celebrating his birthday early on ChocoPro #147. To ring in the occasion, Brookes will be reuniting with an old friend and tag team partner to take on an energetic tandem; one member of said tandem just so happens to be a rival of Brookes’s in Gatoh Move. All of this, and more, is set for this upcoming episode of ChocoPro. Are you looking to tune into the Gatoh Move YouTube channel to watch? If so, get caught up to speed with the following rundown. 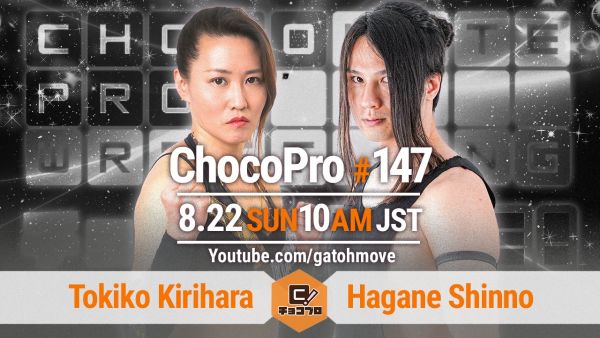 In what promises to be a hard-hitting affair, in which both opponents will take each other to the limit, Tokiko Kirihara will square off with Hagane Shinnou. On the previous episode of ChocoPro, Masahiro Takanashi announced that he would be facing Kirihara next weekend; during this time, the fourth generation of Gatoh Move stars will be celebrating their second year anniversaries in wrestling. Prior to this, however, “Otoki-san” battles one-half of Egg Tarts in Shinnou. As his tag team partner competes in the main event, Shinnou will more than have his hands full. Kirihara and Shinnou boast similar wrestling approaches. It’s also worth noting that this is their first singles match in a year. Regardless of who wins, expect the victor to come away with considerable soreness. 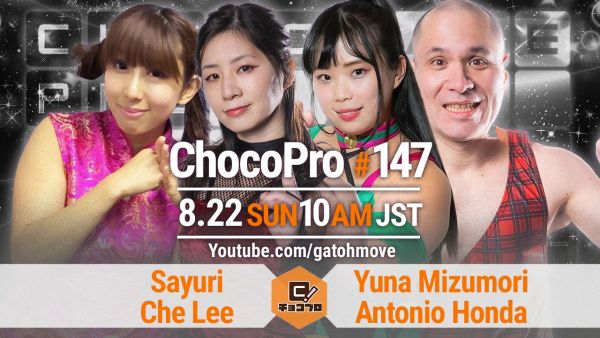 Sayuri and Che Lee vs. Yuna Mizumori and Antonio Honda

In the second match of ChocoPro #147, Yuna Mizumori and Antonio Honda join forces once again. The last time “The Pineapple Girl” teamed with the melodious spoiler of Gatoh Move was back in January of 2020, when Honda teamed with TropiKawaild in a six-person tag team match to defeat Rin Rin, Masahiro Takanashi, and Emi Sakura. Now, over one year and a half later, Mizumori and Honda are on the same side of Ichigaya. Their opponents are Sayuri and the familiar-looking Che Lee. Chon Shiryu was intended to be part of ChocoPro #147, but due to various circumstances, the “Dragon” half of Dragon Ninja was unable to make it. Thus, he sent Che Lee, a women’s wrestler he knew, in his stead. Though this “newcomer” may seem familiar to joshi puroresu enthusiasts, it’ll be stressed that she’s an entirely different entity.

In the main event of ChocoPro #147, Calamari Drunken Kings reunite to take on the exuberant, mischievous tag team known affectionately as Warm Caterpillars. For those that are unfamiliar with CDK, this is a team that consists of Chris Brookes and Masahiro Takanashi. They have been teaming together for a number of years, both in Gatoh Move and elsewhere. They have remained friends over the years, even as they took separate paths in their wrestling careers. On this episode, they team together for the first time in ChocoPro history. Their opponents will be no pushovers, however, as they battle Mei Suruga and Chie Koishikawa, collectively known as Warm Caterpillars.

The last time that Mei Suruga and Chie Koishikawa teamed resulted in a victory. On ChocoPro #145, they took on Dragon Ninja, the illusionary, disciplined duo of Sayuri and Chon Shiryu. Despite a valiant effort from Dragon Ninja, “Mei-chan” and her ally with “Too Much Energy” secured the victory. Though Suruga’s tag team efforts are often associated with Baliyan Akki – Best Bros are the current Asia Dream Tag Team Champions, after all – Gatoh Move’s “Apple Girl” has proven that she can work well with a variety of opponents. Koishikawa is no exception, especially as she expressed her hopes and dreams for ChocoPro season 9. If CDK intends on making this episode a win, they will have to be at the top of their game.

More than anything else, ChocoPro #147 is a celebration of Chris Brookes en route to his birthday. Regarded by many viewers as the biggest villain to step foot into Ichigaya Chocolate Square, Brookes is as confident as he is dominant. Whether he’s engaged in a grudge match with Suruga or locked in a fierce feud with Lulu Pencil, his matches and stories have been among the most entertaining. It’s unknown what to expect on this episode of ChocoPro. Nonetheless, it will be a time of celebration.