Tag team wrestling is a completely different style than regular singles wrestling. It takes two men to do the work of one in hopes of becoming champions time and time again. And many times in history, two unlikely wrestlers come together to become a tag team worth telling a story about. Whether it be following a feud by gaining respect for each other, being forced together by an authority figure, or having a common goal, this is a tale as old as time in the world of professional wrestling. The Rock ‘n’ Sock Connection is one of the best examples of this as The Rock resisted, but he and Mankind are remembered forever for what they did together as an oddball tag team. That being said, this feature focuses on one of the most underrated tag teams in WWE history: The Bar.

Sheamus and Cesaro never made sense as a tag team prior to then Raw General Manager Mick Foley forming a plan to get them to see each other as one. After all, Sheamus was a four-time world champion by then and had never been in any form of tag team. The only part of his career that came close to anything resembling a team was when he was the leader of the shortly-tenured stable, League of Nations. Nothing ever really connected there and it was a sense of what is left for Sheamus to do for the company. Cesaro, on the other hand, had been two years removed from his tag team championship run with Tyson Kidd. He had been middling for the most part and had no real direction. Sometimes the stars align to make something very special out of nothing.

The seven-match series would drive these two together.

The first WWE Draft in years led to a number of unique feuds for both Raw and SmackDown LIVE at the time. However, one of the most long-term and notable would be that of Sheamus and Cesaro. These two men were the last televised selections of the draft that year, forcing them both to try and prove something. There was no better way to do that than against each other. Cesaro took advantage by beating Sheamus and turning that into a United States Championship. Angered and not forgiving of his losses, Sheamus didn’t allow Cesaro to win the championship. Seeing that they were the last two picks, neither man was happy about being on Raw. Cesaro even said on television that he would be better off over on SmackDown LIVE. That led Mick Foley to give them the perfect opportunity.

A Seven-Match Series beginning at SummerSlam. The winner of the series between the two would get a title shot at whatever the winner wanted. A welcoming result at the end of what would be a physical series, neither man backed down but welcomed the challenge. What was interesting about this was that Sheamus was in the slump of his career. He needed this more than anyone.  “The Celtic Warrior” managed to get the first three wins of the series, going up 3-0. The first win came five years ago on the SummerSlam Kickoff show and the next two came on episodes of Monday Night Raw. The often resilient Cesaro didn’t let this discourage him, however, as he turned it around to tie the series with one at a live event and the other two on episodes of Raw.

Sheamus was flustered, angry, and stunned at the fact that he had blown his 3-0 lead and they were going to a seventh matchup. At Clash of Champions, these two brutalized each other. After so many hard hits on each other throughout the series, the match would end in a no contest between the two top tough guys of WWE. It left everyone wondering what would happen with their series as it seemed all for naught.

Coming Together To Set The Bar 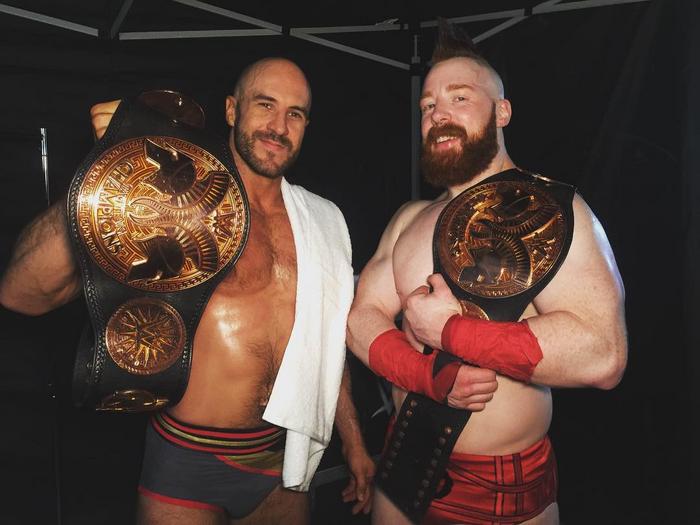 To say that these two came together instantly would be a complete lie. They didn’t work well at all together for a bit there. The chemistry was non-existent and animosity was strong. After all, Sheamus and Cesaro just spent a couple of months beating each other up non-stop. It took time. In their first-ever championship match, they won via disqualification over The New Day.  They were beginning to show signs they could do this, but in their rematch, they failed and looked to be taking a step back. Nothing was bringing these two together but instead, they felt more distant and distant as a tag team. It was taking time for them to figure each other out and wasn’t until a bar fight that they were on the same page for the first time ever. They cleared everyone out who got into their faces and were sharing a tall glass by the end of it.

It is always something out of the ordinary that brings certain teams together and showing that they had one another’s back in a fight gave them the confidence to move forward as a team. At Tribute To The Troops, Sheamus and Cesaro earned another shot at the WWE Tag Team Championships. Five days later, they would head to Roadblock: End of the Line and shock the world. Sheamus and Cesaro brought out the best as a team than they ever had before, defeating the longest reigning tag team champions in the history of WWE, The New Day, to end what was a historic run as champions. Little did everyone know that this was only the beginning for Sheamus and Cesaro, who would later establish that after coming together in a bar fight, they were not raising the bar. They were The Bar. Wrestling can be really weird, but this tag team proved to be one of the best in WWE history by their time was over as a tag team.

You can never be too sure as to how teams, wrestlers, or matches are seen in WWE history. When it comes to the team aspect, most fans will give The New Day and The Usos the treatment as if they are the teams that have joined the elite of the elite in history. They are right by the side of teams like Edge and Christian, The Dudley’s, and The Hardy Boyz. And while they did not last as long as either The New Day or The Usos, they did a lot together as a team that puts them right there when any team.

The Bar was six-time tag team champions in their tenure. While none of their title reigns were lengthy by any means, each of them had a purpose and helped elevate a tag team division that needed it. They had matches with The New Day, Seth Rollins and Dean Ambrose, and The Hardy Boyz that are among the best tag team matches of the last five years in WWE by miles. Everything they managed to do was entertaining and underappreciated at the time, but more than anything it gave each man a chance to rejuvenate their careers against each other. If that isn’t a sign of a good tag team then who knows what is?

The Bar was a different team altogether for WWE. They brought back the old-school style of tag team wrestling, matching that with some of the best teams possible to create what was one of the most underrated runs in WWE history. Hard-hitting, consistent, and simply being the level for everyone to match is what defines the legacy of The Bar.