Edge and Seth Rollins’s SummerSlam 2021 bout is being billed as “seven years in the making,” dating back to a moment in which Rollins threatened to curb stomp Edge’s neck, compromised by injury and surgical repair. More recently, Edge’s shot at the Universal Championship was botched by Rollins, who intervened on behalf of Roman Reigns at Money in the Bank. The move wasn’t a show of solidarity for his former Shield brother, but a calculated move on the part of “The Architect:” eliminate Edge from the running for Universal Championship, which Rollins has in his sights. This led to Edge evoking his dark past in The Brood this past Friday on SmackDown.

The aforementioned move at Money in the Bank backfired and shifted Edge’s focus from Reigns and The Usos to Rollins. In an electrifying promo on August 20’s Friday Night SmackDown, Edge railed at Rollins that he had taken him to a dark place, a place where the blood in his heart runs black. Later in the broadcast, the lights turned red, The Brood’s theme played, and a shower of black blood-drenched Rollins’s white suit as he stood in the ring, in an allusion to Edge’s early days in WWE.

Edge & The Brood – Looking Deeper Into the Supernatural

WWE is no stranger to supernatural gimmicks. In the 1990s, vampires were a pop culture hot commodity. Anne Rice’s Vampire Chronicles series of novels, first published in the late 1970s, were having a second wave of popularity following the film adaptation of  Interview With the Vampire. Devoted fans flocked to Rice’s book signings, which had performance art elements like the author being lifted out of a coffin, held masquerade balls in honor of her characters, and even codified a real-life vampire lifestyle. Another contributing factor to the growth of this subculture was the tabletop RPG, Vampire: the Masquerade. Highly codified and infamously immersive, many used the game as a template to take their vampire fantasies to the streets.

Wrestler Gangrel derived his ring name from this popular game. After working initially for WWE as enhancement talent in the early 90s, Gangrel returned in 1998 with a vampire gimmick and formed the Brood stable filled out by young acolytes Edge and Christian Cage, who were both debuting with WWE after a supplemental training period at Bret Hart’s Calgary home. The Brood dressed like the vampires of Rice’s novels, and the subculture adherents of raves and punk clubs who were inspired by them: billowy shirts, PVC trench coats, and ring gear festooned with ankhs, the symbol of eternal life, vampiric or otherwise.

They mimed drinking blood from a chalice, which they spit at the audience, and, just as Seth Rollins suffered, their opponents were often bathed in blood from a trap door above the ring. 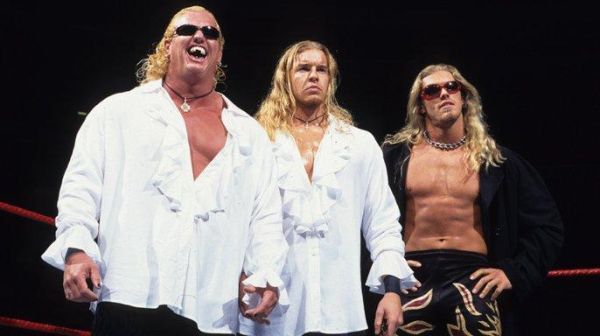 The Faction’s Endeavors in WWE

The Brood were heavily involved in storylines with another supernaturally driven faction, the Ministry of Darkness, led by The Undertaker. However, it was their feud with Matt and Jeff Hardy which truly make them a notable part of WWE history. Gangrel turned on Edge, enticing Christian to do the same. Christian sided with Edge, and they broke off from Gangrel in a separate tag team. When Matt and Jeff split from their manager, Michael Hayes, Gangrel swooped them up and declared them the New Brood. Despite their affiliation with Gangrel as a mentor, the Hardyz also competed with Edge and Christian for the coveted representation of Terri Runnels. This led to the culminating round of the competition at the No Mercy event. The Hardy Boyz, Edge, and Christian made WWE history by competing in its first-ever tag team ladder match.

The victors were The Hardy Boyz, who split with Gangrel and began their wildly popular halcyon days. Edge and Christian were their frequent rivals as they pushed WWE’s Attitude Era further into the extreme territory pioneered by Extreme Championship Wrestling and Japanese deathmatch promotions. Both tag teams became iconic for their death-defying ladder matches and tables, ladders, and chairs matches, especially those against each other.

Supernatural gimmicks don’t always pan out in pro wrestling. For every Undertaker or “The Fiend” Bray Wyatt, there is a lamentable gimmick like The Ultimate Warrior’s ghost on WCW. The Brood tapped into the 90s zeitgeist for vampires, while also serving as a launchpad for Edge, Christian Cage, Matt, and Jeff Hardy. Edge seems quite proud of his time as one of the undead, and his allusion to the Brood added quite a splash to his feud with Rollins.

What Is the Value of Zicky Dice to IMPACT Wrestling?
#AndNEW: Two Title Changes at DDT Wrestle Peter Pan 2021