For the first time since May, Game Changer Wrestling returns to Las Vegas, Nevada with GCW Off the Rails! This is set to be an exciting show, which will be held at the MEET Las Vegas venue; this was also the location for this past May’s GCW Draft Day event. For those that are in the area, you may wish to drop in, whether you reside in Vegas or are planning to make vacation plans that include everything from excellent dining to high-stakes gambling. GCW intends to bring the very best in independent wrestling under one roof. Without any further delay, let’s take a look at what to expect at Off the Rails.

Full GCW Off the Rails Card 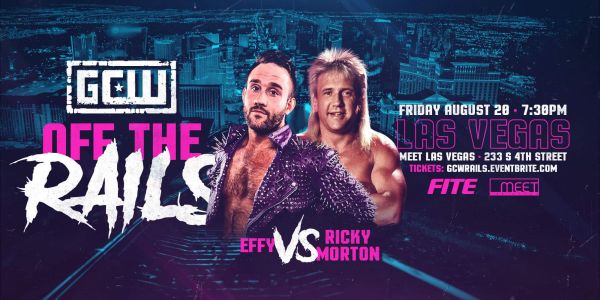 The first match confirmed for GCW Off the Rails pits EFFY against one-half of the legendary Rock ‘n’ Roll Express, Ricky Morton. To say that this is an intriguing match-up would be an understatement, especially given the fact that these men have never shared the ring with one another. Despite making multiple GCW appearances in the past – EFFY and Morton started appearing for the promotion in 2019 – Off the Rails will mark the first time they cross paths. It’s safe to say that while their wrestling philosophies differ in certain ways, coming up in different eras, there will be a certain level of respect shared.

Those familiar with the wrestling styles of both men should have a general understanding of what to expect heading into this match. Though EFFY is known for his colorful personality and undeniable charisma, his involvement in grueling endurance including this past June’s Tournament of Survival 666 shows that the glamorous self-proclaimed “Daddy” isn’t afraid to take matches to the extreme. This provides an interesting contrast to Ricky Morton who, despite having wrestled since the late 1970s, continues to perform at a high level. Boasting a technical wrestling approach, Morton is the consummate babyface in wrestling. Who will emerge victorious when classic rock meets contemporary flair? 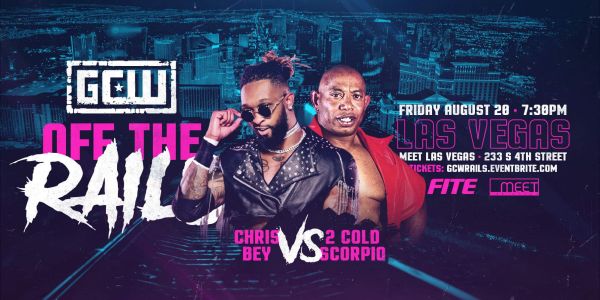 Another contest that will see two eras clash pits IMPACT Wrestling‘s Chris Bey against the seasoned veteran 2 Cold Scorpio. Though they come from different generations in wrestling, they share the same penchant for taking to the skies. In the case of Bey, high-flying offense has made him a prominent fixture in IMPACT’s X-Division. In fact, he can boast a reign as X-Division Champion, having the won title last summer. Recently, Bey has been actively recruited by Jay White to become a member of Bullet Club, and given the upward momentum professional wrestlers seek, allies are essential. At GCW Off the Rails, though, “The Ultimate Finesser” will fight alone.

Whenever Game Changer Wrestling holds a major event, it’s easy to assume that 2 Cold Scorpio will be part of the fold. Think back to Night One of GCW Homecoming last month, which saw Scorpio take on Grim Reefer in a first-time encounter. Though Reefer put forth a solid effort, it was the former 4x ECW World Television Champion that emerged victorious. Despite being in his mid-50s, when most wrestlers have either retired or are winding down their careers, Scorpio continues to soar like it’s the 1990s. Scorpio will enter this match with the experience advantage, though will it be enough to overcome his young, hungry opponent? Tune in to Off the Rails to find out. 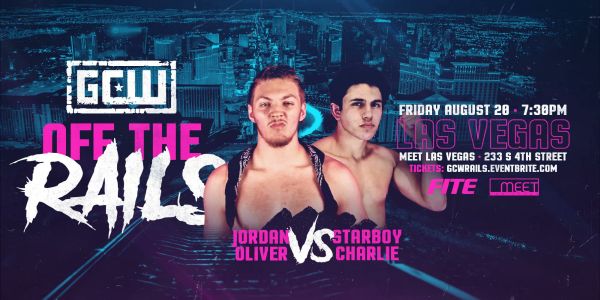 The Star Is on the Rise

There are few young stars in GCW with as much momentum behind them as Starboy Charlie. For those that aren’t in the loop, he scored a huge victory earlier this month at GCW No Signal in the Hills. On this night, he faced Chris Dickinson in what was their latest encounter. This past June at Zombie Walk, Dickinson defeated Charlie, so many fans assumed that No Signal in the Hills would be more of the same. To the surprise of many, however, Dickinson pulled out an upset victory, receiving a hero’s ovation in the process. Even Dickinson, who was more stunned than anyone, paid respect to his younger opponent. Simply put, Charlie is entering GCW Off the Rails with a burst of confidence on his side.

If Jordan Oliver has anything to say about it, however, said confidence won’t be everlasting. The brash New Yorker is no stranger to GCW and its sister promotion, Jersey Championship Wrestling. Like Charlie, Oliver is a high-flyer, though the latter carries himself with irrefutable cockiness. Jordan has seen quite a bit of success in GCW. The same night that Charlie bested Dickinson, Oliver picked up a victory over Treehouse Lee. Needless to say, Jordan intends to keep his success in GCW ongoing. To do so, he will have to overcome the up-and-comer in Starboy Charlie. This will be yet another fast-paced affair to keep an eye on. 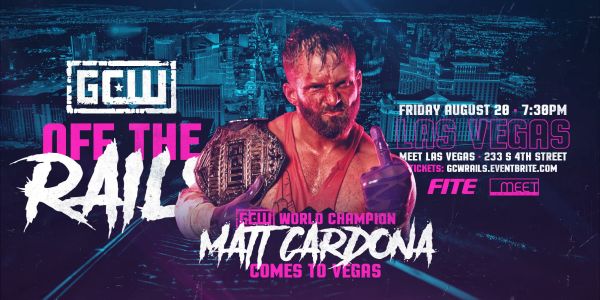 Matt Cardona’s First Title Defense at Off the Rails

Move over, Rickey Shane Page; there’s a new most vilified man in Game Changer Wrestling. It would be putting matters lightly to say that Matt Cardona hasn’t endeared himself to the GCW faithful. Not only has he talked down to them, referring to them as the “GCW Universe,” but he now holds the company’s top prize. On Night One of GCW Homecoming, with assistance from 44OH, Cardona defeated Nick Gage for the GCW World Championship. With this victory, more than ever before, Cardona could confidently proclaim himself the “face” of GCW. Since then, the “Always Ready” internet entrepreneur has been absent from the company. That is, however, until this Friday night, when he defends the GCW World title for the first time.

The question remains: who will step up to the challenge? Love him or hate him – and it’s evident many GCW diehards learn toward the latter – Matt Cardona remains the GCW World Champion. Who will the self-proclaimed “face” of the company stare across the ring from before the opening bell sounds? Will it be a legend or well-known star that has passed through GCW time and time again? Perhaps it will be an up-and-comer aiming for success at Cardona’s expense. All will be answered come Friday at GCW Off the Rails.

Stay tuned to the Last Word on Pro Wrestling for more on this and other stories from around the world of wrestling, as they develop. You can always count on LWOPW to be on top of the major news in the wrestling world, as well as to provide you with analysis, previews, videos, interviews, and editorials on the wrestling world. GCW Off the Rails is set to air Friday at 10:30 EST on FITE.