Match Point is an on-going series at Last Word on Pro Wrestling, where we look at intriguing matchups in indie wrestling and beyond. They may be dream matches, first-time matchups, or hotly anticipated rematches. With just a few days before WrestleMania Backlash, let’s take a look at the upcoming Universal Championship match between titleholder Roman Reigns and challenger Cesaro.

Since this return to World Wrestling Entertainment this past August, Roman Reigns has ruled over Friday Night SmackDown with an iron fist. “The Tribal Chief” quickly seized the Universal Championship and since that time, he has asserted his authority left and right. Whether it was beating his cousin, Jey Uso, into joining his ranks or sending Daniel Bryan packing from the blue brand, Reigns’ path of rage has seen no boundaries. With WrestleMania Backlash fast approaching, has the reigning Universal Champion met his match in Cesaro?

2021 has proven to be an incredibly successful year for Cesaro thus far. He has picked up singles victories over the likes of Murphy, Dolph Ziggler, and Daniel Bryan, the latter of whom was shown mutual respect by “The Swiss Superman.” His first major obstacle of that year took the form of Seth Rollins, who attempted to coax Cesaro into joining him. When Cesaro refused, Rollins viciously attacked him, which led to their showdown at this past April’s WrestleMania 37 event.

The WrestleMania 37 Successes of Roman Reigns and Cesaro

On Night One of WrestleMania 37, Cesaro faced, and defeated, Rollins in the former’s first singles match on “The Grandest Stage of Them All.” This wasn’t the only piece of news from the two-night event that had fans talking. The following evening, Reigns successfully defended his Universal Championship against Bryan and 2021 Royal Rumble winner Edge, stacking them up in a dominant victory. It should have come as little surprise to fans, given their individual WrestleMania successes, that Cesaro and Reigns would eventually cross paths.

The Friday after, on SmackDown, Roman Reigns, Jey Uso, and Paul Heyman opened the show. The Universal Champion wasn’t shy to gloat about his victory, believing no one would want to step up to him. Enter Cesaro, who stood toe-to-toe with Reigns. Cesaro motioned for a microphone, but as he did, the aforementioned trio left the ring. Cesaro would wrestle multiple singles matches against Jey, furthering the rivalry between “The King of Swing” and SmackDown’s “Tribal Chief.” Cesaro directly challenged Reigns to a title match. In disbelief, Reigns rejected the challenge, seeing Cesaro as a “casino loser” that wasn’t on his level. 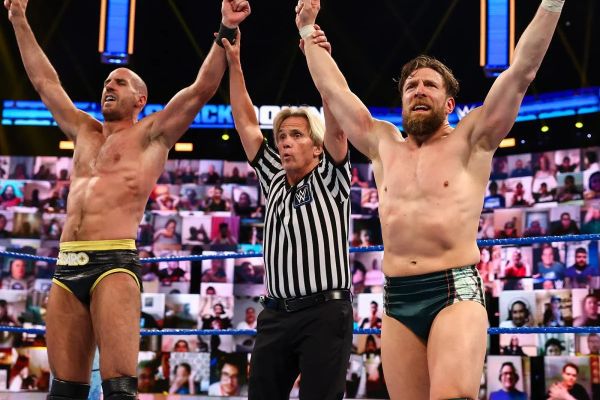 Cesaro quickly forged a partnership with Daniel Bryan, whose Univeral Championship ambitions remained. At his wits end with Bryan’s persistence, Reigns issued the challenge: if Bryan lost to him again, the leader of the “Yes!” Movement would have to leave SmackDown for good. With Cesaro’s encouragement, Bryan accepted. Despite a valiant effort, Bryan was unable to defeat Reigns. As if being banished for SmackDown wasn’t enough, Bryan was subject to a post-match beatdown courtesy of “The Head of the Table.”

In an effort to save his ally, Cesaro rushed to the ring, attacking Reigns. Jey would intervene, nailing Cesaro with a superkick. Jey proceeded to tie a weakened Cesaro in the ropes, forcing him to watch as Reigns delivered a one-man conchairto a fallen Bryan. To say that this took the feud between Reigns and Cesaro to another level would be an understatement. Now, without his number-one supporter, Cesaro was that much more driven to unseat Reigns as SmackDown’s top titleholder. 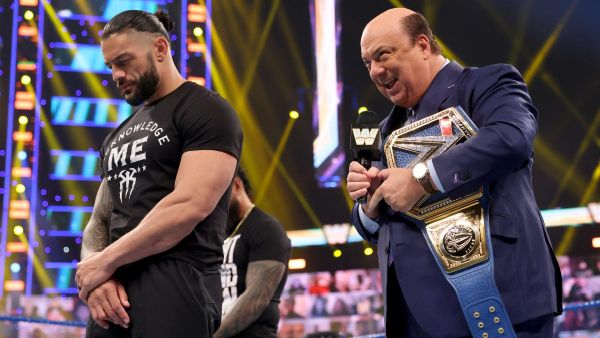 One week after Bryan’s violent banishment, on the Throwback Edition of SmackDown, Reigns, Jey, and Heyman held a mock eulogy for the former five-time WWE world titleholder. This is where the story formed an interesting wrinkle in Jimmy Uso, who made his SmackDown return following several months of in-ring inactivity. Though he greeted Reigns, Jey, and Heyman like family, there seemed to be a sense of apprehension.

Cesaro interrupted, making it clear that he wasn’t about to take said banishment lying down. Keep in mind that he was scheduled to face Rollins on this episode. Rollins would soon attack Cesaro from behind. From there, former SmackDown General Manager Teddy Long appeared to add a stipulation to the match; if he defeated Rollins, Cesaro would take on Reigns in a Universal Championship match at WrestleMania Backlash.

Despite Cesaro being attacked before the opening bell, “The Swiss Superman” stayed in the match. It would soon reach its crescendo when Rollins confronted Jey, telling him he didn’t need help as Reigns did. Suddenly, Rollins was struck with a superkick courtesy of Jimmy. This gave Cesaro the opportunity he needed to roll his opponent into the ring, hitting the Neutralizer for the victory. It was official: Cesaro would challenge Reigns for the Universal Title at WrestleMania Backlash. Meanwhile, Reigns began to question Jimmy’s loyalties.

Roman Reigns Lays Down the Law

Later in the show, Jimmy confronted Reigns, Jey, and Heyman in the ring. Jimmy took umbrage with his cousin’s newfound tyrannical attitude and his brother’s willingness to “acknowledge” Reigns. “The Tribal Chief” gave Jimmy the choice to either join them or go home. Conflicted, Jimmy left the ring. As Jey attempted to talk what he believed to be sense into Jimmy, Cesaro sneaked into the ring to attack Reigns. This resulted in Cesaro laying out all three Samoan wrestling family members. It was here where Cesaro showed fire and passion that would be critical to unseating the Universal Champion.

The WrestleMania Backlash go-home edition of SmackDown opened with Jey Uso, who had unresolved issues with his brother. “The Head of the Table” admitted that while he respected Cesaro as a wrestler, Reigns himself was much more than that. Jey and Reigns’ attention turned to Jimmy Uso, who came out wearing a shirt reading ‘Nobody’s Bitch,’ which only got under the skin of the Universal Champion. Once again, familial disagreements ensued. Reigns challenged Jimmy, saying that if he wanted to be the “top dog,” he should face Cesaro. From there, the main event was set between Jimmy and Cesaro.

The competitive main event between Jimmy and Cesaro would end when, out of nowhere, Jey and Reigns became involved. The referee called for the bell as Reigns attacked Cesaro. Jimmy stormed out of the ring, believing he had the match won. Reigns verbally ran down Jimmy; meanwhile, in the ring, a recovered Cesaro retaliated against Jey. As Cesaro stood tall, the Uso brothers laid out, Reigns glared from the ramp. With this closing segment, a message was sent: the challenger was ready for the champion.

Cesaro is heading into WrestleMania Backlash with the goal of becoming Universal Champion. Keep in mind that this will be his first singles encounter for a world title in WWE. Furthermore, he will be taking on Roman Reigns, whose path of dominance has been unlike anything else in recent memory. Cesaro’s skill and passion can’t be denied and it will take a superhuman effort on the part of Reigns to take SmackDown’s “Swiss Superman” from the skies. Expect nothing short of a competitive encounter this Sunday.