WrestleMania 37 marks the first time in over a year that WWE will have a live audience, making it that much more special. Night one will kick off with the WWE Championship match and will conclude with the SmackDown Women’s Championship bout. It was a special night. Here are the WrestleMania 37 night one results and analysis.

— Braun Strowman vs. Shane McMahon in a Steel Cage Match 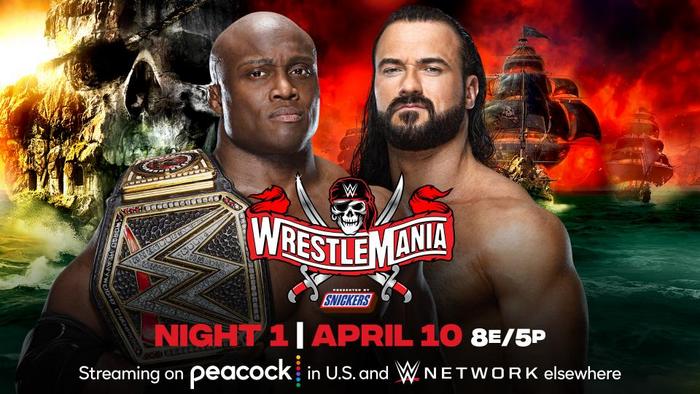 WrestleMania 37 could not go out without a hitch as a rain delay forced the opening match to not start for over 30 minutes, but when they finally got going, it all felt right. And Drew McIntyre would be the first man to get his entrance in front of the WWE Universe as he would compete for the WWE Championship. “The All Mighty” Bobby Lashley looked to defend it after avoiding McIntyre to win it in the first place. And what they did was simply deliver.

From beginning to end, these two had one of the most physical matches in WrestleMania history. It will go down as one of the best openers in the event’s history as well. At one point, McIntyre hit Lashley with three straight Future Shock DDTs but was not enough to put the champion away. When the challenger tried to win via Claymore, MVP distracted him long enough to allow Lashley to move out of the way. “The All Mighty” was able to lock on the Hurt Lock after multiple attempts and eventually made McIntyre pass out to retain the championship.

This finish capped off a brilliantly physical match that got the crowd off to a perfect start. Lashley’s win reaffirms that this the “All Mighty Era.” 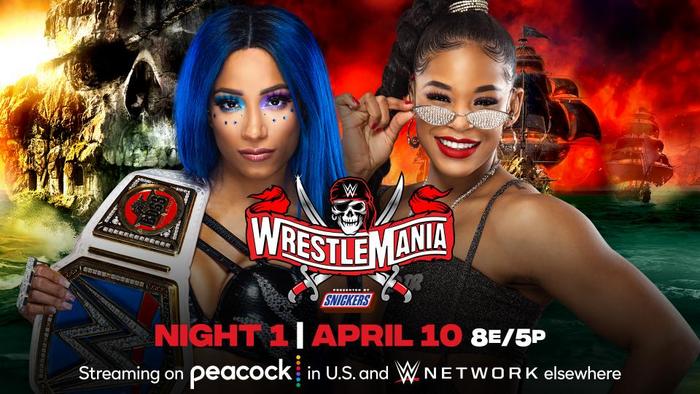 Sasha Banks and Bianca Belair were making history at WrestleMania no matter what. But on Friday, it was announced that they would indeed main event night one of the event, adding that much more history to their highly anticipated match. Fans around the world believed that these two would steal the show and that is exactly what they did. As soon as the opening bell rang, these two showed their emotion. It was a big deal and they knew that. The crowd gave them a standing ovation and it was not long before these two were ready to get rolling.

Banks and Belair battled back and forth for the majority of the match, essentially trying to one-up the other move in and out. What was most impressive in the early going was how Belair was able to counter everything the champion threw at her and showed she was on the top of her game. But of course, the savvy Banks was able to answer right back with a unique offense she had never brought on in any match before. Whether it was the double tornado DDT or the grand uses that Banks had for Belair’s hair, she was on top of her game.

At one point during the match, Banks went for a suicide dive and it seemed it was picture perfect, but instead Belair caught her and carried her all the way back into the ring. When we say Belair was on the top of her game, we meant it. It’s almost as though they could not miss with the magic they were displaying and the crowd was eating it up. As the match came down to the final moments, Banks used Belair’s hair to lock on a variation of the Banks Statement before pushing it into the real move. Yet, the challenger was able to fight out of that as well.

The closing sequence was a treat. Belair would attempt to get Banks up for the KOD, but “The Boss” was able to get out of it not once but twice. The second time was by the hair of Belair, who would get fed up and utilize it to slash Banks across the stomach, get her up for the KOD, and win the gold. It was a true WrestleMania moment and will go down as one of the best main events WrestleMania has ever had.

Overall Analysis For Night One

WrestleMania 37 kicked off with trouble but ended with everyone around the world remembering what magic WWE can still bring to the table. The reintroduction of the fans to the show made for a very special first night no matter how good or bad matches were. Overall, however, it was a plus night. Drew McIntyre and Bobby Lashley managed to kick off the night with a bang, showing that the WWE Championship was still one of the top prizes in professional wrestling. Lashley getting the win may have been shocking to some, but was a decision that will help positively influence Raw moving forward. It’ll be interesting to see McIntyre out of the title hunt for the first time in over a year.

The Women’s Tag Team Turmoil match had its moments but managed to be a difficult one to put together at times. The Riott Squad showed to be the shining stars and worthy future tag team champions when their time does come. Tamina got a WrestleMania moment after all these years, so that was nice to see.

Cesaro and Seth Rollins didn’t need to have a 20 or 30 minute classic to tell the story they did. Rather from the very start, it was a race to trying to get the better of the other man. Many would agree that it was the old version of Rollins that showed up to fight Cesaro, as everything he did looked magnificent and felt as though it was the main eventer everyone knew he was. And considering this was “The Swiss Superman’s” first singles match on “The Grandest Stage of Them All,” you knew he was only going to go all out. The finish may have only been topped by that of the main event as the Curb Stomp into the European Uppercut followed by the UFO spin and another 23 swings, finished by a second Neutralizer for the victory. It was all action that was welcomed from beginning to end.

The New Day versus AJ Styles and Omos was about one thing and one thing only — making Omos a star. And that’s exactly what was accomplished. New Day did a brilliant job at keeping Styles away from his corner, but once he found an opening, it was over. Omos looked nothing short of the monster they wanted him to be and pinned Kofi Kingston with one foot after a massive Chokebomb. Styles also became a grand slam champion with the win.

Braun Strowman facing Shane McMahon in a Steel Cage match was nearly as tough as the feud itself. It started off with Elias and Jaxson Ryker attacking Strowman with a chair before the match and didn’t get going until the very end. The one really cool spot was when McMahon was on the other side about to win, resulting in Strowman destroying the cage with his hands to pull McMahon back in. He would throw him off the top of the cage for the big crash and burn before hitting the powerslam to end it.

Bad Bunny did everything in his power to show that he belonged on the WrestleMania stage, having one of the best celebrity match appearances possibly ever. His teaming with Damian Priest continued to feel like the right move by WWE, as Priest fed of Bunny’s star power in the win over The Miz and John Morrison. Bad Bunny hit a Falcon Arrow and Canadian Destroyer… simply incredible.

As you may have read before, the deserving main event delivered, and then some. Once their emotions of the moment disappeared, these two went to work to show that not only they deserved the spot, but they were going to have the best match possible. Sasha Banks has called herself the best of all time in previous interviews and this outing may have put her in the discussion overall, but in-ring-wise, she may have locked that up. Belair had the best match of her career as well, showing everyone that she was not only ready but the star everyone thought she was. When Belair got the pinfall and the visual of her father jumping over the barricade occurred, you knew that was a WrestleMania moment to hold onto forever. It concluded a great night one of WrestleMania.