Enjoy a double dose of tag team action on this upcoming episode of ChocoPro. Gatoh Move Pro Wrestling has brought together many of the notable teams that have appeared in their promotion, as well as an unlikely tandem that could pose a challenge for the current reigning Asia Dream Tag Team Champions. For those that are planning on tuning into the official Gatoh Move YouTube channel, here is the action to expect. 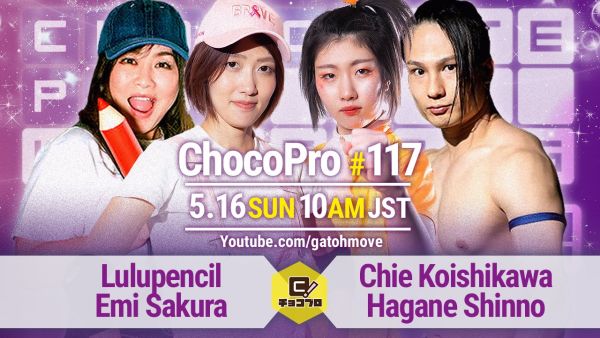 On the previous episode of ChocoPro, Pencil Army’s two female members took part in their own endeavors. While “Emi Pencil” squared off against Sayuri in a cunning encounter, Lulu Pencil joined forces with Best Bros’ own Baliyan Akki in a competitive showing. Now, Pencil Army will become one once again. Despite the challenges that the plucky group experienced as of late, from continued tag team losses to the defection of one of their own members, they will march forward. To say that a challenge awaits, however, would be an understatement.

Egg Tarts, the team of Chie Koishikawa and Hagane Shinnou, continue to gel in ChocoPro. In fact, one can argue that it’s through Koishikawa’s energetic influence that the often stoic Shinnou has opened up more, showing more personality. Shinnou’s last ChocoPro appearance dates back to episode #110, where Egg Tarts and Best Bros bested the four-person Pencil Army group. Egg Tarts are familiar with Pencil Army and vice versa. Will Pencil Army finally achieve that elusive victory or will it be Egg Tarts that secure the victory? 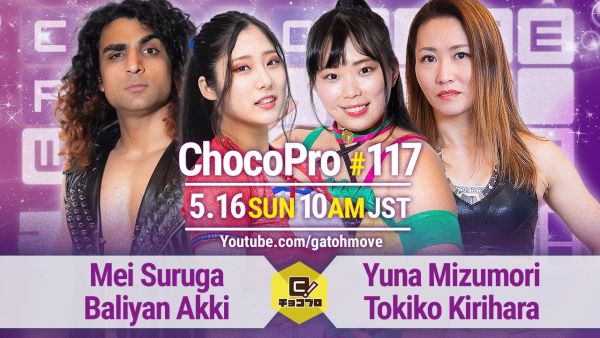 In the main event of ChocoPro #117, Best Bros will be in action. Much like Pencil Army, as stated earlier, Mei Suruga and Baliyan Akki took part in separate efforts on the last episode. While Suruga battled Actwres girl’Z star Yuko Sakurai in the main event, Akki teamed with Lulu Pencil in their own tag team match. However, when together, there are few teams in Gatoh Move that can truly hang with Best Bros. Furthermore, they have learned to anticipate new, unique challenges; this will be no different come episode #117.

It may surprise ChocoPro viewers to know that this isn’t the first time that Yuna Mizumori and Tokiko Kirihara have teamed up. Think back to episode #65, where “The Pineapple Girl” and “Otoki-san” fell in a losing effort against Akki and Chie Koishikawa. Furthermore, when one thinks of Mizumori and Kirihara’s tag team efforts, they may think of their respective work with Chris Brookes and Antonio Honda. Nonetheless, the combined strength of Mizumori and Kirihara will prove to be a major obstacle for Best Bros as they aim to continue their momentum as the top team in Gatoh Move.