Violence X Suffering (VxS) has become one of the top U.S. indie promotions over the past year under the new management of Isaac Rodriguez, utilizing a hybrid presentation combining hard-hitting pro wrestling with a dash of deathmatch, plus a smattering of technical and high flying prowess. This week they make their WrestleMania Week debut with VxS Lucid Dreams on Friday, April 9 as part of Game Changer Wrestling (GCW)’s Collective Remix at 11:59 pm, airing live on FITE.tv. Here’s a rundown of the explosive card.

No Disqualification – Dr. Cube vs. JTG 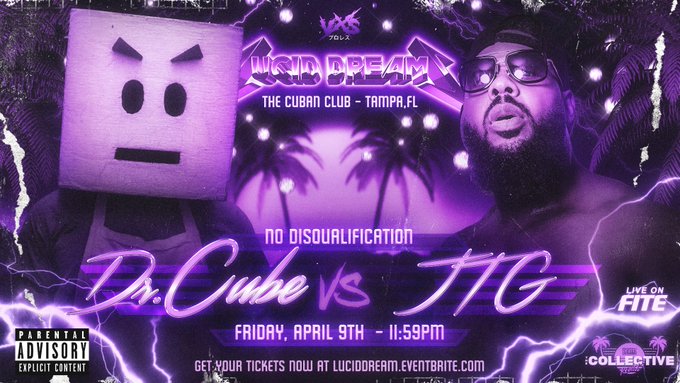 The nefarious Dr. Cube is the supervillain that causes violence and suffering in Kaiju Big Battel, and now the evil mastermind is making his WrestleMania Week move towards world domination by joining VxS for Lucid Dreams. Former WWE Superstar JTG – the longtime tag team partner of the late Shad Gaspard in Cryme Tyme – has reinvented himself as one of the indies’ toughest fighters in the past few years with VxS and others, taking down such names as Rickey Shane Page, Mance Warner, Alex Hammerstone, Tony Deppen, and Trey Miguel. Fighting for the honor of his fallen brother, JTG has emerged as a vicious pit bull in the squared circle and last night came up short in a vicious slugfest with AJ Gray at GCW For The Culture. JTG will be looking to avenge that loss and save mankind as he faces Dr. Cube for the first time. 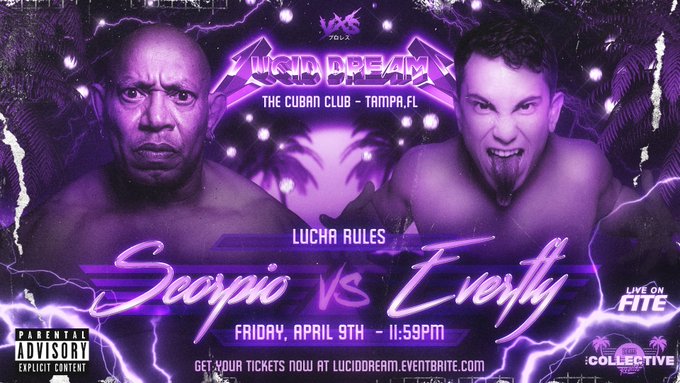 2 Cold Scorpio‘s return to ring dominance over the past year on the U.S. indies has been a testament to his longevity and relevance in today’s modern independent scene, and his career renaissance continues on Friday night when the legend faces off against Eli Everfly. Eli Everfly is a West Coast star who’s a regular with Santino Bros Wrestling, Ground Zero, and Future Stars of Wrestling (FSW) who has continuously made a mark with his East coast appearances with VxS and Game Changer Wrestling (GCW). A battle of two very different high flyers, this will be an experiment in defying gravity. 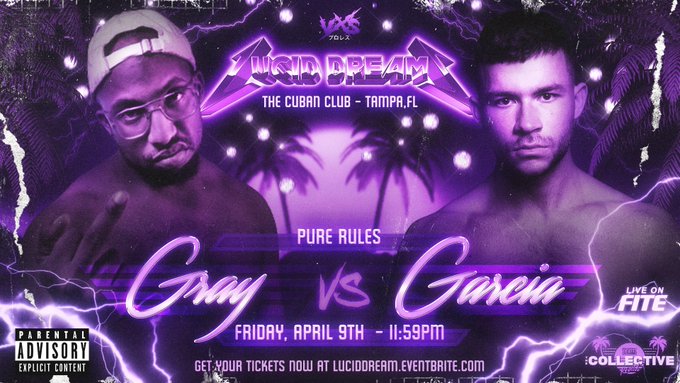 AJ Gray remains one of the hardest hitters in the US indies right now, and since adding deathmatch wrestling to his repertoire in the past year or so, he’s only become more dangerous. The former GCW World Champion will not want to lose his match on his own showcase, but he’s facing a man that has become more dangerous in his own right. Daniel Garcia has cemented himself as one of the great young stars in Pure wrestling, all while returning from a catastrophic injury that made many wonder if he’d wrestle again. Since his return to the ring in June 2019, Garcia has been a machine in the ring, and now holds the top title in three different promotions in two countries – he’s the Empire State Wrestling (ESW) Heavyweight Champion in his home town of Buffalo, the C4 Champion for Capital City Championship Combat (C4) in Ottawa, Canada, and he just recently won the Limitless World Championship in Maine. In the past year, he’s also made his debut with AEW on several episodes of AEW DARK as well as debuting with WWE on an episode of NXT. 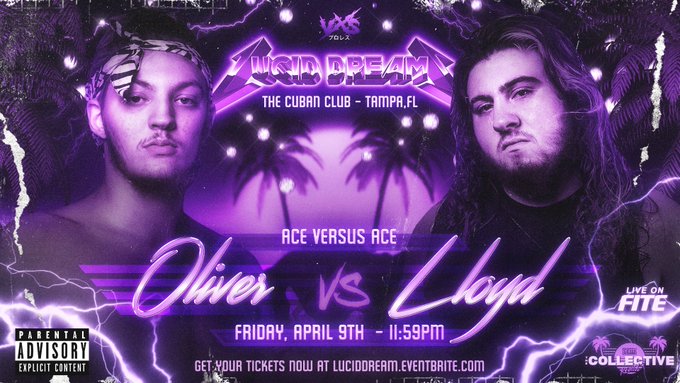 Two very different wrestlers competing for the mantle of “Ace of VxS”. Jimmy Lloyd has become a gatekeeper on the Eastern scene with GCW and VxS and “The Different Boy” feels its his time to shine as the face of VxS. But he has some very strong competition in the form of Jordan Oliver, who had his biggest year ever in 2020. Two young stars ready to take it to the next level and the only obstacle in each other’s way is each other. Lloyd is right at home in the deathmatch environment, but Oliver will have to try and keep the action more mat-based to avoid Lloyd’s use of weaponry if he wants to take this one – that being said, as a regular with both GCW and CZW, Oliver is no stranger to the ultraviolence should that aspect come out in the match. 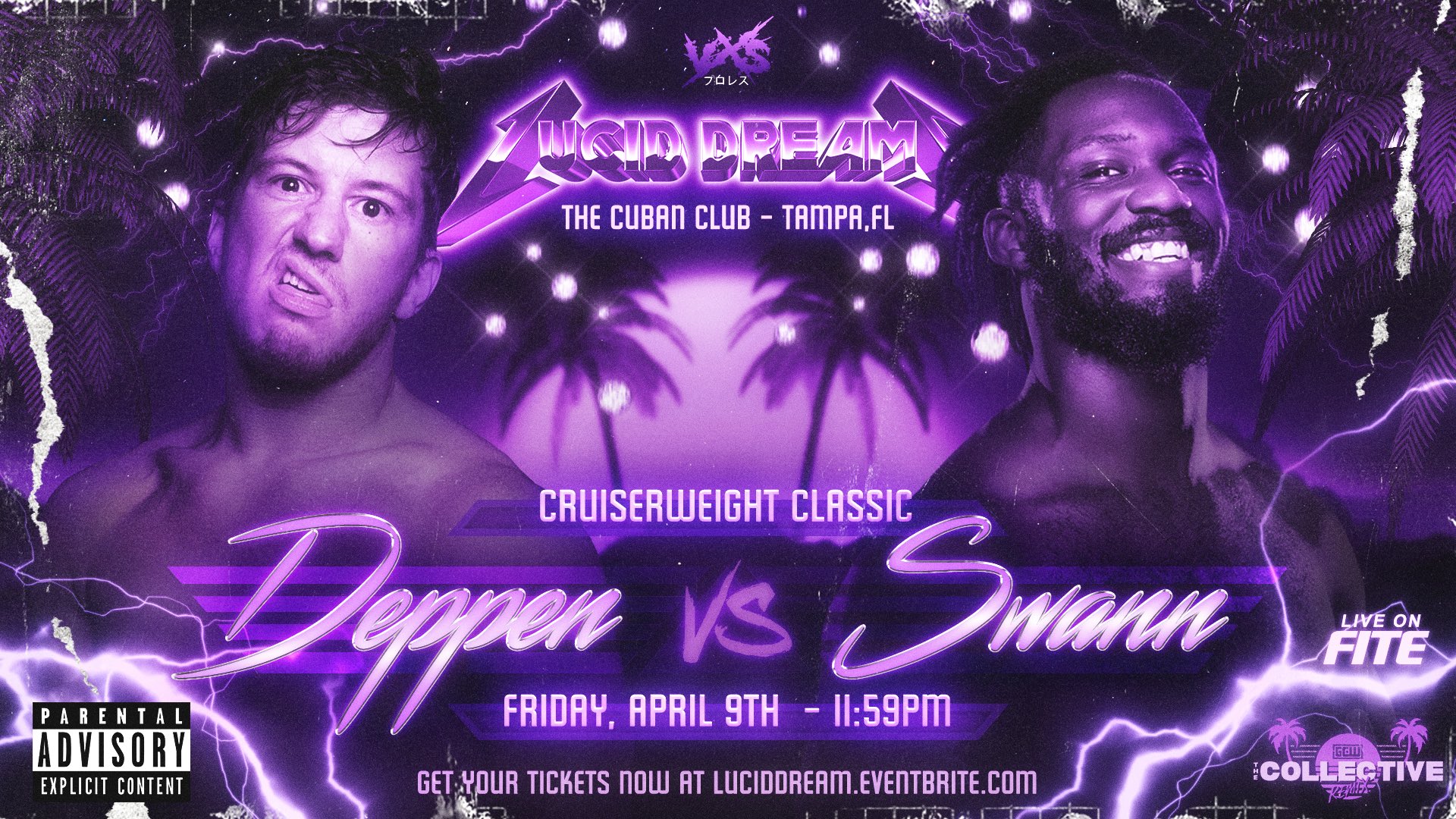 Update: Tony Deppen has announced he is off his remaining appearances due to injury.  No replacement announced yet

Tony Deppen has also had a strong past year, debuting with Ring of Honor last fall and now a part of Brody King‘s new faction, VLNCE UNLTD. Deppen has been a major force on the U.S. indies over the past few years, as a featured star with the likes of GCW, ICW No Holds Barred, Beyond Wrestling, CHIKARA, and more. It’s hard to pinpoint a bad Tony Deppen match ever. On Thursday night, he steps in the ring with the current reigning IMPACT World Champion in Rich Swann. While Swann is awaiting his title vs. title match against AEW World Champion Kenny Omega at IMPACT Rebellion at the end of this month, he’s prepping by taking on some big challenges this week. Last night at GCW For The Culture, he defeated 2 Cold Scorpio, and now he’s set to face Deppen the following night. 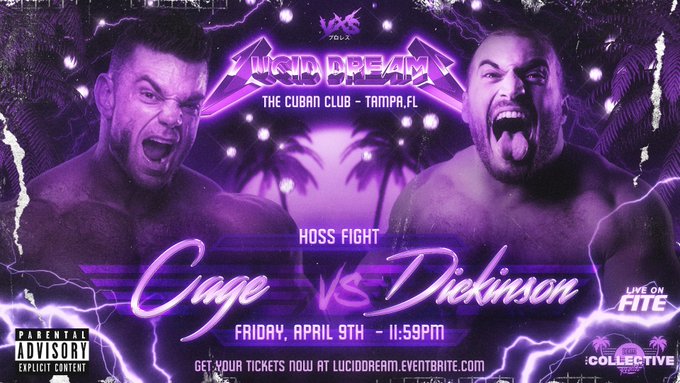 An absolute Hoss fight, as AEW’s Brian Cage collides with NJPW/ROH star Chris Dickinson. Brian Cage has been on a tear with AEW since joining the company after being World Champion with IMPACT Wrestling, and the big man’s frightening combination of power and agility is a threat to any opponent. But this opponent, Chris Dickinson, is also known for his hybrid combination of strength and speed, having been one of GCW’s top stars of the past five years before joining NJPW STRONG and siding with Brody King in ROH. This one is going to be physical and hard-hitting, and regardless who wins, both men will be physically challenged like few times before. 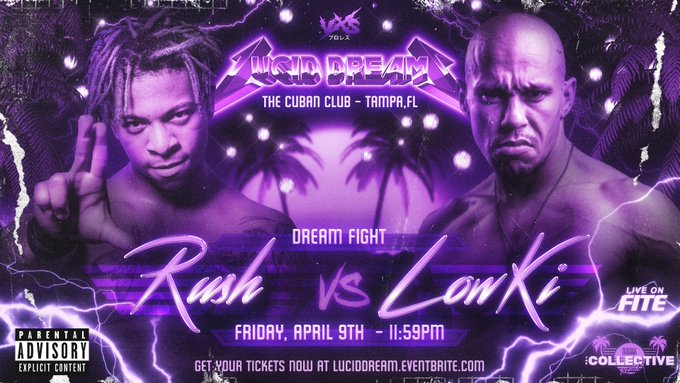 Lio Rush continues his amazing return to the indies since departing WWE last year, and on Thursday night, he’ll face off against one of the 2000s biggest indie legends in Low-Ki. A former World Champion with MLW, PWG, and ROH, as well as a 5x IMPACT X-Division Champion, 3x IWGP Junior Heavyweight Champion, Low-Ki has a trophy case that would be the envy of most, but its the fight in the game that he competes for. And having two generational stars collide in this dream match is going to be something else to witness entirely.