It is time once again for the gayest event of WrestleMania week. It says so right in the title! Returning once again as part of GCW’s The Collective is EFFY’s Big Gay Brunch. The event will be hosted by drag queen and entertainer Pollo Del Mar. Many of the best LGBTQ+ athletes in North America will be in action: Edith Surreal, Devon Monroe, AC Mack, Dark Sheik, and of course the event’s namesake, EFFY. 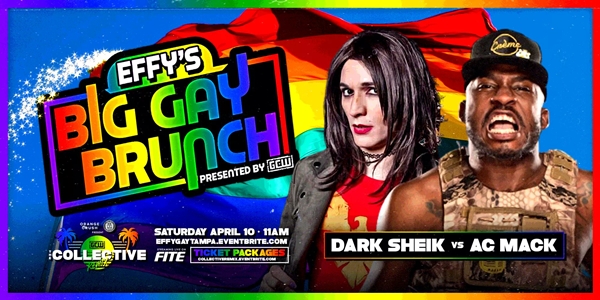 Two of the most underrated parts of the Queer wrestling scene clash as Dark Sheik takes on AC Mack.  Based mostly on the West Coast, Dark Sheik has impressed every time she has performed in GCW including her show-stealing match with Edith Surreal at last year’s collective.  AC Mack has been a dominant presence in southern indies like ACTION Wrestling where he was ACTION Champion for 798 days.  If you aren’t keeping an eye on this one then you’re going to miss one of the potential show stealers of the week. 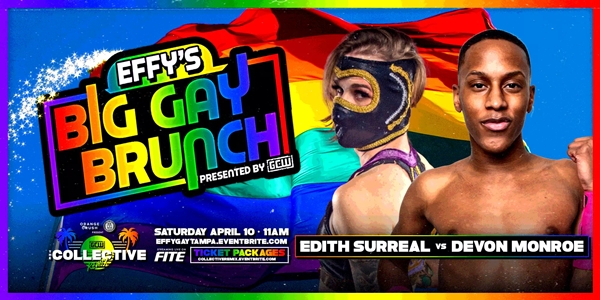 Two of the standout queer performers in all of the U.S. compete at Effy’s Big Gay Brunch, this is a rematch from the Big Gay Block at Fight Forever which saw Surreal get the win.  Edith Surreal has been earning acclaim ever since spreading her wings beyond CHIKARA and ever since shedding her Still Life with Apricots and Pears identity has become one of the top stars of the U.S. indie scene.  She takes on Devon Monroe who is a rising star that has competed under the GCW banner previously at both Big Gay shows as well as For The Culture.  Will Surreal take a 2-0 lead in their GCW series or can Monroe level things up against one of the hottest names on the indies today. 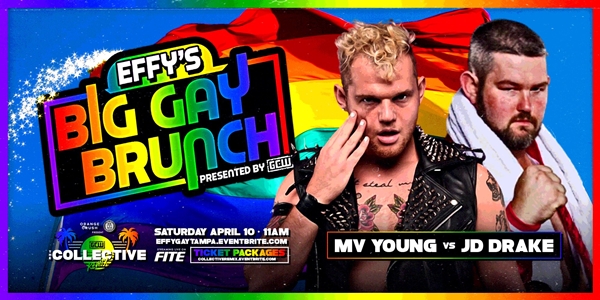 In an interesting clash of styles, the PolyAm Cult King MV Young will take on JD Drake. This would certainly appear to be a one-sided affair. However, if you are unfamiliar with MV Young, you are in for a surprise. This handsome and somewhat flamboyant star is not afraid to destroy himself and sacrifice his body for a victory. Should JD Drake underestimate Young, he will be in for a rude awakening at EFFY’s Big Gay Brunch

There are a couple of matches which are well, rather interesting. Parrow will be hosting a Twink Hunter Tag Team Gauntlet Match. Confirmed as participating so far are the teams of The Runway, Bitcoin Boyz, Bad Bitchez, and Pretty In Pink.

EFFY will also be in action against Ace Perry in a Soul on a Pole match. Researching into this match type, it would appear it is the first of its kind. It is unknown as of press time what will represent the immortal soul on said pole, or what the winner will actually walk away with. This and so much more gay brunch-type antics are in-store at EFFY’s Big Gay Brunch.

You can watch EFFY’s Big Gay Brunch live or on-demand as part of GCW’s The Collective on FITE. You can purchase the event individually or as part of the Collective bundle.