Indie Watch is our regular series that looks at all of the amazing talents working the independent circuits around the world. Some are veterans revitalizing their careers, some are indie prospects hitting their peaks, while others are names to be on the watch for! In this edition, we take a look at one of the pioneers of the LGBTQ+ community in pro wrestling, 20-year veteran Dark Sheik, who performs on the West Coast, where she also runs and operates the Hoodslam promotion.

For two decades, Sam Khandaghabadi – an Iranian-American who grew up first in Georgia before heading to the West Coast in 8th grade – has been helping nurture the West Coast independent scene, as both owner of the Hoodslam wrestling promotion in Oakland, California, and as the veteran wrestler Dark Sheik. With a huge spotlight on the LGBTQ+ community in wrestling in 2020 during the pandemic, more and more people are discovering LGBTQ+ performers from coast to coast, including Cali’s Dark Sheik, who transitioned nearly a decade ago. In an interview this past fall with Wrestling Inc. to promote Dark Sheik’s match against burgeoning indie superstar Still Life With Apricots & Pears at EFFY’s Big Gay Brunch during Game Changer Wrestling (GCW)‘s The Collective, promoter/wrestler EFFY touted Dark Sheik as the “secret of the West Coast” and the “godmother of this alternative wrestling”. For twenty years, Dark Sheik has ruled the underground of the West Coast indie scene. Now is her time to shine. Last Word on Pro Wrestling spoke to Dark Sheik about her early start in pro wrestling as an Iranian-American, Hoodslam, the West Coast indie scene, the LGBTQ+ community, and more. 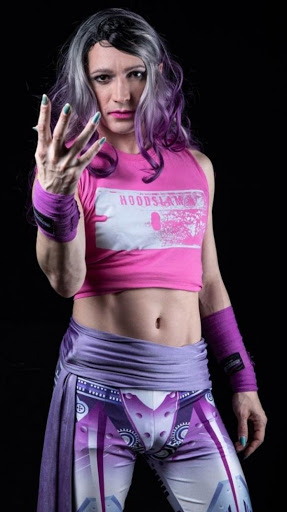 LWOPW: What initially drew you into the world of pro wrestling?

Dark Sheik: I loved it growing up. The characters and story. Drama and combat. I’ve done a lot of things, but wrestling is at the epicenter of all of them. Nowhere else can I perform a live one-take improvised fight scene with physicality, storytelling, and fan interaction.

You entered the industry in the post-911 world, where anti-Arabic tensions were at a high. How was it dealing with that kind of atmosphere while starting out?

I started before 9/11, I had to change my name from Persian Tiger to Tiger Kid. I didn’t understand why. They said I was too small to be a heel and that a Persian couldn’t face. It was problematic for a lot of reasons, but I knew I’d eventually have to be a Sheik anyway. They’d already decided when they learned I spoke Farsi. That atmosphere was the totality of my first 10 years, and it was difficult to shake. When I finally broke free, it was all at once and epic and led directly to the birth of Hoodslam.

How soon after 9/11 did your performance in pro wrestling have to change? Was it an immediate after effect or did it morph out of audience hostility?

It was immediate hostility from my home promotion. It was a conversation that happened without me and then someone told me to pick a new name.

How did you deal with that kind of turning of the crowd from more of a political/ignorance aspect than a true “heel” moment? Effy has stated that he used to use the homophobia in the crowd to fuel him to be “gayer”, did you ever use your ethnicity as fuel?

I played the part I was given but I never did anything I thought would embarrass me as the Iranian kid who used to go to shows. I’d seen people play a stereotype and knew how I felt. Insulted, but also afraid all these people booing a fake Arab would turn their attention to this real Persian right next to them. Luckily, I’ve always just been really really good. People would often approach me and say they dislike my character but like my wrestling. I’d tell them I really am Iranian, and now they had to confront their own inner fears and see how they contrast from this real person.

You started Hoodslam in 2010, fairly early into your career in many aspects. What was it about the West Coast indie scene that you found lacking that you felt the need to start up your own promotion?

The two things missing were enjoyment and an audience. Too much of the old guard never learned right and had very little to offer their students other than how to sacrifice themselves. I don’t see wrestling as a sacrifice, it’s more the embodiment of fulfillment. The other change, I didn’t want to be indy show 1001. I wanted to represent our own identity and not look like a cheap version of someone else. So many people try to replicate what they see, and fail to compare. I wanted to break that spell and show a better way.

What were some of the trials and tribulations of starting up Hoodslam in the first year? Any words of advice you would give a younger Dark Sheik in those days?

It was easy. I just believed in myself, had an amazing series of opportunities, and was lucky enough to know a whole crew of talented wrestlers, musicians, and performers that were gracious enough to go along with my crazy but good ideas. My only advice would be to trust my gut even more.

What are some of the aspects of Hoodslam that you’re most proud of, in terms of what it offers as a promotion that no one else can offer?

Streaming some 60 shows in a year, doing an opera, having the first same-sex legit wedding in a ring, drawing over 1000, the Femmed Out and Fearless events, our best theatrical production award, being written into a Superman comic, having Jello Biafra perform in the ring, Shotzi, Mansoor, Stoner U, GLAM, Sexy Goodtime Wrestleshow, BLOODSLAM and all the stories we’ve gotten to share and the people I’ve met on both sides of the curtain.

The West Coast scene seems to be severely under shadowed on the national scale (outside of PWG). Why do you think that is? How would you like to see that change?

It’s firstly because it’s hard to fly people back and forth. There’s a barrier called the Mississippi river and few cross back n forth. Secondly, we don’t support each other. When someone does something great people are more excited for them out of town than they are within their own backyard. Third, erasure. People on the east coast see us with fans against the ring, streaming weekly live events for free, being progressive – and it’s normal for them to emulate. It’s great, even. But they present themselves as pioneers to territory we already mapped, and the momentum they get from our ideas is never used to elevate the source. Maybe the gimmick is outright lifted like Richard Shhhnary. Or if a Shotzi or Mansour do make it to NXT, all of a sudden Stoner U and Oakland is erased from their biography. We suffer from actively having our achievements ignored. Change is inevitable, I see people like Will Hobbs, Dave Dutra, Heather Monroe, Vipress and more making waves in spite of these barriers and I can smile at that here and now.

Did you ever think that the success of PWG may open more eyes to the West Coast scene when it was lightning hot? And why did PWG not scratch that itch for you that you needed to start Hoodslam?

No, PWG didn’t do much for California because once it grew to a big audience, barely anyone from California was on it after. PWG is great, but I never worked there. And when everyone from outside of Cali brings it up instead of asking us about stuff we’ve actually been a part of, it distracts from our local work and just puts energy back to whoever got flown in. We drew 1000 people with all locals regularly, but Meltzer didn’t write about it so it’s not as good I guess.

Who are some West Coast wrestlers – veteran or up-and-coming that the rest of the country should be more aware of?

You’ve since become one of the pioneers of the LGBTQ+ scene as a trans wrestler. With LGBTQ+ wrestling now becoming more widely appreciated and showcased, what are some of the obstacles you’ve encountered in the past decade leading up to this point?

Being alive and not dying.

Maria Moreno effectively kicked open the doors for trans wrestlers. Do you think she gets the recognition she deserves?

I recognize her as an inspiration, and her name coming up is a clear sign of what she’s done. I also just love knowing and wrestling her and that has nothing to do with her being trans. She’s iconic, period.

Obviously, Nyla Rose signing with AEW helped bring trans wrestlers to the main stage. Within the trans community, how big was that moment to helping legitimize (for lack of a better word) trans wrestlers in the industry? Do you still find pushback?

It’s wonderful and she’s done brilliantly. There’s still push back. When there was one black president in 250 years, ignorant people said “well racism’s over”. My perception may be skewed, but reading responses the reaction seems the same. To transphobic people, we’ve already been given more than they think we deserve. Does it legitimize me as a wrestler? No. Only I can succeed or fail at that. 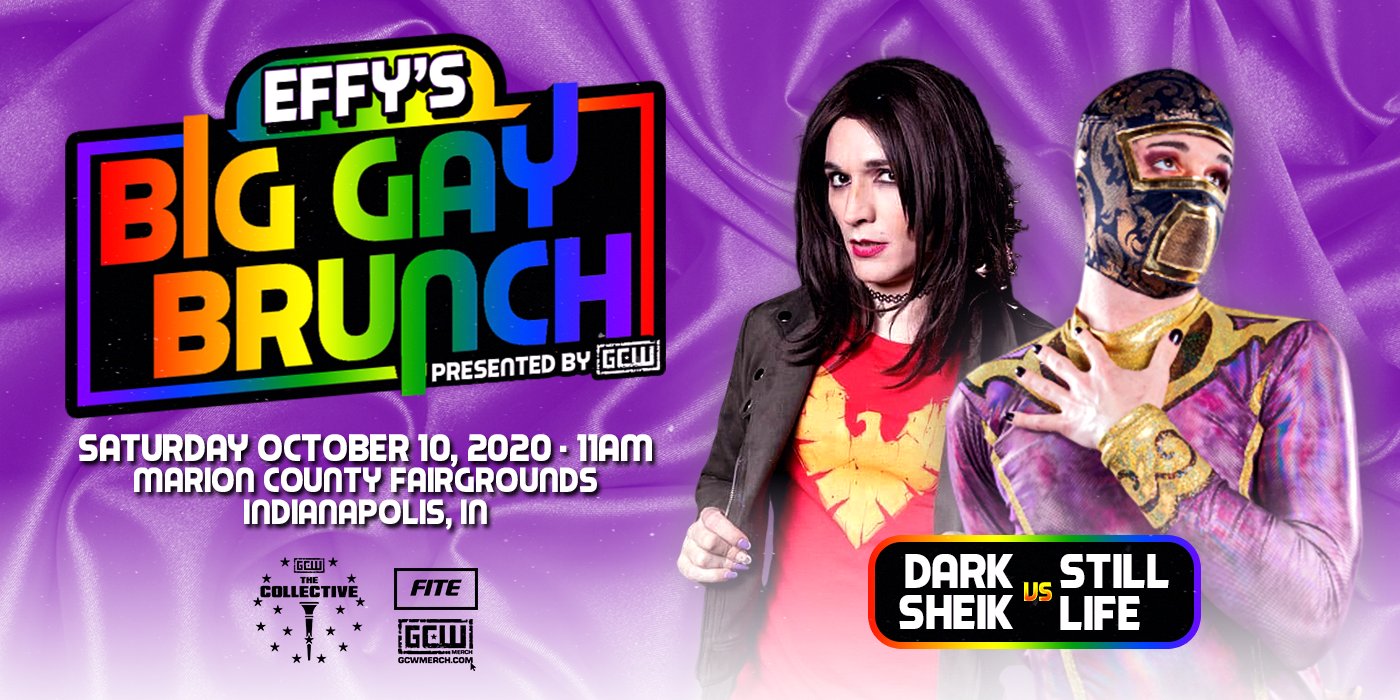 You made your GCW debut at EFFY’s Big Gay Brunch in a great match with Still Life With Apricots and Pears. How did it feel to be on such a historic card and to make your presence known on a larger scale?

It was magical. It’s my only match since March and it did wonders for my mental state. To be around all those amazing people really lifted my heart. To then have that match with someone I love and admire so much meant the world to me. Effy did give me such a gift. Still Life is a treasure and I’m grateful I got to have that moment with her.

Your newest project is the launch of The Church of Wrestling. What’s the mission statement of the new website?

The message and goals are written at [the website]. The site says that I find peace within wrestling and I want to help others find that. It is my gift to wrestling. Its long been considered sport, entertainment, business, and beyond. I’ve added to that list the more spiritual connector of religion. It’s something I feel very strongly about and look forward to talking about when the opportunity is presented.

With such a boom in LGBTQ+ pro wrestling during the pandemic, as far as so many stars finally getting some recognition, do you have the itch to travel to more areas in the country once the pandemic lifts enough?

More? Sure. I was already traveling a lot but it’d be great to see more diners and bars and waffle houses. I hopefully will be more international, too! Fuck it, let’s do a show on the Moon and do Earthsaults.