Disclaimer: This article was updated to reflect a name change from Still Life to Edith Surreal, which occurred on March 4th.

Indie Watch is our regular series that looks at all of the amazing talents working the independent circuits around the world. Some are veterans revitalizing their careers, some are indie prospects hitting their peaks, while others are names to be on the watch for! In this edition, we take a look at the emerging artistry of Edith Surreal (FKA Still Life With Apricots & Pears) as she heads into 2021 as one of the U.S. indies’ most explosive young stars.

With the demise of CHIKARA in 2020, many of the company’s stars – many of whom had been primarily exclusive to the long-running promotion – suddenly found themselves without their principal canvas. With characters that were eccentrically overblown, some found their characters simply did not work outside of CHIKARA and so they rebranded with new personas. But others forged ahead with their established identities and expanded their journey into the world of professional wrestling, determined to continue on the path they had previously chosen. One of those wrestlers was the artistic masterpiece known as Still Life With Apricots & Pears. Only a four-year pro, Still Life, now wrestling under the name Edith Surreal, exploded out of the ashes of CHIKARA in 2020 and is poised to become one of the most innovative and engaging talents in the U.S. indies in 2021. 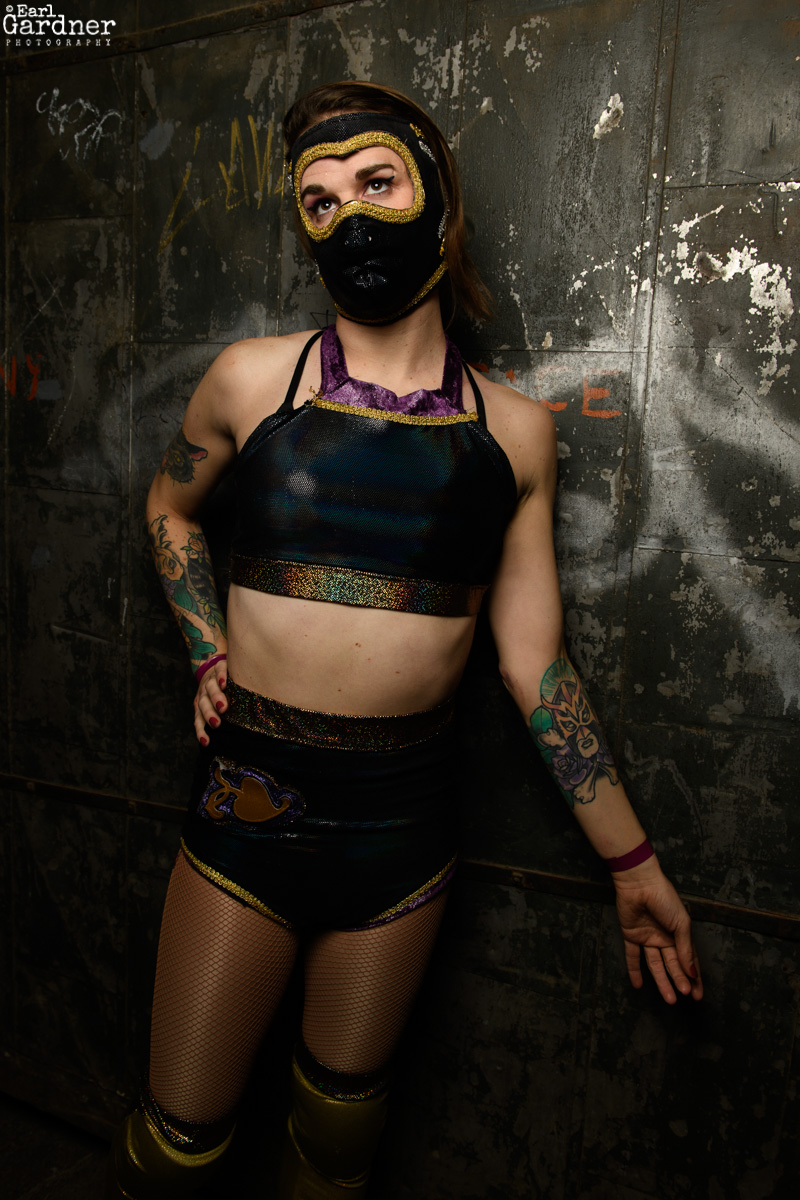 Edith Surreal began training in 2017 with CHIKARA in her hometown of Philadelphia, Pennsylvania, where she was trained in the art of pro wrestling by some of the world’s top grapplers – names like Drew Gulak, Ophidian, Hallowicked, Orange Cassidy, Chuck Taylor, and Cheeseburger (recently rebranded to The World Famous CB) all had a hand in training her in the squared circle. After months of training, it was time for her to make her in-ring debut. Conceived as a creation of the wrestler BLANK (the new identity of former CHIKARA tag team champion Race Jaxon and side character of indie star Logan Easton LaRoux), she made her debut in February 2018 as Still Life With Apricots & Pears when she was unveiled alongside Ursa Minor In The Night Sky as BLANK’s other masterpiece. Together, the two became a tandem known as Nouveau Aesthetic. They debuted on CHIKARA Hour of Power 13, picking up the tag team win over Xyberhawx2000 (Nytehawk & Razorhawk). The following week, she had her debut singles match, defeating The Proletariat Boar of Moldova. For the rest of the year, she competed both in tag team matches as well as singles action, competing on main CHIKARA PPVs and episodes of Hour of Power.

A year after her debut, Still Life With Apricots & Pears had proven she was one of CHIKARA’s most exciting new stars, and in March of 2019, she won the CHIKARA Young Lions Cup XV tournament, defeating Boomer Hatfield in the finals, holding the championship for 308-days, defending her title against the likes of Carlos Romo, Brayden Lee, Allie Kat, and many more. Still Life compiled an amazing record of 18 wins and two losses in CHIKARA in 2019 (losing only to BLANK and Solo Darling) for a monstrous run in the promotion she was “born” in. But 2019 wasn’t just a big year for her in CHIKARA. While she’d dabbled with a few regional indies in 2018, in 2019 she began to expand outside of the CHIKARA Universe with more adventure, taking her artistic vision across the country. Soon she was working in Washington, DC with Prime Time Pro Wrestling (PTPW), California with Hoodslam, as well as debuts with Black Label Pro, Freelance Wrestling, Pizza Party Wrestling, and more. She also made her Beyond Wrestling debut during the first season of Uncharted Territory, teaming with BLANK as Nouveau Aesthetic to face All Elite Wrestling‘s duo of Chuck Taylor & Orange Cassidy.

Still Life With Apricots & Pears had one final match with CHIKARA in early 2020, just before the pandemic hit, but soon not only CHIKARA, but many of the promotions she was beginning to find work with were shut down due to the effect of COVID on the industry. Her last match before the lockdown was with PTPW in early March, a victory over Lady Frost. Just as her momentum was on its grandest upswing, the world came to a grinding halt for independent wrestling. During her downtime, CHIKARA ceased operations and suddenly her home promotion and locale for most of her career was gone. But luckily, camp opened up. As in Camp Leapfrog, the brainchild of “Kid Ref” Kris Levin and others, who adopted many of CHIKARA’s rising young stars of the past couple of years, and integrated into a fun “summer camp” style environment. On the first event in August, she defeated Cheeseburger. Since then, she has become one of the feature attractions throughout Camp Leapfrog’s series of events, including a banger against EFFY at this past Valentine’s Day’s Camp Lovefrog,

But 2020 didn’t stop there. While Still Life found a bold new home promotion, she also returned to Beyond Wrestling in September, and that same month took part in MV Young‘s PolyAm Cult Party II, produced by Uncanny Attractions, where she faced Molly McCoy. In October made her Game Changer Wrestling (GCW) debut as part of The Collective, facing off against West Coast indie legend Dark Sheik in one of 2020’s matches of the year during EFFY’s Big Gay Brunch. She returned to GCW this past January to take part in GCW Fight Forever, the record-breaking 24-hour live event, where she competed twice – during Camp Leapfrog’s Cibernetico block and then during Effy’s Big Gay Block. She’s slated to take part in Enjoy Wrestling‘s debut series, Uncanned Heat, as part of the Enjoy Wrestling Cup tournament, and was just announced as an entrant in GCW’s Acid Cup 3 over WrestleMania Week, an annual tournament named after the late indie pioneer Trent Acid, that showcases the top indie talents in the country. She’s also reuniting with BLANK in Nouveau Aesthetic to take part in Beyond Wrestling’s Tournament For Tomorrow tag team tourney, which will be part of Beyond’s new Signature Series on IWTV.

It was during Enjoy Wrestling‘s Enjoy Cup tournament in March 2021 that Still Life would undergo her latest metamorphosis. After being unmasked by Ziggy Haim, Still Life would retreat to the backstage area. That evening, she revealed on Social Media that with the desecration of her canvas, the art would now become the artist, revealing her new persona, Edith Surreal. Edith Surreal has emerged as one of CHIKARA’s top stars from its last generation, been a part of the national renaissance of the dynamic and profound LGBTQ+ wrestling scene, and transcended all of that to legitimately become arguably one of the top talents in the US independent scene today – and definitely someone you should be paying attention for the rest of the year and into the future.