Returning to the Pro Wrestling HEAT-UP dojo will be the stars of ChocoPro! Gatoh Move Pro Wrestling is set to hold a series of three events over three consecutive days, each show set to showcase the action ChocoPro fans expect. In addition to a big singles match featuring Mei Suruga, Gatoh Move’s “Big Apple,” we will see two tag team encounters with intrigue behind them. For those that may be on the fence about watching ChocoPro #104 on the official Gatoh Move YouTube channel, here is what to expect. 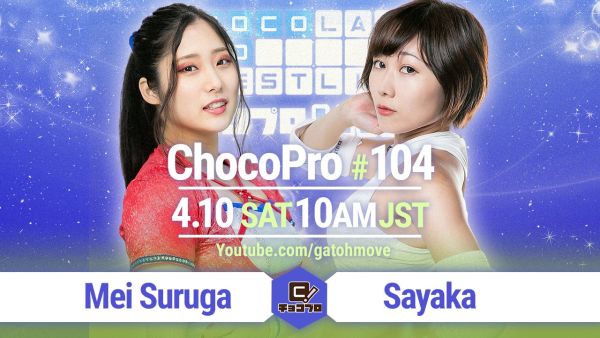 Kicking off ChocoPro #104 will be a big test in the young career of Sayaka. This fourth-generation Gatoh Move star made her big return to the promotion during the two-day 100th episode event. While she came up short in both tag team matches she wrestled in, she showed that she was back and more driven than ever. To pick up a singles victory would be huge for Sayaka. With that said, such an endeavor may be difficult given the caliber of opponent she’s up against. As one half of the Asia Dream Tag Team Champions, Mei Suruga has been on a roll, though a loss to Antonio Honda on the previous episode halted her momentum. Can she pick up the pace with a win over Sayaka? 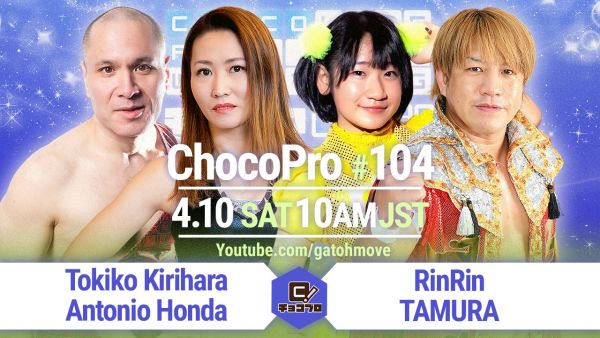 Tokiko Kirihara and Antonio Honda vs. Rin Rin and TAMURA

Collectively known as “Black Comaneci,” the duo of Tokiko Kirihara and Antonio Honda is a unique one. Combining Kirihara’s mixed martial arts background and Honda’s wily approach, one wouldn’t expect them to form such a solid team. However, they’ve fared well in ChocoPro; on the aforementioned 100th episode, they defeated Pencil Army‘s own Lulu Pencil and Chris Brookes, otherwise known as “Chris Pencil.” On ChocoPro #104, they will face the duo of Rin Rin and TAMURA. As another fourth-generation talent and Pro Wrestling HEAT-UP founder, respectively, this is another team that many wouldn’t expect to form. Otherwise known as “TamTamRinRin,” they battled Best Bros on ChocoPro #102 when TAMURA made his return to Ichigaya Chocolate Square. Expect this encounter to be anything but straightforward. 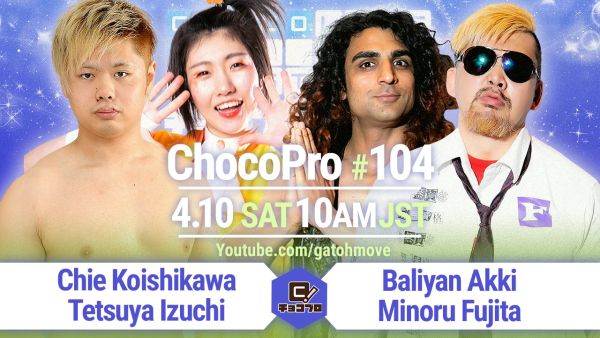 The main event of ChocoPro #104 will be nothing short of interesting. On Day Two of ChocoPro #100, Baliyan Akki, one half of the Asia Dream Tag Team Champions, faced deathmatch veteran Minoru Fujita. In this main event encounter, the vacant Super Asia Championship was on the line. This was a heated encounter, bringing the best out of both men. Despite Akki being at the top of his game, it was Fujita that came away with the Super Asia Title. When Gatoh Move founder Emi Sakura decided that they would team up on this upcoming episode, to say that Akki was stunned would be an understatement. In other words, Akki and Fujita may not be on the same page.

With that said, the duo of Chie Koishikawa and Tetsuya Izuchi draws intrigue. Izuchi, being one half of the HEAT-UP Universal Tag Team Champions, has made numerous Gatoh Move appearances since 2016. However, this is only his second-ever ChocoPro appearance; his first was episode #101, where he teamed up with fellow HEAT-UP talent Hiroshi Watanabe to face Best Bros in a losing effort. On this upcoming show, he will team with a new partner in the form of Chie Koishikawa. To say that her energy is her trademark would be an understatement. Furthermore, she is coming off a major tag team victory with Hagane Shinnou from the previous episode. Can Koishikawa and Izuchi work together to face a team with as much tension between them as Akki and Fujita?