For ChocoPro fans in North America, episode #103 will air on the evening of Easter Sunday, providing solid entertainment following the festivities. Furthermore, this will be the third show in a three-day span that Gatoh Move Pro Wrestling has held, completely uninterrupted. While the first of these shows took place in the Pro Wrestling HEAT-UP dojo, the second returned to form at Ichigaya Chocolate Square. The third event will follow the latter, featuring two exciting match-ups. Take a deep dive into the action to come on ChocoPro #103. 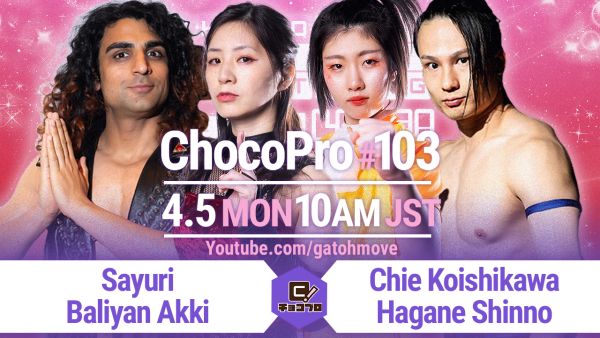 Though he is often seen teaming with Mei Suruga, as Asia Dream Tag Team Champions, Baliyan Akki will work alongside a unique opponent in Sayuri on ChocoPro #103. As the “Ninja” of Gatoh Move, Sayuri’s stealthy offense has allowed her to carve a character all her own. Furthermore, this match marks the first time Sayuri and Akki have teamed since ChocoPro #61, which took place this past November. On this particular episode, they lost to the duo of Chie Koishikawa and Antonio Honda. Looking to pick up a tag team victory for themselves, Sayuri and Akki will have a tall challenge ahead of them.

Between the energetic disposition of Chie Koishikawa and the stoic approach of Hagane Shinnou, the contrasting personalities at play can’t be understated. However, as the team affectionately known as “Egg Tarts,” Koishikawa and Shinnou have seen a fair amount of success. Case and point, on Day 2 of ChocoPro #100, they picked up a win over the “Ninja” and “Dragon” in Sayuri and Chon Shiryu, respectively. With a win over Sayuri and Akki, perhaps “Egg Tarts” will inch that much closer to a shot at the Asia Dream Tag Team Titles. 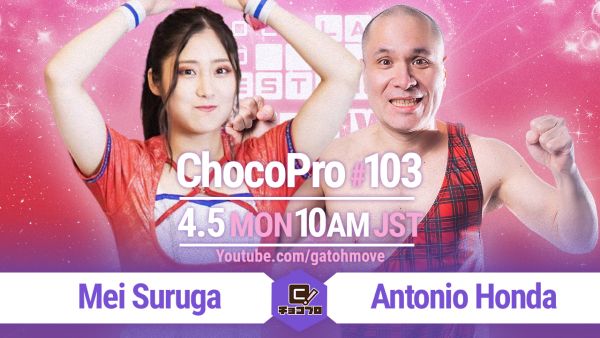 Previously announced on ChocoPro #102, Mei Suruga will battle Antonio Honda in singles competition. Though she is currently one half of the Asia Dream Tag Team Champions, one shouldn’t count out “Mei-chan” as a singles competitor. In addition to being one of the featured stars in Gatoh Move, she’s been a prominent fixture in Tokyo Joshi Pro Wrestling, not to mention the AEW Women’s World Championship Eliminator Tournament earlier this year. If there’s anyone that can overcome the wily offense of Honda, it would be “The Big Apple” herself.

Meanwhile, Honda has found himself busy in Dramatic Dream Team in recent weeks, specifically in regard to the DDT Ironman Heavymetalweight Championship. It’s important to note that, as of this writing, he has won the title a staggering 18 times. However, he has made time to appear in ChocoPro, being one of the most dominant competitors on the show. As experienced as Honda is from bell to bell, he isn’t above receiving help from his equally sly ally, Gon the Fox. If Suruga intends on picking up the victory on this episode of ChocoPro, she will have to keep an eye out for Honda’s trademark trickery.