This past weekend, Gatoh Move Pro Wrestling held its landmark ChocoPro #100 two-day event. To say that this was monumental for the little promotion would be an understatement. In addition to action from Gatoh Move regulars and guest stars alike, viewers saw a new super Asia champion crowned. ChocoPro #101 keeps the action rolling, though under intriguing guidelines. This show will be a collaboration between Gatoh Move and Pro Wrestling HEAT-UP.

To provide context, Pro Wrestling HEAT-UP is a Japanese wrestling promotion owned by Kazuhiro Tamura, or simply TAMURA. The promotion in question was founded in 2012, its mission statement being to produce matches so “hot” that viewers could feel them, hence the name, HEAT-UP. Gatoh Move talent have competed for HEAT-UP in the past, and on ChocoPro #101, stars from both organizations will be showcased. Here’s a rundown of what to expect. 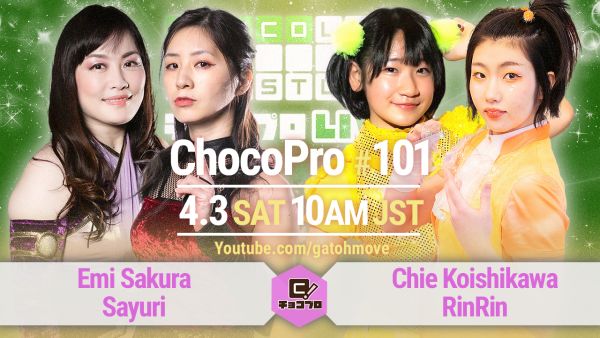 Emi Sakura and Sayuri vs. Chie Koishikawa and Rin Rin

In this collaborative event between Gatoh Move and HEAT-UP, this will be the sole match where only the former is represented. ChocoPro #101 will open with Emi Sakura and Sayuri joining forces to take on the fourth-generation tandem of Chie Koishikawa and Rin Rin. Both Sakura and Sayuri saw their fair share of success on ChocoPro #100, though the same can be said for Koishikawa. Meanwhile, Rin Rin was the only one who came up short during her ChocoPro #100 day two match. Nonetheless, one shouldn’t count “MC” Rin Rin out, as she will enter HEAT-UP’s domain with the intent to win. Expect this to be an exciting opening match. 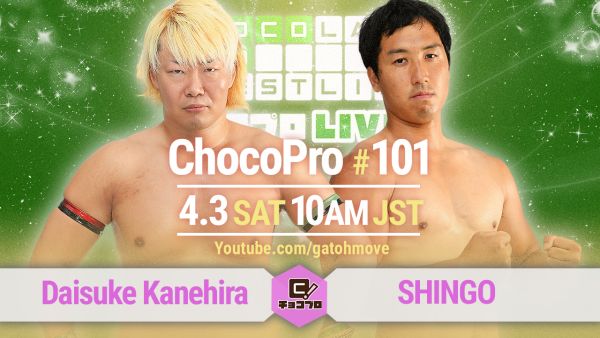 Next on ChocoPro #101, Daisuke Kanehira will take on SHINGO in singles action. Kanehira is one half of the HEAT-UP universal tag team champions alongside Tetsuya Izuchi, who will be competing in this show’s main event. Kanehira has wrestled for HEAT-UP since 2014, even winning the promotion’s Universal Championship in 2018. Many have considered him the “Ace” of HEAT-UP. Prior to becoming a wrestler, he was involved in MMA, winning over 40 fights. On ChocoPro #100, he will take on SHINGO, who was a professional cyclist before entering wrestling. It was in 2018 when he entered the HEAT-UP dojo, his dream being to become a wrestler. It’s important to note that Kanehira and SHINGO have worked together in the past. Last month, they teamed up to pick up a win over TAMURA and Raimu Imai. Now that Kanehira and SHINGO are opponents, what will come of this encounter? 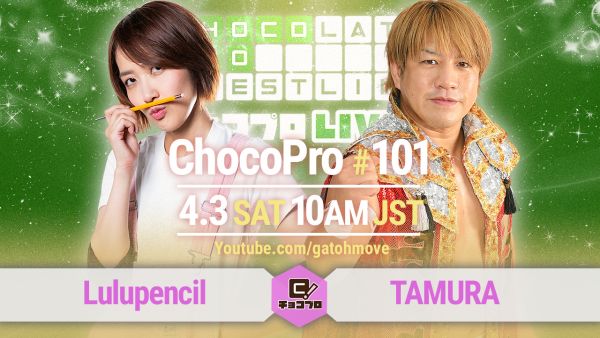 No ChocoPro event would be complete without involvement from the General of Pencil Army. Lulu Pencil had a prominent spot on both days of ChocoPro #100, and while she failed to win on either day, her trademark earnest approach and unorthodox offense were on full display. On this episode, she will battle the founder of HEAT-UP himself, TAMURA. In addition to making his share of appearances for Gatoh Move, TAMURA is the current universal champion, a title that he has held twice. TAMURA won the title for the second time in August 2019 in a match against Mad Dog Maxx. Additionally, TAMURA has faced off against many notable names in Japanese wrestling, including Minoru Suzuki and Tatsumi Fujinami. Given Lulu Pencil’s unconventional wrestling style, TAMURA’s grounded, technical approach should make this bout nothing short of interesting. 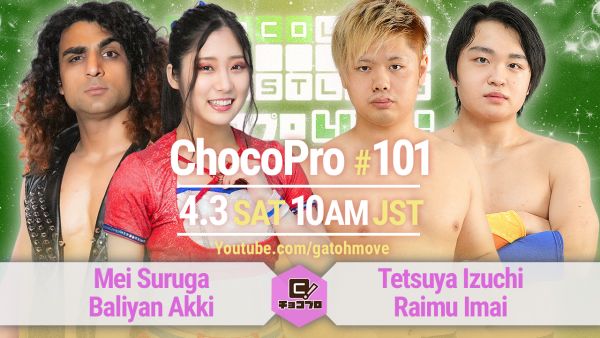 ChocoPro #100 could best be described as bittersweet for Best Bros. While they were successful in retaining the Asia Dream Tag Team Championship on day one, day two didn’t yield the same fortune. Not only did Mei Suruga fall to current TJPW star Mizuki, but Baliyan Akki lost in the Super Asia Championship main event to Minoru Fujita. Simply put, Best Bros took the good with the bad. However, ChocoPro #101 will mark a new beginning for Suruga and Akki, as they enter this show’s main event to take on a team looking to give their guests a welcome they won’t soon forget.

On this episode, Best Bros will battle the duo of Tetsuya Izuchi and Raimu Imai. Alongside Kanehira, Izuchi serves as one-half of the HEAT-UP universal tag team champions; they won the titles in a tournament final match against Hide Kubota and Kenichiro Arai. Armed with a vicious German suplex, Izuchi is a legitimate fighter as well, having trained in jiu-jitsu. Teaming with Izuchi, on ChocoPro #101, will be Hiroshi Watanabe, a veteran wrestler in HEAT-UP and throughout Japan. Prior to this, he was a trainee under New Japan Pro Wrestling, developing a more traditional approach to professional wrestling. Boasting a devastating backdrop, Watanabe is a strong partner for Izuchi as they prepare to take on Best Bros.