With the two-day special episode of ChocoPro #100 fast approaching, Gatoh Move Pro Wrestling isn’t slowing down. On episode ninety-six, viewers will be treated to three exciting matches within the confines of Ichigaya Chocolate Square. In addition to two singles encounters, each featuring an Asia Dream Tag Team Titleholder, a big tag team main event will take place. Here is what viewers can expect heading into this upcoming episode of ChocoPro. 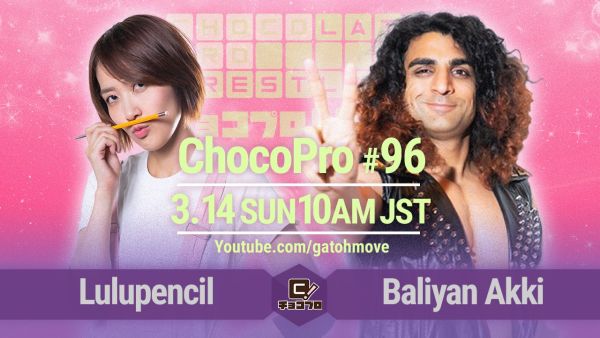 This isn’t the first time that the Pencil Army commanding officer will square off with the high-flying star from India. Lulu Pencil and Baliyan Akki have faced each other in multiple singles encounters, the most recent being episode fifty-eight this past October. Though Lulu Pencil put forth a valiant effort, it was Akki that was able to emerge victorious. Lulu Pencil’s offense is nothing short of unorthodox, as she can outwit her opponents despite being physically weaker than most of them. On the other hand, Akki’s offense is more straightforward, as he utilizes a series of strikes and aerial maneuvers to keep his opponents on edge. Smart money is on the one half of the Asia Dream Tag Team Champions emerging victorious, though one shouldn’t count out the pink baseball cap-wearing freelance writer. 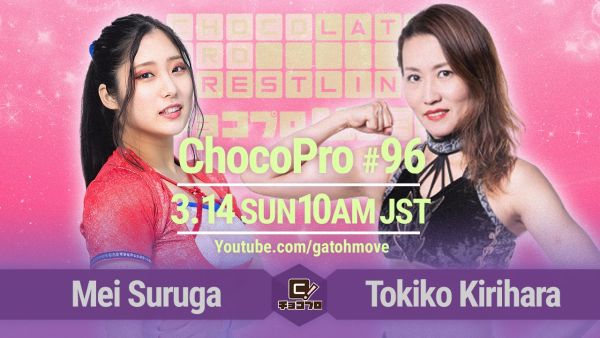 In another singles match featuring an Asia Dream Tag Team Champion, titleholder Mei Suruga will battle Tokiko Kirihara. Of all the fourth-generation Gatoh Move stars, Kirihara is the most physically imposing. Armed with a mixed martial arts background, “Otoki-san’s” use of submissions and strikes has worked to her benefit, often being the one to pick up victories over her fourth-generation peers. However, Suruga has been on a roll as of late. In addition to her consistent appearances on ChocoPro, she is still riding a wave of momentum courtesy of her involvement in the AEW Women’s World Championship Eliminator Tournament. Simply put, “Mei-chan” is one of the biggest names in Gatoh Move. Between the speedy wiles of Suruga and the hard-hitting approach of Kirihara, something has to give. 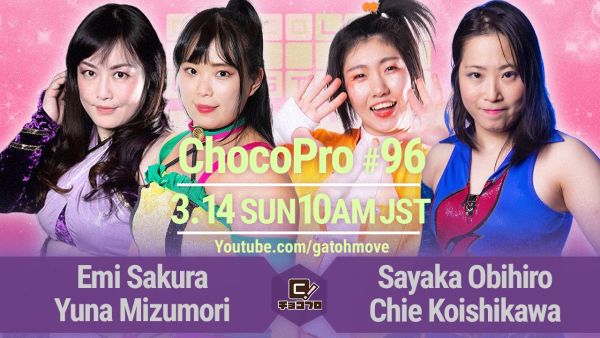 Beauty as Is is a team that’s nothing short of formidable. The duo of Emi Sakura and Yuna Mizumori previously teamed on episode ninety-four, where they defeated Mei Suruga and Antonio Honda, Yunamon getting the surprise pinfall victory over Honda. Given the fact that the deceptively crafty Honda has seldom lost in Ichigaya Chocolate Square, this victory was huge for Gatoh Move’s “Pineapple Girl.” Bringing together experience and power, Sakura and Mizumori may be in contention for the Asia Dream Tag Team Championship soon.

The road toward championship gold won’t be without its bumps in the roads, however. On this upcoming episode of ChocoPro, Beauty as Is will battle the team of Sayaka Obihiro and Chie Koishikawa. These two ChocoPro regulars have teamed multiple times prior. Their most recent outing took place on episode seventy-nine, which saw them defeat the Pencil Army duo of Sakura and Lulu Pencil. One can argue that the energetic Koishikawa looks up to the “Blue Heart” of Gatoh Move as a mentor, soaking in as much knowledge as possible to become better.

Regardless of who wins this match, it may have strong implications moving forward. As stated earlier, Beauty as Is may be looking to attain the Asia Dream Tag Team Titles; another victory would move them that much closer. Conversely, a win for Obihiro and Koishikawa would bolster their momentum, not only as a team but singles wrestlers as well. For these reasons, this ChocoPro main event will be that much more important.